Member of the Nihil

Reunite with Zeen and leave the Nihil behind (abandoned).

Kamerat was raised by the nomadic Elders of the Path, a religious group who strongly believed that the Force shouldn't be harnessed by living beings. He was best friends with Zeen Mrala, a girl who had a strong connection with the Force which she kept secret from everyone including Krix. Eventually Trymant IV, the world that Kamerat and Mrala were living on, came under threat from an Emergence which saw debris hurtle toward the planet from hyperspace.

During the chaos, Mrala exposed her Force-sensitivity to protect the planet. Kamerat disavowed their friendship and escaped Trymant thanks to Marchion Ro, the leader of the marauder gang called the Nihil who had came to the world in order to evacuate one of the leaders of the Elders of the Path. Kamerat subsequently joined the Nihil, and although he initially had a change of heart and sought to return to Mrala, a hostile encounter with her on the moon Quantxi firmly placed him into the hands of the Nihil.

Krix quickly became a favorite of Ro, who saw himself in the boy and gave him command over a Nihil outpost despite his youth. Over the next year and a half, Kamerat worked closely with Ro and was privy to many of his decisions and meetings. During that time he developed a rivalry with Nan, a girl several years older than him who also worked directly under Marchion.

Krix Kamerat was a human male born into the Elders of the Path, a culture that taught its members that the Force shouldn't be harnessed by living creatures. His culture didn't believe in parent-child relationships, and as such Krix was left to be raised by the Elders and never knew his parents. Growing up, Kamerat was best friends with a Mikkian girl named Zeen Mrala. The Elders of the Path were primarily a nomadic group, and as such Krix and Zeen spent the first ten years of their lives moving from place to place. Eventually Kamerat and his friend settled on the planet Trymant IV, a place they came to consider home.

Some years after Kamerat settled on Trymant IV, the planet came under threat from an Emergence. The Emergence occurred when debris emerged from hyperspace at near-light speed and threatened to crash into Bralanak City, Trymant's most populated settlement. When the debris began to fall Krix led Zeen to a meeting house where the Elders had called a meeting, hoping they would know what to do. As they approached the building, a ramshackle ship emerged from the atmosphere.

Kamerat and Zeen went to investigate the vessel and discovered Elder Tromak conversing with the occupants, members of the pirate gang called the Nihil. Krix tried to approach the group, but his path was barred by the armed thugs who were guarding the ship. As Tromak tried to convince the Nihil to let Krix and Zeen join them, members of the Force-wielding Jedi Order arrived. A fight broke out between the Jedi and the Nihil, during which Mrala used the Force to stop a large piece of debris from killing everyone present.

Kamerat felt betrayed by his friend, who had kept her connection to the Force secret from him. Tromak grabbed hold of Krix and brought him onto the side of the Nihil as the leader of the pirates, the Eye of the Nihil Marchion Ro, descended from the ship. Tromak managed to convince Ro to let Krix accompany them, even though the boy was hesitant to leave Zeen behind. When Kamerat entered the Nihil vessel, he was confronted by a Jedi Master who had snuck on board named Yoda.

Yoda gave him a communication device, so that when the time was right he could contact Zeen if he sought to. The Nihil, having retrieved Elder Tromak, fled from Trymant. As they entered the atmosphere, a fleet of Republic vessels blocked the Nihil's path. Ro ordered his ship to fire on a Republic medical frigate, forcing the rest of the fleet to break formation and assist the wounded vessel. With their path clear, the Nihil fled into hyperspace.

In the week following the Trymant IV disaster, Kamerat was brought aboard Marchion Ro's massive flagship the "Gaze Electric." He received a message via his secret communication device from Mrala saying that she wanted to reach out, although Krix responded by venting his frustrations towards her. Kamerat was summoned to the bridge of the Electric, where Ro ordered that he and Tromak be sent "the rink" as the Elder had refused to give the Eye of the Nihil the information he sought.

As they were escorted to the rink, Tromak explained that Ro wanted the location of an ancient relic the Elders had sworn to keep hidden. Kamerat managed to convince Tromak to tell him the relic's location. They entered the rink, which was a battle arena where the pair would be forced to fend for their lives atop large creatures called bogaranths. As the battle begun however, Ro intervened and announced that there was a Republic spy among them, as he had discovered Kamerat's communication device.

Determined to survive no matter what, Krix accused Tromak of being the device's owner. The Eye had Tromak carried out to be killed and ordered Krix to come to his personal chambers. Ro revealed that he knew Krix was the true owner of the communication device, and that although he respected Kamerat's survival instincts, the device would allow the Jedi to track their location. Kamerat was assured by the Eye that he could still redeem himself, if he helped lure the Jedi into a trap. Although reluctant, Krix agreed.

Kamerat subsequently cemented himself even closer by the Eye of the Nihil's side, becoming a distinguished member of his inner circle despite his youth and lack of experience. He also formed a rivalry with Nan, a human girl several years older than him who operated as Ro's greatest informant. Roughly a year and a half after the Hyperspace Disaster, Kamerat eavesdropped on a meeting aboard the Gaze Electric held between the Eye and the Tempest Runners who served as his top lieutenants.

Part way through the discussions, Kamerat approached Nan who was similarly eavesdropping and warned her that she wasn't supposed to be in attendance. Nan rebuked that Krix also wasn't supposed to be attending, and threatened to murder him unless he stopped bothering her. Kamerat complied, albeit with a derisive snicker. As the meeting went on Ro tasked Nan with escorting the Oracle, an elderly woman who functioned as the Nihil's secret weapon, on a job.

Kamerat considered the job a likely death sentence for Nan, as he knew that if the Oracle died of natural causes while Nan was guarding her then the latter would have to pay for her failure with her life. As Nan left the room to begin her assignment, Kamerat smiled sadistically at her. 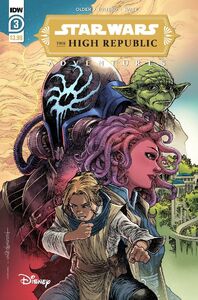 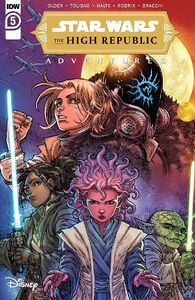 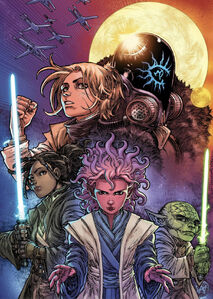 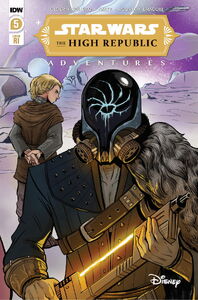 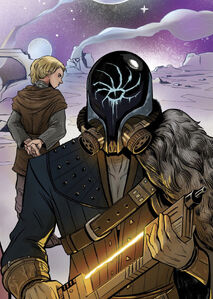 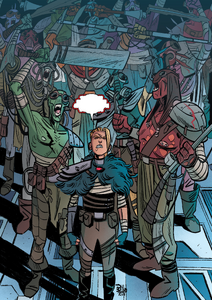 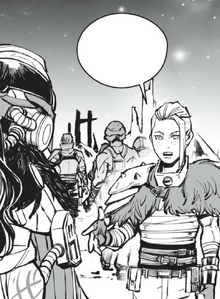