Right-Hand
Krok is an antagonist in Generation One of The Transformers, based on a figure from the 1990 toyline. He is the secondary antagonist of Marvel's "End of the Road" storyline.

Krok was briefly seen in Issue #74 among the Transformers gathered on Cybertron for the battle with Unicron, but did not appear prominently until the aftermath of the battle. As a result of the massive casualties the Decepticons had suffered, Krok became the second-in-command to new leader Bludgeon.

Like Bludgeon, Krok had no interest in continuing the truce with the Autobots and was only playing along with the joint assemblies to discuss evacuating Cybertron, which had apparently suffered terminal damage during the battle. Both of them felt the truce would break down eventually. They chose to sabotage the Autobots' shuttles, leaving them behind to die, and let the other Decepticons know that, instead of settling on an uninhabited world as Autobot sub-commander Prowl had proposed, they would find a world to conquer.

After choosing the planet Klo, largely at random, Krok acted as a co-ordinator as the Decepticons stormed the planet, killing many of the peaceful inhabitants with no casualties aside from a case of friendly fire. Krok reported the success to Bludgeon, as well as revealing that the Autobots had planted a tracking device on their ship and so were probably on their way. Krok was not seen during the subsequent battle, leaving his fate unknown. 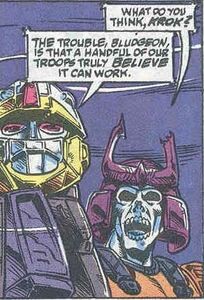