Are capable of travelling through space through advanced technology.

Are skilled in advanced science and genetic engineering.

Tampering with the evolution of over a thousand of species.

Continue to genetically experiment on members of various species (ongoing).

Create a scientifically advanced race of super warriors and sell them at the highest bidder (ongoing).

The Kroloteans are a hostile alien race in the DC Comics universe. They are enemies of Venizz, Tagort Tagort and Hal Jordan.

The Kroloteans originate from the planet Krolotea in Space Sector 2812. They perform cruel and unethical genetic experiments on members of different species in order to create a scientifically advanced race of super warriors and sell them at the highest bidder. They had no compunctions on manipulating the evolution of other species as part of their experimentation's so long as it produced highly destructive "weapons" which they could sell to their clients. At some point, they began arriving on the planet Earth where they became known as Gremlins. They are responsible for the experiments done on Hector Hammond, Black Hand, and The Shark.

The Kroloteans had began terrorizing the coast. This attracted the beast to take both subjects on board their ship for further testing. The Kroloteans experiment on Hal Jordan when the Green Lantern trap the Gremlins in small cages to which that the Kroloteans tampered with the aid of Black Hand. They were defeated and were handed over to Venizz and Tagort for their genetic atrocities. 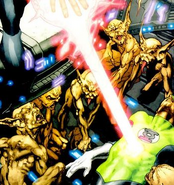 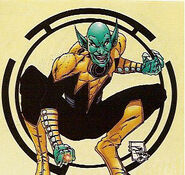 Gleen a Krolotean and member of the Sinestro Corps