Researching the nature of reality

Learn the secrets of the multiverse.

Destroy the Guardians of Oa (all failed).

He was once a Maltusian Guardian that, in his endless curiosity to study and learn the secrets of the universe, created a machine which allowed one to travel back in time and witness the Big Bang. However, the machine malfunctioned and resulted in the creation of the multiverse and the Monitors. For committing the ultimate taboo of tampering with reality, his fellow Maltusians banished him from their ranks and transformed him into a formless energy meant to circle the entire multiverse. Out of guilt for Krona's crimes, the Maltusians split into three groups, being The Guardians of the Universe, the Controllers, and the Zamarons. However, Krona swore revenge against the Maltusians and promised to return to wreck havoc against all they've created.

Krona is responsible for the creation of the Anti-Monitor and the existence of evil itself, making him the overarching antagonist of the Pre-Crisis and Crisis era of the DC Universe.

Ten billion years ago, Krona, one of the most brilliant of all the Maltusian scientists, decided to break the ancient edict and probe the origins of universe itself. Krona constructed a machine capable of piercing the temporal barrier and viewing the beginnings of time itself. As he watched time peel away, Krona caught a glimpse of the hand of creation depositing the speck that would become the entire cosmos. At that instant, his machine exploded and the universe was shattered.

The universe then infinitely replicated itself. At this same moment, the Anti-Matter Universe was created, unleashing evil into the cosmos; thus, the Monitor and the Anti-Monitor were born. The Oans severely punished Krona for his misdeeds, turning him into a bolt of energy and sending him to forever wander the cosmos.

Krona was the main antagonist of the crossover comic event between the Justice League and Marvel's Avengers. In his search for the origin of the universe he destroyed hundreds of realities until he came to the Marvel Universe. There he met the Grandmaster, who challenged him to a game for the fate of that universe. The two cosmic beings forced the Justice League and Avengers to gather many powerful relics across both worlds, competing against each other to gather the most. Although Grandmaster won the game, Krona became furious and mortally wounded him, then proceeded to summon Galactus to learn the origin of the universe from him. After he killed Galactus, Krona wrecked havoc with reality. The Grandmaster had trapped Krona between the universes using the 12 items of power, but Krona began accelerating the process, threatening to destroy both universes. Krona intended to cause a new Big Bang he would learn the secrets of. The JLA and Avengers teamed up to stop him. Krona summoned mind-controlled villains from both worlds to hold back the heroes. He was defeated when the Flash and Hawkeye (who were previously thought dead) appeared, and Hawkeye fired a powerful explosive arrow into Krona's power source while Flash distracted him. Krona's reality fell apart and he was trapped in a cosmic egg, which the revived Grandmaster and Metron looked after.

The egg was stored in the Watchtower and monitored by the Justice League, and secretly Metron. However Krona was finally freed from the egg during the Trinity storyline.

Krona would show up in the new 52 and dc rebirth eras as the main villain of war on the green laterns. 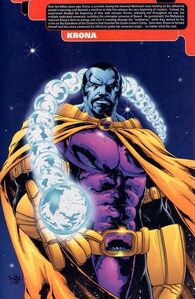 Krona in his prime. 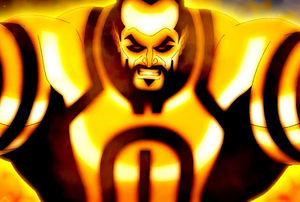 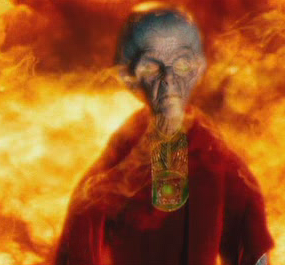 Krona in the Green Lantern movie. 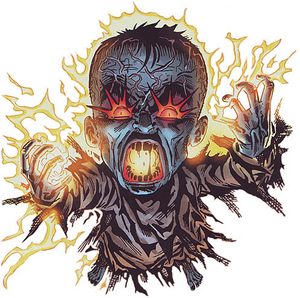