Infect all of humanity

Hostile Aliens
The Kronn are the antagonists in the 1995 arcade game Area 51 and its sequel Site 4.

0:500 A crashed alien probe is recovered and taken to a top secret military installation located in the remote Nevada desert: Area 51.

0:800 Shortly all contact is lost with the base and it is assumed an unknown alien force has taken control.

The Kronn infect Area 51 along with the workers. The only survivor sends an emergency distress signal to STAAR (Special Tactical Advanced Alien Response). Sergeant Major Marcus Bradley and a group of other commandos are sent to the compound. Upon arrival, they are greeted by an overwhelming force of Kronn life forms. They managed to destroy the aliens before seeking refuge in a nearby warehouse. Inside, there are more Kronn along with mutated humans who appear to be former employees. Every STAAR soldier annihilates a portion of the building until it is entirely vacant. Once outside, a truck drives away. One of the commandos is picked up by another member of the team. Together, they travel throughout the airfield section of Area 51. They encounter several zombies in moving vehicles.The commando is then retrieved by a chopper. He is taken directly to the administrative offices where he can assist the rest of the STAAR team. More powerful life forms are located there. Many of them are able to wield guns. The powerful Kronn and STAAR engage in hand-to-hand combat. STAAR is successful and enters a nearby elevator. Going down, they enter a computer room. Marcus activates the self destruct mechanism while the other soldiers eliminate more lifeforms. Reduced to a lower status, the remaining Kronn and zombies retreat to an underground tunnel. STAAR follows them until they reach a dead end. They encounter the alien probe which is preparing to leave planet Earth. The STAAR team shoots the probe until it explodes. Once the probe is destroyed, every member of STAAR evacuates the base before it detonates. The infestation of Area 51 ends.

The Kronn still exist. Its queen learns about the destruction of the alien probe that was sent to Earth. Furious, she and the rest of the Kronn travel to the planet. Upon arrival, they invade a warehouse and infect all of the inhabitants. STAAR detects the Kronn and dispatches a team of soldiers to annihilate the species. When the team arrives at the warehouse, they start to annihilate Kronn along with mutated humans. They travel deeper into the facility and continue to eliminate more hostile lifeforms. Along the way, they have frequent encounters with the gigantic and powerful queen. She is constantly deterred by their gunfire. The team reaches the center of the warehouse. There they find a nest of eggs which reproduces Kronn offspring. Every part of it is destroyed. The queen is the only thing left. She and the STAAR team engage in hand-to-hand combat. The queen falls from defeat and dies. Without its leader, the Kronn become extinct. 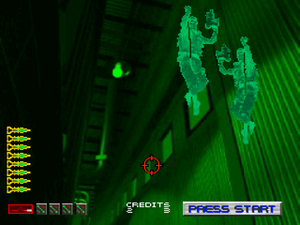 Kronn's POV.
Add a photo to this gallery
Retrieved from "https://villains.fandom.com/wiki/Kronn?oldid=3555631"
Community content is available under CC-BY-SA unless otherwise noted.