Kronos (Wrath of the Titans)

King of the Titans

King of The Titans

Ruling over Hades, Ares and The Titans.

Kill his son Zeus by making him a old and weak man.

Steal the power of Zeus and escape from Tartarus (both succeeded).
Kill Perseus to prevent him from stopping his goals.
Conquer the cosmos and humanity (both failed).

Kronos is the posthumous overarching antagonist of the 2010 film Clash of the Titans and the main antagonist of its 2012 sequel Wrath of the Titans. He is the leader of the Titans and father to Hades, Poseidon and Zeus, who would defeat him with the Spear of Trium alongside Hades' creation, the Kraken. Kronos would later conspire with Hades and his grandson, Ares, to take Zeus' power and escape so he could destroy Earth.

Kronos was the Titan god of time and was the king of the Titans, and according to the film's director, helped create the Earth. He would have children with an unnamed mate, but he would attempt kill them presumably so they wouldn't usurp him. Despite his attempts to kill his children, he was defeated by Zeus, Poseidon and Hades, who used their weapons created by Hephaestus to defeat him alongside Hades' creation, the Kraken. After being defeated, Kronos was imprisoned into the walls of Tartarus in the Underworld, where he was stripped of his powers while his children ruled humanity.

Wanting to escape from Tartarus, Kronos speaks to Hades and tells his son that he will allow him to live if he conspired to steal Zeus' power. When Hades and Ares bring Zeus to Kronos, the titan drains his son's power, and after a lengthy process, manages to break free from the mountain. Kronos continues with his plan to destroy humanity despite not having Hades on his side, as his son redeemed himself after Zeus asked for forgiveness.

While sending his Makhai to destroy Andromeda's defenses, Kronos is confronted by Hades and Zeus, who use their powers to protect Andromeda's people while waiting for Perseus to form the Spear of Trium. When hurt by his son's combined powers, Kronos proceeds to strike the ground, which critically wounds Zeus. During the battle, Kronos sees Perseus flying towards him, and attempts to kill the demigod with fire. The titan is defeated when Perseus throws the Spear of Trium down his throat, causing Kronos to explode into ash and lava, ending his short-lived reign of terror.

Kronos is the king of the Titans, father of the Gods. Kronos current physical form is composed of lava and molten rock. Lines of lava surround Kronos' body, mouth and eyes, which would suggest that the inside part of his body is completely composed of lava. He is capable of projecting massive waves of lava from his arms. It is also seen that Kronos can spawn hordes of Makhai from his very own flesh, or at least project them from the rivers of lava on Tartarus. Both Makhai and Chimeras are seen to be affiliated to Kronos rather than Hades.

According to Hephaestus, if Kronos is let loose, he has enough power to scatter the Earth over the universe. In the past, the gods needed the aid of the Kraken to defeat Kronos and the rest of the titans. It is proven that not even the combined powers of Hades and Zeus are enough to stop Kronos, as the Spear of Triam is the only known weapon capable of defeating him.

Kronos is considered, as usual, as an evil god and a bad parent. It is said that he ate his children in order to not lose his power. Despite this, he promises immortality to Hades and the others gods if they free him but it is unclear if this promise is genuine or just manipulation of his part.

Although the description above, when Kronos is released from his prison, he appears onscreen as a mindless beast who destroys anything on his path which contrasts the information's on him told earlier. 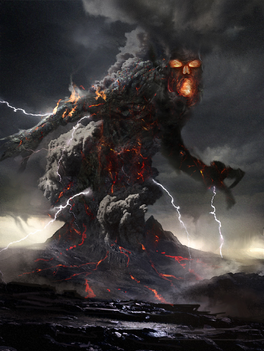 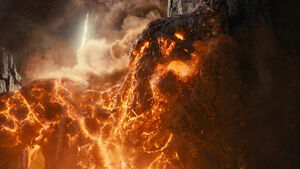 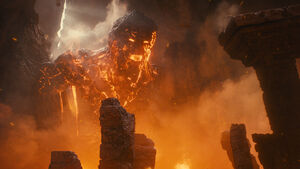 Kronos freed from the walls of Tartarus. 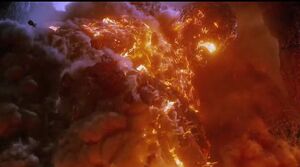 Kronos free from his prison. 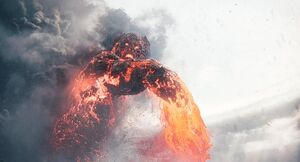 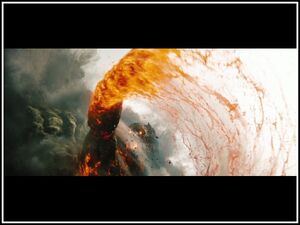 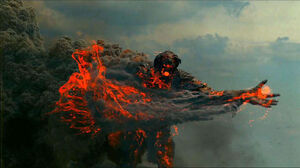 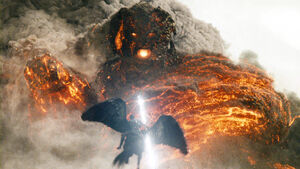 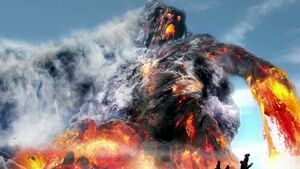 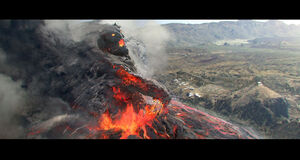 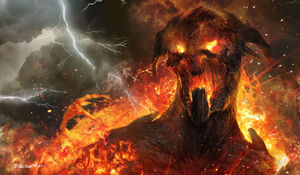 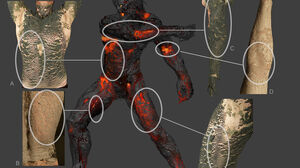