Ruling over the Titans.

Remain in a cosmic position of power at all costs (failed).

Kronos (sometimes spelled as Chronos or "C'Us") is a major figure in Greek mythology.

According to Greek mythology, Kronos (aka Cronus, or Saturn in Rome) was the youngest of the Titans, the twelve children of Gaia (the earth) and Ouranos (the sky). As the story goes, Gaia was upset that Ouranos cast her children, the cyclopes and the Hundred-handed ones into the pit of Tartarus, so she commanded her children to take the mythic Bronze Scythe and kill Ouranos and set them free. Kronos took it, castrated and killed his father, and took over, but did not free the Cyclopes or Hecatonchires (the hundred-handed giants). Kronos knew one of his children would be his downfall, as he was that of his father before him, so whenever one of his children was born, he would swallow it. Gaia planned his downfall and told Kronos's sister wife, Rhea, to decoy Kronos with a stone and take the baby, who was Zeus, and hide him.

As the story goes, Zeus grows up, creates a drink that forces Kronos to vomit up his older siblings, frees the Cyclopes and Hecatonchires from Tartarus, gets aid from one of the Titans named Themis and her son Prometheus, and engages Kronos and the the rest of the Titans in the Titanomachy for ten years. Zeus and his allies win, and Zeus chops Kronos with the Bronze Scythe and casts him into Tartarus.

Kronos was the most powerful Titan ever. He was as powerful as any of his sons (Zeus, Poseidon and Hades). Note: the latter are assumptions based on his domain, as in surviving Greek theogonous texts his powers are not described. 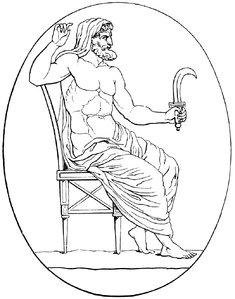 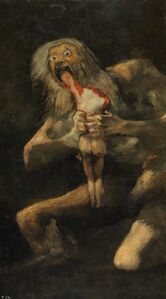 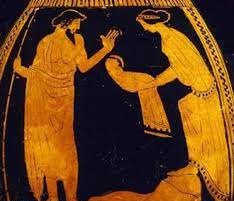 Ancient vase-work of Cronos and Rhea.
Add a photo to this gallery
Retrieved from "https://villains.fandom.com/wiki/Kronos_(mythology)?oldid=2954438"
Community content is available under CC-BY-SA unless otherwise noted.