Help Rosa Klebb exact revenge on the MI6 agency for the death of Dr. No. by killing James Bond in order to expand SPECTRE (failed).

Tov Kronsteen (Russian: Тов Кронстин, Tov Kronstin; known only as Kronsteen in the novel) is a supporting antagonist in Ian Fleming's 1957 James Bond novel From Russia with Love, and one of the two main antagonists (along with Rosa Klebb) in its 1963 James Bond film adaptation.

He is SPECTRE's Director of Planning, using his immense intellect to create many of the organization's schemes.

He was portrayed by the late Vladek Sheybal.

When first seen, Kronsteen is participating in a chess tournament. During the tournament he receives a message from SPECTRE, ordering him to arrive immediately. He continues the match until his opponent gives up, then leaves the room.

He then visits a SPECTRE headquarter where he meets with Ernst Stavro Blofeld and Rosa Klebb, while the latter indirectly him for continuing his chess game instead of arriving immediately. Kronsteen then tells Blofeld that, as he was tasked, he created a plan to steal the Lektor from the Russians. He states that in order for his plan to work, they need a female member of the Russian Kryptograph Section in Turkey and the help of the Secret Service. Klebb is ordered to select the woman, in order to make the plan work.

After assuring Blofeld that he has anticipated every possible outcome, Kronsteen tells Blofeld that his plan also ensures revenge for the death of SPECTRE operative Julius No, because the agent used by the Secret Service to get the Lektor will be the same one who killed Dr No, James Bond. Blofeld tells Kronsteen to ensure that Bond's death will be particularly unpleasant and humiliating.

After the failure of the mission, Blofeld calls both Rosa Klebb and Kronsteen before him, asking them what they have to say in their defense. Kronsteen blames Klebb for choosing the wrong people for the job whereas Klebb says that Kronsteen's plan was the reason for the failure. After hearing both, Blofeld has one of his henchmen stab Kronsteen with a poisoned blade hidden in his shoe. After Kronsteen has died, Blofeld remarks that his demise lasted 12 seconds and that one day they have to create a faster working venom.

Kronsteen during the chess tournament. 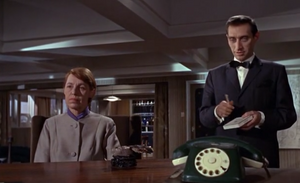 Kronsteen and Klebb before Blofeld. 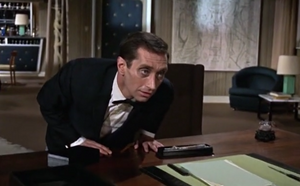 Kronsteen's death. (Blofeld: Twelve seconds. One of these days we must invent a faster-working venom.)