Turning everything black and everyone into Krockolors.

Kroodle is the main antagonist of the 2011 special Louie and the Rainbow Fairy, based on the 2005 French animated series Louie. He is a dark wizard who tries to take away all the entire world's colors, known for kidnapping the Rainbow Fairy as his prisoner.

His assistant Krobloke reported to Kroodle to know that everything is being restored by Louie's crayons. He sends Krobloke to get Louie's crayons before he becomes turned into a chicken for failing.

Upon entering Kroodle's Castle, Kroodle sends Krobloke to kill Yoko until Yoko foiled the pink crow. Later on, he shot Yoko with black magic and she turned into a Krockolor, alongside Blue Knight. Before Kroodle zaps his black magic to turn Louie into Krockolor, Louie draws a magic wand and giving it to the Rainbow Fairy and was able to defeat him. The Rainbow Fairy was able to restore all the colors and turn everything back to normal. Kroodle has turned into a good wizard. However, it is revealed he has turned into a clumsy wizard by using his wand upside-down by mistake, turning let him look evil. 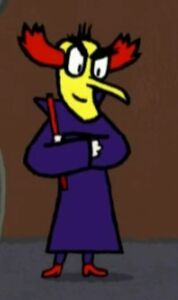 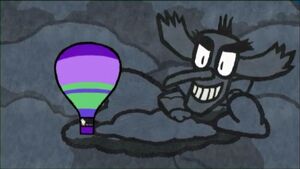 Kroodle in his cloud form. 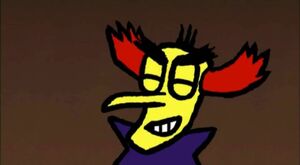 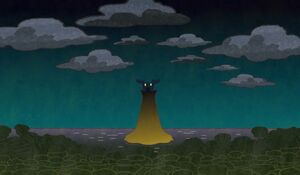