Get revenge on Scooby and Shaggy (failed).

The Amazing Krudsky, better known as Krudsky for short, is the main antagonist of the Scooby-Doo franchise's 19th feature film Scooby-Doo! and the Goblin King. He is a diabolical, manipulative, selfish, and evil magician who would do anything to get a quick buck and supreme power, no matter how vile a deed it was.

He was voiced by Wayne Knight, who also played Newman in Seinfeld, Al McWhiggin in Toy Story 2, Dennis Nedry in Jurassic Park, the The Penguin in Harley Quinn, and Emperor Zurg in the Toy Story franchise.

When Scooby-Doo and the gang arrived at the Halloween Carnival in Coolsville, Krudsky let them come and see his show, but wouldn't allow Scooby to do so, since Scooby had jumped into a pool of apples and splashed water onto him.

Later, Krudsky put on his magic show, but Shaggy and Scooby deliberately exposed him as a fraud. Krudsky was furious with the twosome, and the crowd booed him off the show despite his pleas. The magician glared at Shaggy and Scooby and yelled at them: "I'll get you for this...and your big dog too!".

Krudsky was upset that he had failed at his magic show. Searching for a way to get his fame back, Krudsky discovered in his spell book the Goblin Scepter, which belonged to the mighty Goblin King. That gave Krudsky a golden opportunity and he vowed that he's finally going up in the world. The mischievous Fairy Princess Willow fluttered in and played tricks on him. After he grabbed a flyswatter, Krudsky chased Willow, who slammed into a wall. Knocked unconscious, the fairy collapsed onto a table and Krudsky smashed his flyswatter down on her. After he recited a spell from his spell book, Krudsky stole her magic powers and turned himself into a sorcerer.

Later, Krudsky entered Mr. Gibbles' Magic Shop, and searched for Willow, who had escaped him. He found her hiding inside a clock and recaptured her, by trapping her in a glowing orb. The eccentric Mr. Gibbles tried to stop Krudsky, but the sorcerer turned him into a rabbit and took most of the magic items from the magic shop.

Inside his tent, Krudsky made a deal with the Goblin King that he would exchange Willow for the Goblin Scepter. Krudsky finally arrived at the Clock Tower and presented Willow to the Goblin King, who reluctantly accepted his offer. After he turned into a goblin, Krudsky betrayed the Goblin King and turned him into a goose. As the new Goblin King, Krudsky unleashed his new powers on the Mystery, Inc. gang, turned the Mystery Machine into a monster, and transformed Fred, Daphne, and Velma into a vampire, a witch, and a werewolf.

Luckily, Scooby-Doo and Shaggy arrived, stole the Goblin Scepter back, neutralized Krudsky's powers with it, and freed those who were transformed.

Before Krudsky could get even with the brave twosome, the Goblin King turned against him and trapped him in a glowing ball. The Goblin King, who turned out to be Princess Willow's father, reprimanded and punished her for her selfishness and reckless behavior before he told her that he's glad to have her back. Krudsky begged for forgiveness, but the Goblin King told him that he needed "time to work on his magic act." The Goblin King congratulated both Shaggy and Scooby for saving his kingdom and erased the memories of Fred, Daphne, and Velma to bring peace between both the mortal and the spirit world. Krudsky cried out: "I WANT MY MOMMY!" as the Goblin King took him into the Spirit World and imprisoned him for his treachery. 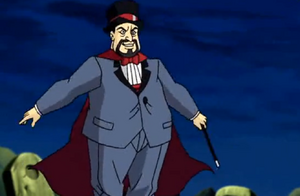 Krudsky performing at his magic show at the Halloween Carnival in Coolsville. 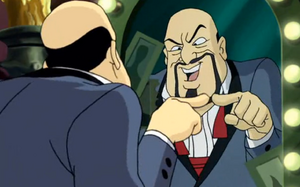 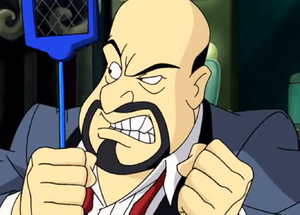 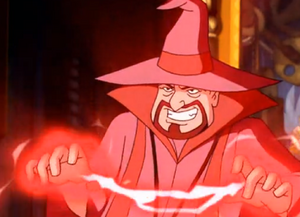 Krudsky casting a spell as a sorcerer. 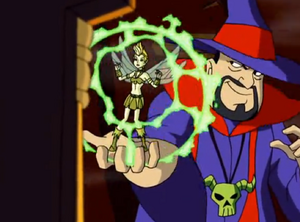 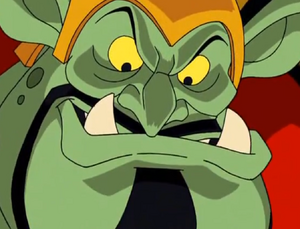 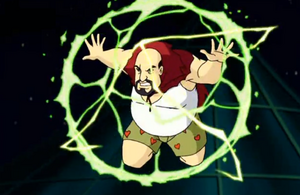 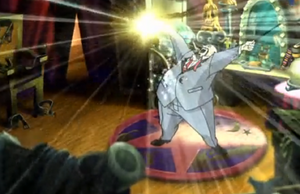 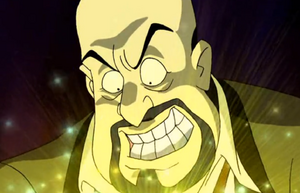 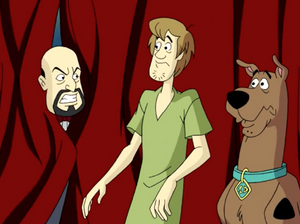 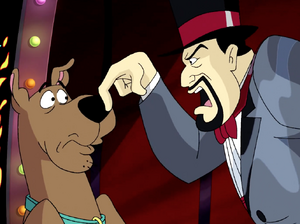 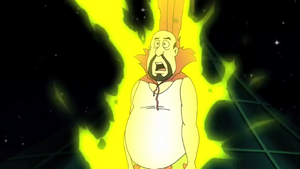 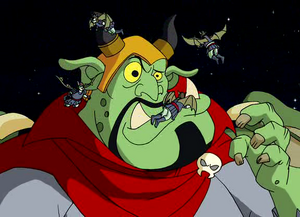 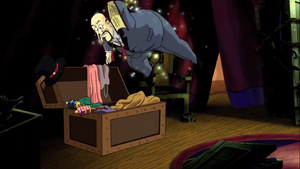