The Last House on the Left

Depending on each movies

Krug Stillo, commonly referred to simply as Krug, is the main antagonist in the 1972 horror film "The Last House On The Left" and the 2009 remake.

Krug is the leader of a gang of criminals and engages in a brutal murder and rape that horrifically backfires when he and his gang unwittingly take refuge for the night at a nearby home that is occupied by the parents of one of the girls they had attacked - who proceed to find their daughter and learn the truth at which point the killers become victims themselves of the merciless rage of the bereaved parents. Krug suffers a violent death, being chainsawed alive by Mari's enraged father John.

In the remake, Krug is broken out of custody by his brother Francis and girlfriend, Sadie. They come back to their hotel to find that Krugs son, Justin has brough Mari and Page over to smoke marijuana. This leads to a kidnapping that results in Page being murdered and Mari raped, Mari is shot trying to swim to safety. Krug and his family unknowingly take up refuge at Mari's parents, Emma and John Collingwood's beach house. When Mari is found by her parents and they realise the people who did this are in their house, it results in Francis and Sadie being killed and Krug knocked out. John later returns and paralyzes Krug from the neck down before putting his head in a microwave and turning it on, causing Krug's head to violently explode. 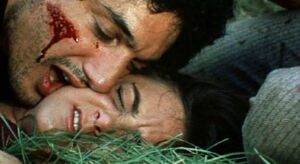 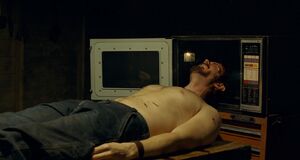 Krug moments before his head explodes in a microwave oven
Add a photo to this gallery
Retrieved from "https://villains.fandom.com/wiki/Krug_Stillo?oldid=3854778"
Community content is available under CC-BY-SA unless otherwise noted.