Defeat Luigi in order to prevent him from getting the elevator button (failed).

Cowardly Ghost
Officer Kruller is an enemy ghost encountered in Luigi's Mansion 3. He is an obese police officer who resides in the Hotel Shops located on the third floor of the Last Resort. His battle is in his office. Luigi fights him for the second floor's elevator button.

In order to defeat him, Gooigi must vacuum Officer Kruller's sunglasses. However, when Gooigi tries to vacuum them from Officer Kruller when very close to him, Officer Kruller will be able to use his belly in the right moment to attack Gooigi. If Gooigi receives enough damage, he will be undone and Luigi will have to create him again to battle Officer Kruller. If Luigi fails to capture Officer Kruller, sometimes the next time he appears he will be comically portraying a pair of groucho glasses, although he can use another pair of his original sunglasses later on. After being defeated, Kruller struggles to not get vacuumed to no avail. After defeating Officer Kruller in two-player mode, Luigi, who was watching the battle from outside, takes all the credit saying that he did it, after which Gooigi humorously copies Luigi as he had actually defeated Officer Kruller.

At the end of the game, it is revealed that most ghosts in the hotel were brainwashed by King Boo, and thus were unwillling accomplices. Thus, this might also be true for Officer Kruller. However, his eventual fate remains unknown.

While not a talkative type, Officer Kruller is clearly a coward, fleeing upon seeing Luigi and locking himself in the Security Office. He's also not a very good security guard, completely ignoring Luigi's ransacking - and likely looting - of the stores he's supposed to be watching. 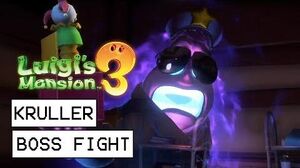 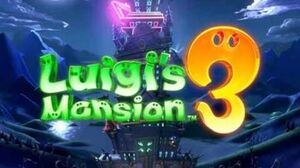 Retrieved from "https://villains.fandom.com/wiki/Kruller?oldid=4001460"
Community content is available under CC-BY-SA unless otherwise noted.