Krystalinda is a witch with the power of cryomancy and a minor antagonist in Dragon Quest XI.

Krystalinda is an ice witch, sealed away in an ancient book in the Royal Library long times ago.

Jasper in order to dispatch Hendrik, went to the library and unsealed Krystalinda, Jasper than told her to kill a man with a necklace similar to his, who is none other than Hendrik. Krystalinda than flied to the nearby Sniflhiem and froze the entire kingdom, as for the ruler of Sniflhiem, Queen Frysabel, Krystalinda sealed her away in the very same book that she was sealed into. She also takes in the form of Frysabel and told the Luminary that Jormun, a holy beast that kept Krystalinda's power sealed away is evil and told the Luminary to kill it. The Luminary fell for it and found out Hendrik is too fighting the holy beast, as he is too tricked.

After killing Jormun, Krystalinda appears and freeze them, but Veronica steps in and cast Frizze to wounds Krystalinda is neck, causing her to retreat. When they went back to Sniflhiem, they find out 'Frysabel' has bandage on her neck, thus explosing her ture Identity.

After the fall of Yggdrasil,  Gyldygga cursed Sniflhiem with Gold Fever and Frysabel sent Krystalinda to investigate it. However, even the ancient ice witch is unable to find out the reason behind the curse. Since the citizens of Sniflhiem believe that Krystalinda is to blame. Frysabel has no choice but to put Krystalinda in prison. In the end, Gyldygga is defeated and Krystalinda is released.

She is a sadistic ice witch that enjoy to torture her victims. However, after redeeming, Krystalinda becomes a trustworthy and reliable assistant of Queen Frysabel. 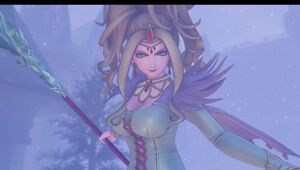 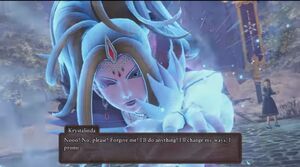 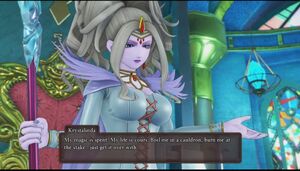 Krystalinda's redemption.
Add a photo to this gallery

Retrieved from "https://villains.fandom.com/wiki/Krystalinda?oldid=3688889"
Community content is available under CC-BY-SA unless otherwise noted.