The Ku Klux Klan (AKA "KKK") is a recurring villainous organization from the Comedy Central animated series, Brickleberry. They are a racist organization of white nationalists who kill all non-white people, non-Christian religious believers, and LGBT people. Such characters from the show such as Bobby Possumcods and BoDean Lynn are proud members of the group.

In "Welcome to Brickleberry", Malloy gave Denzel a little surprise by organizing a bunch of KKK members to show up in his cabin to throw him a little "party".

In "Race Off!", Denzel, (now a white man) was sick of Steve (now a black man), having a great time as a black man and wanted to expose him to some of the racism is people go through. So he talked to Bobby and BoDean and some unnamed third hillbilly into pretending to be KKK members so they could give Steve a little scare. They did just that one night but then they accidentally walked into a real Klan rally in the middle of the forest. The leader of the Klan came up and was glad to see them with the black civil rights leader, Steve Williams and they got ready to hang him. Steve apologized for in insensitive ways before he died and said that now he truly understands the black struggle. Denzel revealed his true self to Steve and explained the whole thing to him. When the leader of the KKK heard that Denzel was actually black and they just listened to him and respected him, he was swayed and learned that the way he was treating black people was wrong, only to reveal he was only joking and then had Denzel hanged too. Luckily for Steve and Denzel, Woody happened to be flying overhead in an airplane and accidentally pressed the fuel dump button, pouring a bunch of gasoline on them. The flames of the burning cross caught fire on the gasoline and lit all the KKK members on fire, burning them to death and setting Steve and Denzel free, albeit without their skin.

In "Little Boy Malloy", Ethel went on a series of bad dates. One of her dates was with a Klansman, in costume. Despite being anti-Semitic, the Klansman ordered Kosher food.

In "Scared Straight", Bobby was revealed to be a member of the KKK, when he put on a white hood and said he was going to a "ghost convention". 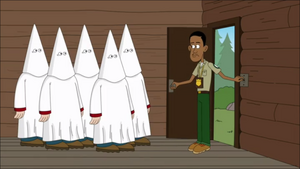 The KKK gives Denzel a surprise visit for his birthday. 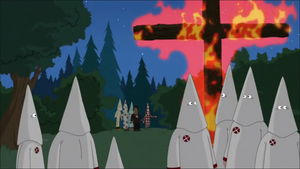 The Ku Klux Klan at a cross-burning gathering. 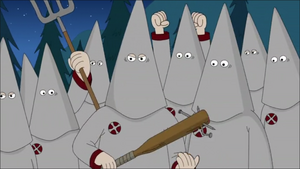 The Ku Klux Klan hankering for the murder of a black guy. 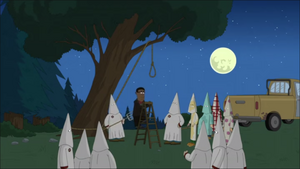 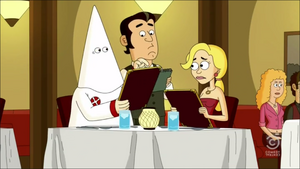 Ethel on a date with a Klansman. 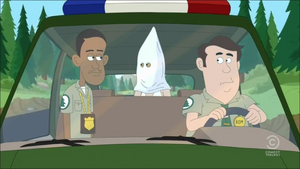 Bobby is a member of the KKK, himself.