The Ku Klux Klan, often abbreviated as the KKK, are a militant group found in the Red Dead Redemption universe, available as encounters during free roam in Red Dead Redemption II, where the player can hunt down, capture or kill various members of the infamous organization.

Despite being based on a dangerous terrorist group in real life, Red Dead Redemption portrays them as a bunch of incompetent idiots, as during their gatherings and initiatons they will set themselves ablaze while setting a cross on fire. Foundable parchment and letters that can be looted from their corpses ultimately reveals them as a group of dimwitted bigots with supremacist views, and in aforementioned encounters they will usually kill themselves unless the player does so for them.

The Ku Klux Klan can be encountered in various locations across the map, where they are engaging in various gatherings. While they will not attack the player on sight they can still be attacked by players, either directly or via ambushing. One notable encounter finds the player stumbling upon an initiation ritual where the Klan are welcoming a new member, complete with cross burning and promises of purifying the land. If the player does nothing, said new member ends up lighting himself on fire, and then sets another member on fire after attempting to help him. All of the others then flee in the havoc, abandoning the leader (dressed in black and red robes), who scolds the player for standing by and watching "a good man" die. The player then has the option to kill the leader or leave them be.

Another encounter is where the player coming across two Klansmen who are struggling to lift a wooden cross, while their leader mockingly encourages them and demands they do not drop it, shortly afterwards, the two members collapse and the cross crushes them both to death. The leader then sullenly asks to be left alone, although if the player antagonises or attacks them, they will become hostile and attack with a knife.

A third encounter can be found in which a small number of Klansmen are arguing with each other at a failed rally, one complaining about the low attendance and thus angers the others, resulting in a violent in-fighting. 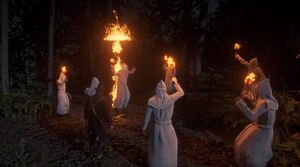 The Klan burning a cross. 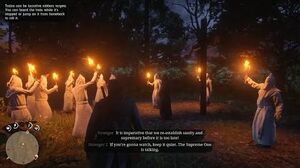 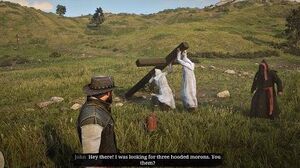