Get the Anansi Totem and kill Mari (failed).

Follow Mallus and in return save her village in Zambesi.

She is the sister of Mari McCabe and the granddaughter of Amaya Jiwe who also searched for the mystical Anansi Totem and later the Water Totem. Following her death by Benatu Eshu, she was later revived as a follower of the time demon Mallus before reforming.

She is was voiced by Anika Noni Rose in Vixen, then portrayed by Tracy Ifeachor in DC's Legends of Tomorrow.

Kuasa was born in the Zambesi Village, located in the M'Changa Province of Zambesi; when she was four years old, she was named the guardian of the Anansi Totem. However, after a local warlord named Benatu Eshu attacked the village in his hunt for the totems of power, her mother fled with her baby sister and the totem, leaving Kuasa bitter and obsessed with retrieving it. Feeling the pressure to protect Zambesi as a duty to honor the dead, as she grew up Kuasa became a criminal forming alliance with dangerous people and obtaining power, men and resources in order to find her sister and the totem

After Kuasa threatened Mari McCabe to hand the Anansi Totem over. Mari agreed and only kept it for sentimental reasons. Mari told Kuasa she just wants to know where it came from. When Mari tried to remove the necklace, Kuasa said she'd just have to remove the necklace from her corpse but Mari quickly tapped into the totem to camouflage and get away.

Mari awoke next to telling the latter she actually intended to hand over the necklace. Mari told Kuasa they need to figure a way to remove the necklace from her neck, without removing her neck as she found Kuasa's methods unnecessary. Kuasa revealed to herself to Mari as her older sister and welcomed Mari home. Kuasa revealed she had brought her to Zambesi Village, their home. Mari was outraged but Kuasa told her she gave her everything she wanted. Kuasa told Mari that their people asked the god Anansi to protect their village. Kuasa told Mari in exchange for worship, Anansi gave them a totem to channel his power. Kuasa tells her she was supposed to be the totem's guardian, up until a local war lord attacked the village and their mother ran off with Mari and the totem. Kuasa told that there may be only death left in their village, it was still her home and obligation to protect it.

Kuasa learned she came after the real reason why the totem began to activate. Mari ran off but was quickly stopped. Kuasa set off Anansi to bite Mari, though the totem activated and gave Mari the power of a rhino. Mari knocked Kuasa's guards away and ran off, though she passed out later. Kuasa eventually caught up and took the necklace from Mari. When Kuasa tapped into the totem, Mari charged with the animals, who Kuasa fought with before being grazed in an arm by Mari. Kuasa activated the spirit of the tiger as she claimed a mere stick couldn't harm her. Kuasa attacked Mari and bit her in the shoulder, before being bitten by the same spider she had previously used on Mari.

Kuasa brought the totem back to the village. She held it up as a group of men worshiped her. Kuasa was then confronted by Mari, who told her that older sibling always steal from their younger siblings and that she was the "history of mental illness in the family". Kuasa told Mari that the totem was rightfully hers, though Kuasa was told their mother wanted to make sure it stayed away from her. Kuasa and Mari engaged in battle where Kuasa was grazed in an arm with a spear thrown by Mari before being bit by Anansi. Kuasa, growing weak from Anansi's poison, told Mari it wasn't over before the latter knocked her out with a punishing uppercut and took the totem. Sometime later Mari returned to Africa alongside Professor Macalester to find out more about Eshu and how to stop him. Kuasa, who had been hospitalized by the poison Mari used to stop her, revealed that to counteract Eshu's Fire Totem, they had to retrieve the Water Totem. Kuasa told them she knew of its whereabouts, and would lead them to it with the provision that she could join them in the fight against Eshu.

With the assistance of Felicity Smoak, Mari and Kuasa managed to break into the mansion in which the Totem was located in Star City. However, once they retrieved it, Kuasa attempted to steal the Totem for herself and tried to escape, only to stopped by The Atom and Black Canary. Mari then convinced Kuasa to join them all in their fight to stop Eshu from destroying Detroit, and to avenge their village of Zambesi, to which she agreed. She fought alongside Mari, Ray and Laurel, but they were clearly outmatched. Kuasa refused to run from Eshu, saying she wasn't her mother. She was quickly overpowered by Eshu, being incinerated by Eshu's fire, along with the Water Totem.

Sometime after her demise, Kuasa was resurrected by a woman, who identified herself as a servant of Mallus, who required her services.

Kuasa was sent to operate in Seattle 2042, to apprehend a hacktivist named Zari Tomaz, to acquire an air totem, with her powers intact despite her former death. At first, she ambushed an A.R.G.U.S.vehicle which carried Zari and killed two A.R.G.U.S. soldiers only to find out she escaped. She tracked down Zari to her hiding place at her warehouse where she saw the Legends were also looking for her and tailed them until they led her to Zari in a bar. In an ensuing fight, Kuasa defeated Sara Lance until a diversion allowed the Legends to escape. Eventually, Kuasa found the Atom and Zari and quickly beat him and nearly killed him by drowning him until Zari stepped in. Kuasa offered Zari revenge on A.R.G.U.S. in return for the totem she had as she couldn't wield it. When the proposal was refused, Kuasa was preparing to kill them until she was ambushed by the Legends.

Amaya Jiwe stepped forward to challenge her and she quickly tried to strike at her with water but Amaya blocked it with her power. Recognizing the power of the Anansi Totem, Kuasa was temporarily left in shock which Amaya had the chance to throw her with the strength of an elephant. Realizing that Amaya was her grandmother, she told her that she would only be killing herself if she killed Amaya, hinting at their relationship. She then teleported herself away using an unknown mystical object. Later, she accompanies Damien and Nora Darhk. She fights against Amaya and escapes after saying her that she is her grandmother. 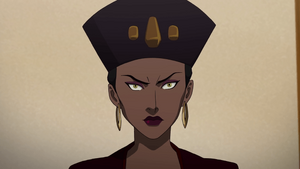 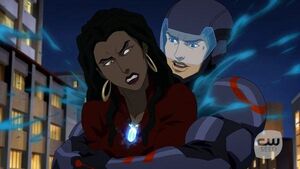 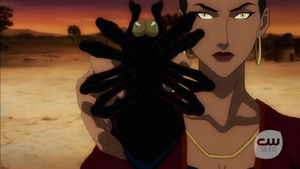 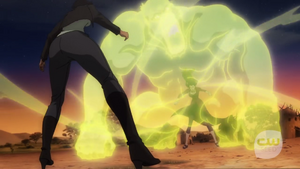 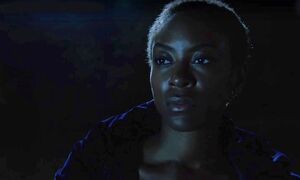 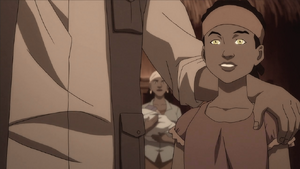 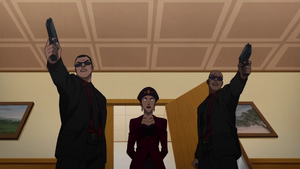 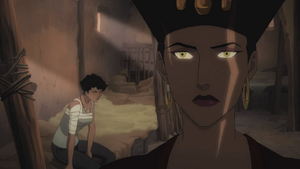 Kuasa reveals their connection to Mari. 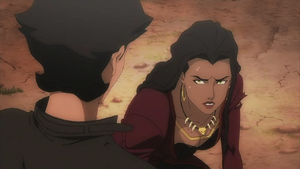 Kuasa's connection with the Anansi Totem is severed. 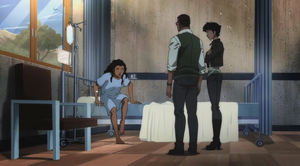 Kuasa, stripped of her powers and weakened by Anansi's poison, is visited by Mari and Professor Macalester. 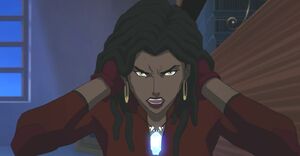 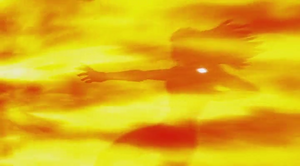 Kuasa is killed by Eshu. 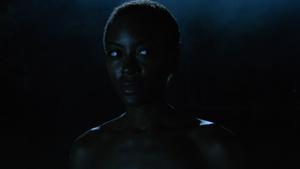 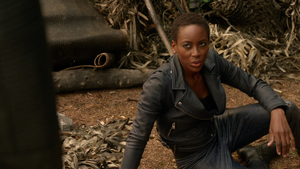 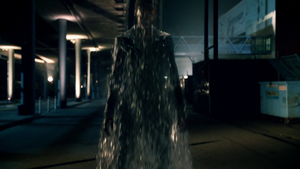