Intimidation
The ability to smell money

Taxing the citizens of January Junction

Keep all the loot all to himself.

Force Elisa to marry him.
Destroy January Junction (all failed).

Greedy Monarch
Kubla Kraus is the main antagonist in Rankin Bass' 1979 Christmas special Jack Frost. He is known as the Cossack King, though his cossacks abandoned him long ago, forcing him to build a mechanical army in their place. He appears to be deeply lonely, going so far as to carry on a dilusional friendship with a puppet who he names Dommy. Kubla's main motives for villainous behavior appear to be greed, poor social skills, and extreme isolation.

He was voiced by the late Rankin/Bass veteran actor Paul Frees, who also played Uriah Caw in Cricket on the Hearth, Burgermeister Meisterburger and Grimsley in Santa Claus is Comin' to Town, Jack Frost in Frosty's Winter Wonderland and Rudolph and Frosty's Christmas in July, Aeon the Terrible and Winterbolt in the Rudolph specials, Quizler in Mouse on the Mayflower, and Boris Badenov in the Rocky and Bullwinkle series.

Kubla is one of the story's main driving forces throughout the story. He negligently causes the disaster which introduces Jack Frost to his love interest Elisa.

Upon seeing Elisa himself, Kubla too falls in love with her, and vows to win her heart by way of kidnapping her. Kubla tries to convince her that he is the right man for her to marry by having Dommy describe how handsome he is, and then repeating the same lines that he said as Dommy when prompted to speak for himself. Jack Frost has already become human in order to earn Elisa's love, and he attempts to rescue Elisa from Kubla with the aid of a knight whom Elisa has fallen in love with. Jack is imprisoned by Kubla, and pleads with Father Winter to retain his magical form so that he can freeze Kubla's castle, and prevent his mechanical army of Ka-knights from invading and destroying the town where Elisa lives, in retribution for the rescue. At the end of winter, Jack again pleads with Father Winter, this time to become human again so that he can defeat Kubla once and for all.

Jack knocks Kubla out with a ceiling cave in, and uses Dommy to command the Ka-knight army to march down a path that sends them all to their doom. Kubla comes to, and asks Dommy who he likes better between him and Jack Frost. Dommy of course choses Kubla (as Kubla was controlling him at the time), and Kubla charges at Jack, attempting to push him through the window, but Jack dodges, and Kubla, along with Dommy, crash through the window, plummeting to their immenent demise, as Father Winter sends a gust of cold wind after them. Because Jack has been delayed all winter, fighting against Kubla Kraus, he spends virtually no time with Elisa, and she marries the knight who otherwise played a very minor role in the piece. Heartbroken, Jack is unable to complete the tasks he needed to achieve to allow him to retain his humanity, so he returns to being the magical spirit of winter.

Kubla is a selfish and tyrannical despot who takes advantage of his citizens and does not care about the consequences of his actions. He annexes even the most modest forms of currency from the peasantry of January Junction in the name of taxation. Because of this, he is very wealthy, but has no real friends. He carries on pseudo-relationships with the machines that he builds, treating them like living people and animals. He suffers from terrible people skills and archaically sexist notions about male/female relationships. He appears to be afflicted with depression, narcissism, and potentially mild schizophrenia, or a schizophrenic-spectrum disorder. 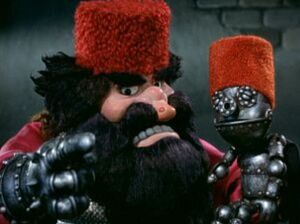 Retrieved from "https://villains.fandom.com/wiki/Kubla_Kraus?oldid=4308778"
Community content is available under CC-BY-SA unless otherwise noted.