Kill as much as she can (ongoing).

The Slit-Mouthed Woman (Japanese:口裂け女, Kuchisake-Onna), is a demonic spirit from a Japanese urban legend of the same name. She is recognizable by her horrendous slit mouth and her character is presumed to be based from older Japanese mythological beings.

Long ago, during the feudal period of Japan, a young and beautiful woman lived happily with her husband, who is a samurai. However, she was very vain and one day, she secretly cheated on her husband after meeting a younger and attractive man. Enraged, the samurai raised his sword and mutilated her mouth ear to ear and asked her "Who will think you're beautiful now?".

After the incident, the woman died either from her injuries or committed suicide after the humiliating experience and she later became a restless spirit, doomed to roam on Earth for eternity. As a vengeful spirit, she hid behind the bushes and stalked students who walked home from school during the late afternoon.

While a naive student hears a rustling sound within the bushes, the woman will appear in front of him/her and ask him/her if she is beautiful or not. If the student replied no, she immediately killed him/her with her large pair of scissors but if the student replied yes, she took off the surgical mask that she often wore as a spirit and revealed her horrendous slit mouth.

The Kuchisake-onna was once a human mother stuck with a horrible cold, so she constantly wore a surgical mask. However, her sickness was so stressful that she took her stress out on her 3 children, constantly abusing them to make it go away. Eventually, 2 of her children died from their injuries, and there was only one child left. The mother then gave her last child a large kitchen knife and asked her to stab her neck because she didn't want to kill him due to his injuries; she told him "If you don't kill me, you might end up like the others" (the "others" are the 2 children that died from their injuries).

He refused to kill her so the mother got enraged from the fact that he refused to kill her. She yelled "You'll end up like them!", and took a large pair of scissors, going to stab him to death. But with the kitchen knife in his hand, the boy quickly slit her mouth from ear to ear before the scissors could stab him. She died from bleeding to death, as a high amount of blood was lost. Very quickly, her son decided to hide her body in the living room closet. The mother then lived on as a vengeful spirit: the Kuchisake-onna, who kidnaps children (at least 3 a day), tying them up in her basement and killing them off there or slitting their mouths from ear to ear.

Many years after her death when she awakens, she spawns an earthquake after her legend is brought up. After a young boy goes missing, her legend starts to spread more and more, which even prompts the school administrators to advise teachers taking the children home by walking with them. A teacher named Kyoko walks home certain students, including a young girl named Mika. After an argument, Kuchisake-Onna attacks and kidnaps Mika, but not before revealing her face, which is slit, causing Mika to scream.

It's later revealed Kuchisake-Onna is possessing women in order to get around the town, after Kyoko and another teacher Noboru, stop and kill her, but then she turns into a housewife, her spirit then possesses another woman and kidnapping her daughter, taking her back to her basement, where she would abuse and then kill some of them, though sparing Mika. Noboru later reveals that the slit mouthed woman is none other than his own mother's possessed ghost, who killed her 30 years ago out of mercy. He, Kyoko and Mika's mother go to save Mika and potentially stop Kuchisake-Onna once and for all. Noboru attempts to kill her by stabbing her in the neck, since that's where she wanted Noboru to originally kill her. He does so, but is also killed in the attack, as Kyoko and Mika escape. This, however is implied failed to stop Kuchisake-Onna, as she later possesses Kyoko, though it could be within a dream like sequence.

Kuchisake-Onna takes the form as an evil alter-ego to a school girl named Mayumi Sawada, and then later fully on possessing her. Before this, Mayumi lived on a farm with her parents, who ran a successful farming business. She was friends her crush named Seiji Moriyama, who gives Mayumi his jacket as a memento. However on one fateful night, Mayumi is attacked by her sister's, Sachiko, ex-boyfriend, who is in a jealous rage over Sachiko marrying another man, although he mistakenly attacks Mayumi instead of Sachiko, who is in Tokyo. Not finished however, the ex-boyfriend proceeds to murder Mayumi's mother, before finally being shot by the father. Mayumi survives the attack, but was attacked with sulfuric acid, disfiguring her face.

After the attack, Mayumi starts to exhibit traits of psychosis and insanity. With her fellow students spreading rumors and referring to her as mutant girl, she covers her face with a cloth mask. She starts to hallucinate, seeing a woman in a red coat, at first frightening her. This worsens when her father kills himself, to save the debts by his life insurance. Seiji starts to see a new girl, which leads to him no longer communicating to her. Later in the movie, Mayumi's two close friends were murdered by a woman in a red coat. Shortly after their funerals, Seiji meets Mayumi for one last time, telling her the truth about seeing someone else. Shortly after, the same woman in red, kills Seiji by stabbing him to death. Mayumi then washes off her bloody clothing, revealing that she was indeed responsible for killing her friends and Seiji, with the woman in red being her alter-ego, presumably when she's enraged.

Eventually, her sisters, Yukie and Sachiko find out about Mayumi murdering her friends, they plan on killing her, possibly to hide her connection with the killings so the farm doesn't lose anymore reputation. Mayumi finds out about this and plans on killing them. However, her sisters poison Mayumi's drink, making her cough up blood and eventually killing her. The sisters bury Mayumi, hoping to end the nightmare. However, Mayumi comes back from the dead, murdering her two sisters, asking one of them, "Am I pretty," before she finally dies. The movie then ends with a boy staring at her in fear, and then she approaches him. It's revealed she killed 13 people in total, and injured 53, never to be heard from again. 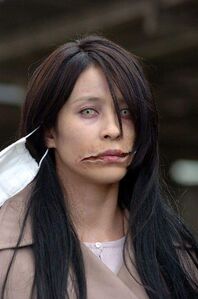 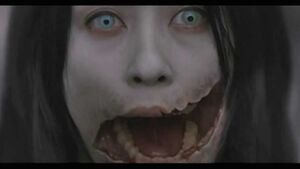 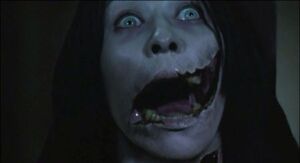 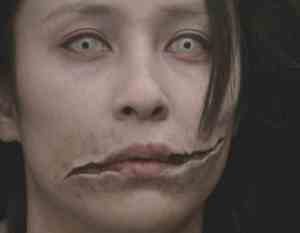