Conquer the multiverse for Tojitendo.

Robotic Thugs
Kudakk are the soldiers of the Kikaitopia Dynasty Tojitendo and antagonists in Kikai Sentai Zenkaiger.

Per the order of Great King Boccowaus, a force of Kudakk led by Barashitara invaded the world Kaito Goshikida lived in, which had mysteriously fused with a portion of Kikaitopia that had escaped the Tojitendo's domain. During their attack however, the Kudakk were met by Kaito and Juran, who transformed into Zenkaizer and ZenkaiJuran to fight them off. The two Zenkaigers battled against the Kudakk and were able to destroy them, along with the Kudaiter commanding them, staving off Tojitendo's invasion for the time being.

The main weapon of the Kudakk is the "Plug Lancer", a staff which can fire electric bolts or be used for melee combat. 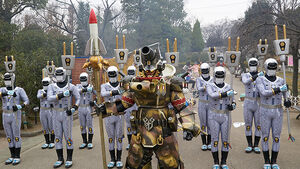