Supplier for the Villain Factory

Spreading Trigger through her bees.

Turn people with Quirks into mutants via Trigger.

Kuin Hachisuka is the secondary antagonist of My Hero Academia Vigilantes. She is an agent of the Villain Factory, who uses her Quirk, Queen Bee, to inject the drug Trigger to turn citizens into Instant Villains in order to wreak havoc on the city. Because of the Instant Villain attacks instigated by her Trigger deliveries, the Naruhata Vigilantes were formed to combat this new threat.

Kuin is first seen possessing Tamao Oguro, Knuckleduster's daughter, appearing to be normal except for her medical eyepatch and the constant sinister grin on her face. In this form, she was peppy and cheerful but described as being strange by her friends. However, this is a facade to hide her true psychotic and sadistic nature, enjoying toying with her victims' feelings and not caring if she kills many people at once through her schemes.

In truth, Kuin Hachisuka is a swarm of bees linked by a hive mind, controlled by a queen bee. The swarm resides in the eye socket of their host. The bees are able to carry Trigger, a drug that enhances Quirks, which she uses to spread Trigger across the town.

Little is known about Kuin Hachisuka's past, but she began to work for the Villain Factory at some point, distributing Trigger across the streets, obtaining information about the transformed victims and kidnapping potential candidates to transform into Next-Level Villains. She survived by possessing hosts and killing entire households to sustain the swarm.

Kuin is first seen by Koichi Haimawari and Kazuho Haneyama as a regular teenage girl, taking pictures with her friends. She runs off claiming that she has to go to work. When she is in private, she releases Trigger-carrying bees all over the city, injecting it into people with Quirks to turn them into mutated and destructive monsters. As the vigilantes combat the Instant Villains, she meets up with a boy named Teruo Unagisawa to recruit him but then she starts bleeding from the eye as a result of Knuckleduster crushing one of the bees. Kuin and Teruo head to the Villain Factory's headquarters, where he is transformed into an Instant Villain. 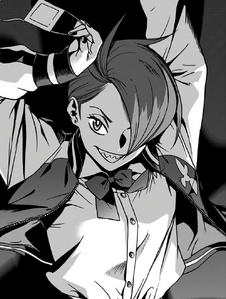 Retrieved from "https://villains.fandom.com/wiki/Kuin_Hachisuka?oldid=3873323"
Community content is available under CC-BY-SA unless otherwise noted.