Bringing death to all.

Overthrow his creator Garland and rule both worlds of Terra and Gaia (succeeded).

Defeat Zidane and his friends.
Destroy the crystal to end all of existence (all failed).

Kuja is the main antagonist of Final Fantasy IX. He is a mysterious man who is revealed to be a Genome, one of the humanoid beings manufactured to provoke war between humans. He operates behind the scenes, at first working in Queen Brahne's shadow. He wishes to acquire the power of summoned monsters called the Eidolons to overthrow his creator, Garland, and rule both Terra and Gaia forever.

He has no voice actor in his original game, but in other Final Fantasy-related media such as the Dissidia games, he is voiced by JD Cullum.

He was created on the planet Terra by the villainous Garland. Garland sought to destroy Gaia in order to save Terra, so he sent Kuja there to disrupt the cycle of souls. Kuja acted as an angel of death by encouraging warfare amongst the inhabitants of Gaia. This act claimed thousands of innocent lives, disrupting the cycle of souls like Garland wanted. However, Kuja desperately wanted to prove his individuality and superiority over other inhabitants of Terra. While on Gaia, he attempted to find a great power to destroy his creator, Garland, with.

Kuja was a mysterious figure for much of the game and was manipulating Queen Brahne into waging war on neighboring kingdoms, plunging a once peaceful world into ever-increasing conflict: a conflict that escalated after Queen Brahne managed to get her hands on eidolons that could destroy entire kingdoms, thus fuelling her quest for power even further.

Kuja has long silver hair that falls halfway down his back. In his hair, he wears a large feather of the same color. He has light blue eyes and is of medium height, light build, with a pale complexion. He wears white sleeves with a purple mantle around his shoulders. Kuja wears a white robe on the back of his legs that extends to his ankles. The robe is held up by four straps that act as a codpiece. His pants are a deeper purple than his shoulder-guards and his shoes are black with golden buckles. Kuja has a tail, but conceals it.

Kuja's speech patterns are metaphorical and jovial; for example he refers to Garnet as a "canary", and Brahne as "the elephant-lady". His refined nature juxtaposes his role as a sadistic war-bringer. Kuja has a love of luxury, as evidenced by his home at Desert Palace.

Kuja is conceited and narcissistic in contrast to Zidane's humility. Kuja has an ego to match his power and he lets his pride rule his head. While he had his chance to kill Zidane when he was still a baby, Kuja chose to let him live to prove himself superior to him. After discovering his destiny as a mortal, Kuja's cultured personality turns into insanity, believing life should not be allowed to continue without him.

Kuja uses his elegance to hide his insecurities and deep down he is conflicted by his existence, having been created as a tool for Garland. Kuja scorns the black mages, but also finds himself identifying with them. As explained in Final Fantasy IX Ultimania Kuja never experienced childhood and thus his emotional growth is stunted, being unable to empathize with others or feel remorse for his actions. It appears that learning of his fate as a mortal and rebelling against this destiny allows Kuja to grow, and comes to see at least some of the repercussions of his actions.

In the Japanese versions of Final Fantasy IX and Dissidia, Kuja refers to himself with the boyish pronoun boku and addresses others with the familiar/informal kimi.

Kuja is shown to be an exceptional mage. He can create Black Mages from mist using machinery and magic, and even with no outside help can summon Mistodons. He is capable of controlling monsters as well, and is shown to control an army of Silver Dragons led by the Nova Dragon, as well as the monster Deathguise that attacks Zidane's party in the Crystal World. Kuja is also largely immune to injury - even the Dragon King Bahamut's attack only barely succeeds in drawing blood from him. It is also shown that even when not in Trance, Kuja is capable of casting the extremely powerful Flare Star. This makes him one of the most powerful, if not the most powerful, Black Magic practitioners in Final Fantasy IX, even before he gained the ultimate power of Trance.

After entering Trance, Kuja's power increases exponentially. He knows the strongest spells of the game, including Curaga, Meteor, Holy, and Flare, and his strongest spell, Flare Star, is potentially lethal to the entire party. He is able to completely destroy Terra with Ultima, and even defeats the party with it twice. When Kuja casts Ultima against the party, no damage is displayed as being taken, but the battle instantly ends, so it is physically impossible to survive the spell.

Kuja is fought as a boss in Pandemonium and in Trance form in Memoria. Both times, he casts Ultima upon his defeat, so although the party technically wins the battle, for storyline purposes, Kuja prevails. 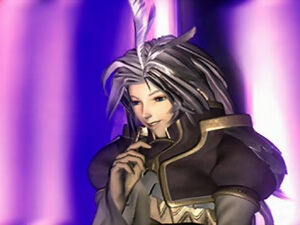