Villains Wiki
Register
Don't have an account?
Sign In
Advertisement
in: Categories Needed, One Piece Villains, Manga Villains,
and 14 more

Kumadori is a former member of CP9 and one of the last agents to be introduced.

He is voiced by Hiroaki Yoshida in the Japanese version of the anime, and by Andrew Love in the English version who also voiced Akainu in the same series, Raoh in Legends of the Dark King, and Uragami in Parasyte.

He is recognizable by his large frame, huge mane of pinkish hair, and a right eye that rarely seems to be open. His body positions (especially his penchant for holding one hand out in front of him) are also reminiscent of mie poses, and his vocal inflection is similar to that of kabuki actors. Also, in one of the covers of CP9's Incident Report, Kumadori is shown to have four scars: two large ones on his torso and a pair of smaller ones on his left arm. Like other CP9 agents, he wears a black suit, black pants, black shoes and a black shirt, but Kumadori wore a green tie. He also wore things covering the back of his hand tied around his palm.

He seems to honor the samurai code of honor very heavily as he comically attempts to take his own life after dishonoring himself. As he accepts the blame for nearly anything, even the faults of others, this happens quite often in his appearances. Before he commits seppuku, however, he instinctively uses tekkai, unintentionally saving his own life in a rather comical way. He thinks "real men" shouldn't cry or give up, which is why he kept fighting, even when confronted against Chopper's monster form. Kumadori also tried to keep Chopper from crying and from giving up because of his ideals.

Kumadori resembles a character in kabuki (traditional Japanese theatre). He is a very loud character, and often punctuates his sentences with a loud, dramatic "YOYOI!!" He has a strange way of speaking, talks rather slowly and tends to repeat or draw out syllables and words in the manner of kabuki actors. He also has a penchant for spouting haikus, even during battles and at other inappropriate times. He often makes references to his "mother in heaven", Kumadori Yamanbako, then begins to sob, even while fighting. Before killing his opponents he often asks them to visit his mother in afterlife and tell her that he is okay. He claims her "divine protection" is the reason for his failure at committing seppuku. However, according to Oda in SBS Volume 44, his mother is still alive.

Kumadori claims to be a sennin (仙人, a type of hermit in Japanese folklore who can control even their body's autonomic functions, as well as live forever), which explains his ability to suddenly gain or lose weight by controlling the digestion and absorption of food, and the ability to control his hair.

His fighting abilities seem to revolve around controlling his hair, using it to grab his enemies and attack them. He often combines his techniques with a shakujo or a Khakkhara that he occasionally uses in battle for even more destructive power. Overall he is the most eccentric character in CP9.

Kumadori has mastered all six techniques of Rokushiki, and he usually combines it with his staff and Life Return to increase versatility, having a Doriki of 810.

As a hermit, Kumadori can use Life Return to control his bodily functions to his desire, such as manipulating his hair or allowing himself to digest food in an instant and losing all the excess weight at once.

Kumadori wields a staff which he uses in conjunction with his Rokushiki.

Before the battle with the Straw Hats

Kumadori is shown upsidedown on a couch explaining to his boss Spandam with Jabra and Fukuro about how the mission they were on to only kill three people ended up having to kill over twenty due to Fukuro talking about it in the town. Kumadori states he will take responsibility by committing Sepuku and only uses Tekkai when he stabs himself, causing him to get depressed on how he cannot die, prompting Jabra to yell at him to just die. Kumadori and the others greet Lucci and the others after not meeting them in over five years. When Kalifa makes fun of Spandam and keeps stating whatever he does is sexual harassment, Kumadori states how rude she is and decides to commit Sepuku to atone for this and still uses Tekkai causing him to get depressed again. Jabra just states he should die already and Kumadori wonders if it is his mother that is keeping him alive, prompting Jabra to tear up by this and Kumadori asks him is he now understands and Jabra states he does of having the feeling of someone you love taken from you. They both cry and hug each other to a comedic affect over their losses (Kumadori to his mother and Jabra to Gatherine who dumped him) prompting Spandam to be annoyed by their acts. When Spandam calls out to Kumadori to save him from Franky biting on his head, Kumadori does his dance first and saves him (though he ends up causing more injuries to him than Franky did) and Kumadori states there's no need to thank him. He then witnesses Kaku and Kalifa eat the Devil Fruits that Spandam gave them. After Blueno is defeated, Kumadori and the other agents arrive atop of the building and prepare to fight the Straw Hats.

Later, Kumadori meets Nami and tries to fight her. He almost kills her but she escapes due to her jacket coming loose. She tries to ask for where his key is, but his long speech causes her to run away from getting killed.

Kumadori was originally fighting with Nami, who was at a severe disadvantage against his powers.

However, Chopper appeared and helped Nami (after Nami had already stolen Kumadori's key) to escape, becoming Kumadori's opponent. Chopper managed to trap Kumadori in the refrigerator, but had to consume a Rumble Ball to do so. When Kumadori broke out and resumed the battle, Chopper concluded that he would need his Arm Point or Horn Point to break Kumadori's tekkai, but due to having consumed a Rumble Ball before, had difficulty accessing the proper forms, leading Chopper to take a heavy beating in the meantime.

Even when Chopper did get the desired form and managed his strongest attack, the damage Kumadori inflicted was enough to cause Chopper to pass out and be defenseless against the battered but not disabled Kumadori.

After taking heavy injuries from Chopper, Kumadori went on a brutal frenzy, attacking Chopper for damaging him so much. On the verge of defeat, Chopper consumed a third Rumble Ball, and his subsequent "Monster Point" form severely injured Kumadori. Kumadori fought his best against the monster but was no match and was easily defeated by him. Chopper then threw him all the way back to the courthouse, bloodied and defeated.

He and the other agents were rescued by Blueno's Air Door. Most of them were able to get back up after their fights against the Straw Hats despite their injuries, except for Rob Lucci. He then carries an unconscious Lucci along the Sea Train tracks with the others. Having arrived at St. Poplar with the others, he begins to perform in the street for medical fees as they are no longer connected to the government since Spandam blamed them for the failed mission at Enies Lobby. After paying for Lucci's medical fees, they use the rest to buy clothes and other essentials. Kumadori is seen feeding Hattori as Kalifa reads a book.

Later, Lucci is discharged from the hospital to general celebration. He seemed to enjoy himself as he and the other members of CP9 went bowling, particularly when Kalifa used her explosive strength to smash the bowling ball through the wall (let alone the pins). However, the Candy Pirates appeared and began ransacking St. Poplar. Thus Kumadori, along with the rest of CP9, stopped their bowling match to save the kidnapped citizens by beating up the offending pirates. But Lucci goes too far and kills the captain, which shocks the onlookers, and CP9 realize they cannot stay in the city anymore. However, a little girl gives Kalifa a flower to thank her for saving the town, with Kumadori, Fukuro, and Jabra frightened. Taking this gift and commandeering the Candy Pirates' ship, they sailed back to their homeland.

Upon arrival, they watched the next generation of CP9 agents being trained. As they were watching, they found out the pursuers that Spandam sent had caught up with them. In order to protect their homeland from these people, the agents dealt with them. They are then seen standing on Very Good's ship after dealing with the pursuers. After Lucci gave their former leader a message that they would come back for him someday, the agents commandeered their pursuer's ship and sailed off from their homeland. However, the now planted flower the grateful girl gave them is seen behind the silhouette of their ship in the distance on their homeland. 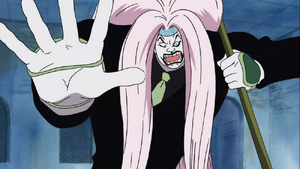 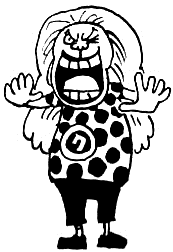 Kumadori as a child. 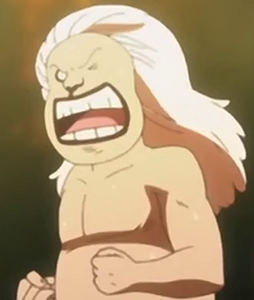 Kumadori during his early training. 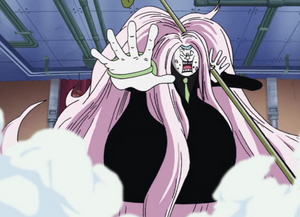 Kumadori's body after eating a vast amount of food. 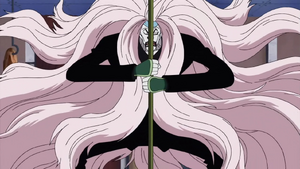 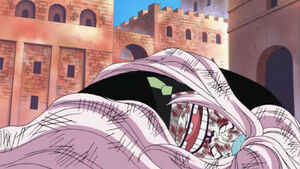 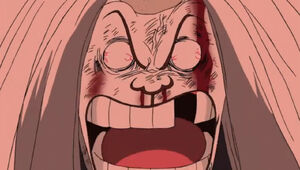 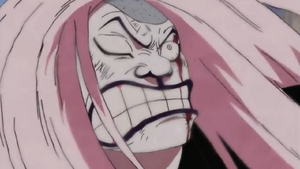 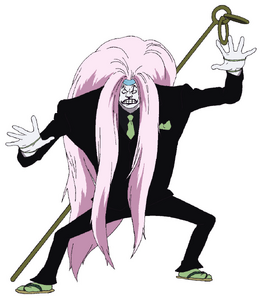 Kumadori's concept art from the anime. 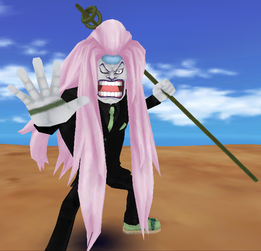 Kumadori in One Py Berry Match. 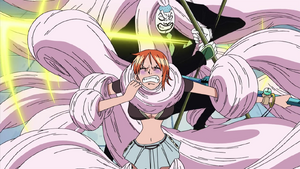 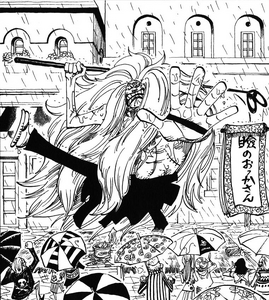 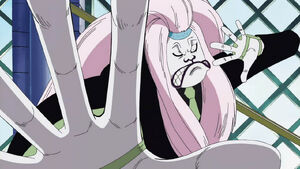 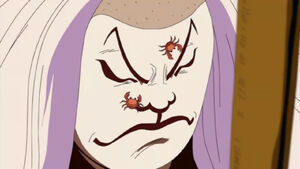 Kumadori crabs in his faces.