Destroy the G-Guard Base (Godzilla Island).
Kill Godzilla and Gigan (all failed).

Kumasogami (in Japanese: クマソガミ) is a major antagonist in the 1994 Japanese film Yamato Takeru, and later appeared under the alias Dororin in the television series Godzilla Island.

He was suit portrayed by "Hurricane" Ryū Hariken, who also portrayed Guilala, King Ghidorah, and Battra.

Kumasogami is a large three-eyed humanoid comprising of rock and magma cracks. He is able to morph his body into anything he desires, such as turning his arms into a sword or bow.

As Dororin, his appearance is that of a small, glowing blue orb. After absorbing dirt from Matango Island, his appearance looks identical to Kumasogami only with browner skin.

Kumasogami was a deity worshiped by the barbaric kingdom of Kumaso, sealed away within a volcano. Once in a while, the monster would emerge from the volcano and was offered a young maiden as a sacrifice to please his wrath.

When Prince Ousu and his followers were imprisoned by warlord Kumaso Takeru, Oto was chosen to be the next sacrifice for their god. Refusing to turn her over, Ousu intercepted the ritual at the temple, defeating Kumaso and his minions. Ousu rescues Oto from the alter, only for Kumasogami to emerge and attack. At first, the battle against the Lava God seemed to be futile, as Kumasogami easily broke through his containment gate and killed most of Ousu's men by morphing his arms into a bow and sword. When Kumasogami was about to finish off Oto, Ousu's sacred jewel, the Yasakani no Magatama, gave Ousu the ability to shoot lasers from his eyes, allowing him to destroy Kumasogami.

Under the name Dororin, Kumasogami is the main antagonist of Story 16. He was given to Landes by the Giant Dark Emperor after her failure to capture Gigan. Dororin landed on Mantango Island and absorbed surrounding dirt to construct a body. In the form of Godzilla, Dororin smashed a rock over Gigan's head, then flew to Godzilla Island and struck Godzilla in the head in the form of Gigan. This resulted in Godzilla and Gigan clashing in a battle with one another.

With the two Kaiju distracted, Dororin attacks the G-Guard Base. The G-Guard Commander sends out Mechagodzilla to battle Dororin. Meanwhile, Nao used Moguera to stop Godzilla and Gigan from fighting and revealed Dororin as their provoker. Godzilla, Gigan, and Mechagodzilla clashed against Dororin, but his ability to quickly regenerate his wounds gave him the advantage. During the fight, Misato realizes that since the evil Kaiju was made of dirt, he would turn to mud if exposed to water. Misato then pilots Fire Fighter Jet Jaguar to spray water at Dororin, causing the dirt to become mud and melt off his body, exposing his orb core. Dororin immediately attempts to fly away only for Gigan to catch up and smash the core with his claw. 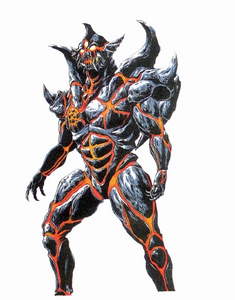 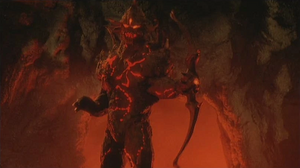 Kumasogami with his arm in the form of a bow. 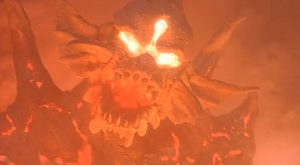 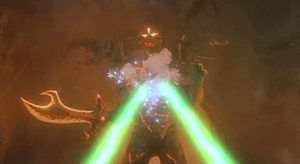 Kumasogami about to be struct by Ousu's eye lasers, leading to his death.