Multiply up to five clones

Aid Zhuqiaomon with his goals (failed).

Kumbhiramon is an Exalted Beast Digimon whose name is derived from the mythological Kumbhīra. It is the "Rat" Deva, and serves the Sovereign Ebonwumon. As a follower of Ebonwumon, who boasts of its great wisdom, it is a sage who plays the part of the "challenger" in Ebonwumon's Zen Kōans. It is mostly able to predict the mindset of anyone but Ebonwumon, and has a habit of bewildering the opponent by announcing their next move. Though it uses sarcasm with an acrimonious tone, it charmingly ends all of its sentences with "~chū". As it's not very strong, it's not suited for flinging itself at the opponent, but by means of its powerful abilities of telekinesis it freely operates a giant steel pestle as big as its own body, the "Treasure Pestle".

Kumbhiramon is an Ultimate Level Digimon that resembles a white rat. He has light brown wings, wears golden armor and also wields a green Bǎo Chǔ.

Kumbhiramon appeared in Digimon Tamers, in which he serves Zhuqiaomon like the other Devas. He is the seventh Deva to appear and the seventh to be destroyed.

Kumbhiramon Bio-emerged in a sewage system. Jeri and Calumon encountered him and, after asking if he was her partner (to which he replied "I am a mighty Deva who serves the all powerful Sovereign Digimon. Why would I join forces with a pathetic human?"), were chased by him until Leomon bio-emerged in the Real World and fought him.

Kumbhiramon later returned and cloned himself. Leomon had help from Gargomon to defeat him and Leomon killed him by slashing him with his sword.

Kumbhiramon can multiply himself up to five clones of himself.

This Ultimate-leveled Digimon resembles a rat and is just one of the twelve "Deva Digimon". He fights for and follows the Four Holy Beasts member, Ebonwumon, and is the most resourceful out of the other three followers: so resourceful, in fact, that due to his proud and extensive knowledge, he is Ebonwumon's ally. He has the ability to read almost any mind of anyone he comes across, an ability shared by Ebonwumon, and while sometimes he can instantly guess what's on his opponent's mind, sometimes Kumbhiramon has trouble guessing. He uses caustic wording, which is calling the kettle black because he tends to end almost every sentence with the phrase "Chu!", giving the Deva an uncharacteristically comedic effect. He has a weak body, but carries a steel mallet, which he can wield freely through his strong psychic powers: this is translated as his "Treasure Pestle" attack. His special attack is "Krimisha", which duplicates himself six times, surrounds the enemy with an impenetrable field decorated with six heavenly bodies, then beats the enemy to deletion with his "Treasure Pestle". (Yes, the same Treasure Pestle that can be found on Sinduramon.) 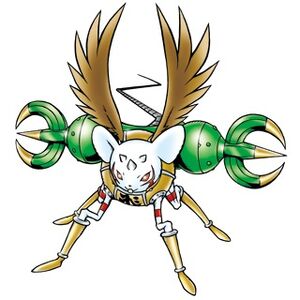