Kumonga is a giant spider kaiju from the Godzilla series who serves as the main antagonist of the film Son of Godzilla and a minor antagonist in Godzilla: Final Wars. However, Kumonga appears as an ally of Godzilla in Destroy All Monsters.

Kumonga was awakened by Minilla and Godzilla's fight with a Kamacuras. He climbed out of his den and attacked Goro and Saeko, but they escaped. Kumonga then traps the humans in the cave and waits to ambush them outside.

Kumonga later encountered Godzilla's son Minilla and trapped him, as well as a Kamacuras, in webbing. As he fed on the Kamacuras, Godzilla arrived and fought the giant spider to save his son. However, Kumonga was able to overpower Godzilla and would've killed him if not for Minilla intervening. Together, Minilla and Godzilla use their atomic breaths set Kumonga ablaze, though he lived afterwards.

Kumonga was taken to Monsterland, where he lived with several other monsters. In 1999, aliens known as the Kilaaks brainwashed Kumonga and the other monsters into attacking major cities around the world in an attempt to take over the Earth. However, the humans were able to break the mind-control. In response, the Kilaaks released King Ghidorah to fight the monsters. As the monsters battled Ghidorah, Kumonga was able to trap the alien dragon in his and Mothra's webbing. After Ghidorah was killed, the monsters were able to live on Monsterland in peace.

Kumonga was brain-washed, along with many other monsters, by the aliens known as the Xiliens. The Xiliens released the monsters over the world. Kumonga was shown destroying a trailer with his sharp arms in Phoenix, Arizona. The Xiliens transported the monsters away and told the humans that they eradicated the monsters to save the world. When the humans found out their plan, the Xiliens released the monsters around the world again. However, Godzilla arrived to fight them. Kumonga confronted Godzilla in New Guinea and attempted to trap him in webbing, but Godzilla grabbed the string of webbing and spun Kumonga around like a ball and chain and threw it, sending the spider flying away in the sky. Kumonga's fate is left uncertain, but very likely died.

Kumonga in Son of Godzilla. 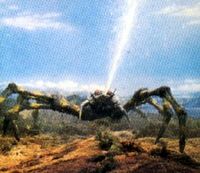 Kumonga in Destroy All Monsters. 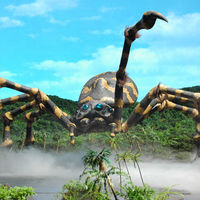 Kumonga in Godzilla: Rulers of Earth.

Kumonga in Godzilla: The Half-Century War. 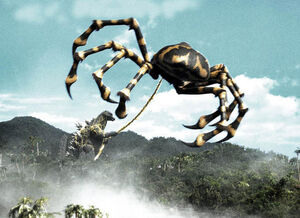 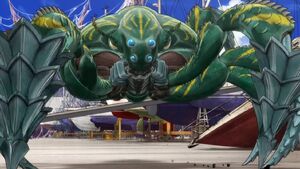