The Kuniang Martial Arts Team (姑娘武術組 in Chinese) is a recurring team of enemies in the Strider series. In Japanese they were originally called the Three Chinese Girls (中国３人娘 in Chinese) in the first game, and later known as the Tong Pooh Three Sisters (東風三姉妹 in Chinese). Out of its three members, Ton Pooh is the most representative of the group, having the most on-screen time in games and guest appearances in other media crossovers.

In the 2014 Strider the team is called The Four Winds, now including their mistress named Xi Wang Mu as the fourth member. The sisters often call themselves simply 'The Winds' in-game.

The Kuniang M.A. Team is a trio of Chinese sisters that offer their services as bounty hunters and assassins. Their strength lies in their hand-to-hand mastery and teamwork, employing perfectly synchronized and graceful movements in their deadly art styles. Their mastery of Chinese martial arts is beyond that of most ordinary people, with their kicks being strong enough to generate a Plasma Whirlwind, a plasma-like arc of energy not dissimilar from the one made by Hiryu's Cypher. The whirlwind is as strong as Hiryu's weapon, being able of cutting through anything and bifurcating ordinary humans.

The sisters were originally identical and all used the same attack, the "Back Spin Kick". They were given signature attacks in Strider 2 where each used the plasma generated by their kicks differently, and later given weapons of choice in the 2014 remake to further separate their fighting styles.

Tong Pooh is the middle sister and the team's leader, recognized by her green uniform and twin braided hairstyle. She's the most talented and powerful member of the trio, and fights out of deep loyalty to Grandmaster Meio and his cause.

Pei Pooh is the oldest of the three sisters, and is recognized by her red clothes and long hair styled in a long ponytail. Pei Pooh's signature technique is a series of rapid-fire kicks trailed by a blade of red plasma. Her selected weapon in the 2014 Strider are a set of Chinese hookswords known as Yingyang Jizhaorui or "Chicken Claw Piercers" with built-in machine guns which lets her shoot powerful fireballs.

Pei Pooh is carefree and reckless when alone, where she gets usually carried away by her bloodlust and desire for battle. Although she's a constant headache to her sisters due to her impulsive nature, Pei Pooh adopts the most serious attitude when fighting as a trinity.

Sai Pooh is the youngest sister of the trinity who is recognized by her blue clothes (purple in the first game) and twin pigtails hairstyle. Her signature attack is a descending flying kick engulfed in plasma energy. She is absent in the 2014 Strider, replaced by Nang Pooh.

Sai Pooh appears to be the most childish among the sisters, but very little is actually known about her personality.

The "Black Tong Pooh" is a version of the Kuniang boss faced as an optional battle in the first game's final stage. This Chinese trio appears wearing black pants and gray shirts instead of the colored uniforms of the main team, and are faced in a small room where gravity is reversed, making for a much harder battle for Hiryu.

The origins or nature of this second team is unknown, as no official information is known to exist about them. They are also referred to as the "Mourning Dress version".

An enemy exclusive of the crossover game Namco x Capcom, inspired by the "Black Tong Pooh" enemy. The Nang Pooh soldiers are an army of clones of Tong Pooh who serve her directly. The Nang Pooh clones wear black pants and gray shirts in contrast to the original's green attire, and are fully loyal to Tong Pooh. They don't speak at all during the game, due to their status as generic enemies.

The Nang Pooh soldiers possess the same skills and abilities as Tong Pooh, and are able to create deadly blades of plasma just like her.

Nang Pooh was introduced in the 2014 Strider as the third, youngest sister of the team. She inherited most of the design elements from the original Sai Pooh, and the replacement is believed to have been done in order to retain the four cardinals theme naming, as she and the new character Xi Wang Mu both have "west" in their name and were thus redundant.

Introduced in the 2014 Strider, Xi Wang Mu is the master of the Winds and an excelling martial arts master herself, having trascended the mortal concept of martial arts in her quest to perfectly master them. Her past enshrouded in mystery, Xi Wang Mu now serves Grandmaster Meio as one of his most trusted lieutenants. She trained the Winds into mastering aspects of her fighting style, and as such she can mimic her techniques and abilities perfectly. Xi Wang Mu wields special knuckle guards that let her create "weapon simulations", allowing her to use any weapon in existence.

The Kuniang M.A. Team was contracted by Grandmaster Meio to eliminate Strider Hiryu after his victory over the General Mikiel and the council at Kazakh, having placed an immense bounty for his head. Hiryu encounters them as he hacks his way through a Siberian plateau, finally engaging the trio while aboard the Sky Thunder Mk-II, an airship he commandeered in-flight. After defeating them all he confronts Tong Pooh, demanding to be taken to their boss, but Tong Pooh instead calls him a fool and reveals to him the existence of the Flying Battleship Balrog, which Hiryu dismisses as a big toy.

The Kuniang M.A. Team returns as a trinity of sisters who work as deadly martial arts assassins, while maintaining a cover job for the public as entertainers in the "Míng Liàng Acrobatics Troupe" (明亮雑技団 in Chinese), where they perform as acrobats and contortionists.

Under orders from Meio's followers, The Kuniang M.A. Team takes part in the terrorist attack on Neo Hong Kong City spearheaded by the Chinese Mafia. The sisters jump into Hiryu's path on the high society residential area, assaulting him on a speedway crowded by flying cars. Jumping from car to car, Hiryu faces the three acrobatic assassins and defeats them. Following Hiryu's destruction of Mafia's Emperor Dragon, a defeated Tong Pooh taunts him defiantly with his 'foolishness' in believing he can take on her Lord, and that the whole world (and Hiryu himself) belongs to him. Hiryu coolly retorts that she's the only one that will always be Meio's servants (pet dog in the Japanese version), and leaves her behind.

In this version the sisters are called The Four Winds. They are a team of freelance bounty hunters with a worldwide reputation. Trained by the mysterious expert martial artist Xi Wang Mu, the three sisters are themselves expert martial arts masters in their own rights, each specializing in different individual styles as well as powerful combination attacks between all three. The sister trinity as well as their mistress work as subordinates of Grandmaster Meio and are specifically tasked with assassination missions. While the three sisters are well-known across the world, no one has seen the team's fourth member (revealed to be Xi Wang Mu), and there are only unconfirmed rumors about the existence of "a martial artists from the same school" in Kazakh City.

Before Hiryu's infiltration in Kazakh City, the Winds confronted and slew the twin Striders Kuga and Raiga, having overcome their combined attacks with those of their own. After Hiryu infiltrated the city, the sisters individually confront him at three different points. Pei Pooh first seeks him out on the lower levels of the Transit Station, unsuccesfully trying to kill him alone. Nang Pooh takes over during Hiryu's pass through the Residential District, where she taunts him over speakers before stopping his advanced near the area's exit. Even though an injured Pei Pooh joins her, the two sisters are still no match for Hiryu and retreat.

Finally, Tong Pooh joins her two sisters in a final assault inside the Indusry area. Tong Pooh comments on Hiryu's ability against her sisters and goes first as they watch, but soon enough the other two sisters intervene after realizing Tong too would be defeated should the duel drag out. Although making use of all their techniques and combined strategies, the three are defeated by Hiryu in the end.

After Hiryu trounces General Mikiel in the Military area, Grandmaster Meio personally commands Xi Wang Mu to stop him. She catches him up as he travels the Research Facility and fights not only due to Grandmaster Meio's orders but also to avenge her students. Despite her immense strength and esoteric techniques, she is unable to stop Hiryu. The team's final fate is left unknown.

Ton Pooh in-game appears in the fighting game as one of several "Special Partners", characters which can be called forth during battle to deliver a quick attack and then leave. She attacks with her Plasma Whirlwind kick.

Ton Pooh appears as a minor enemy alongside Solo, another fellow bounty hunter working for Meio, and Strider Hien. Ton uses the Back Kick and Somersault Kick as her attacks. She serves Grandmaster Meio and protects the Third Moon. She commands the Nang Pooh soldiers, gray-clothed clones of herself. Since they are merely mindless mooks, they have no dialogue at all.

While the other two sisters are not present in the game proper, according to a Japanese site there are remnants in the code that implies they were planned to appear at some point, but were ultimately dropped.

Ton Pooh appears in two of the three card-themed crossover games. In the second game (Card Fighters 2), she and her sisters appear in the art for a Reaction Card (a type of counter card) named "3 Sisters" (3しまい in Japanese). In the third game (Card Fighters DS), she's an actual character card alongside Hiryu. She's a card of "C" Rarity (common) with no special ability. Interestingly, her card profile states she is the daughter of Meio, but considering the game has a very poor translation, it is likely just an error.

Tong Pooh appears as one of the 500+ character cards found in this crossover mobile phone game.

The three sisters appear as a set of limited promotional cards in the PlayStation Vita port of this Dragon's Dogma spin-off game, in their 2014 artwork.

Tong Pooh reappears as a supporting antagonist in Project X Zone 2, working alongside other villains with a single goal in mind: the resurrection of Grandmaster Meio (who is obviously dead at this point). Pei Pooh and Sai Pooh also make a cameo appearance, assisting their sister. 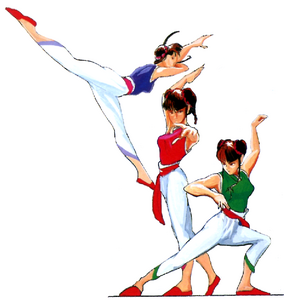 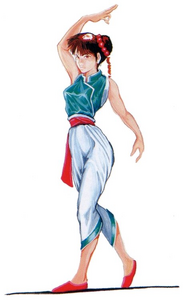 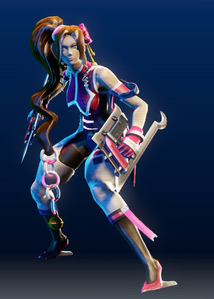 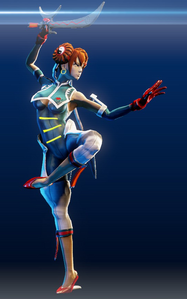 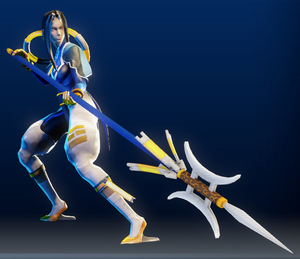 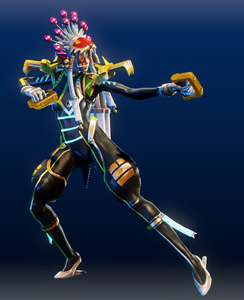 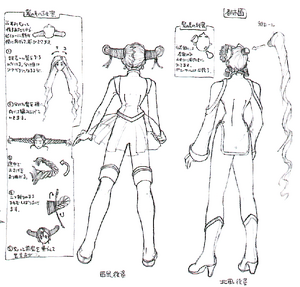