Assist Gamou in completing the Day of Awakening and contacting the Presenters (supposed).

Assist Fourze and Meteor in combating the Zodiarts (actual).

Kuniteru Emoto, also known as the Virgo Zodiarts (also known by his alias Tachibana), is a major-antagonist-turned-supporting-protaginist in Kamen Rider Fourze. The right-hand of Mitsuaki Gamou, Emoto is also secretly one of the Horoscopes, the benefactor of Kamen Rider Meteor and is covertly assisting the Kamen Riders in fighting the Zodiarts.

He was portrayed by Hajime Yamazaki. As the Virgo Zodiarts, he was voiced by Rie Tanaka.

Emoto was once a colleague of Rokuro Utahoshi and Mitsuaki Gamou, researching Cosmic Energy with them. However, after Gamou and Rokuro had a disagreement over how to reverse engineer the Core Switch, Gamou had Emoto steal the Zodiarts Switches from the OSTO space station.

Emoto later became a professor at the Kyoto Space University, where he studied the Hole's presence there. In addition to becoming the Virgo Zodiarts, Emoto also secretly assumed the identity of Tachibana and set up base in the M-BUS, where he trained Ryusei Sakuta to become Kamen Rider Meteor and fight the Zodiarts.

As Virgo, Emoto was responsible for banishing Gamou's other subordinates to the Dark Nebula if they failed him. After The Hole in Kyoto was negated, Emoto transfers to Miraikan where he becomes an instructor to Kengo, Yuki, and Tomoko. When Tomoko discovered he was the Virgo Zodarts, Emoto sent her to the Dark Nebula to keep his identity hidden.

The Virgo Zodiarts then attempts to intimidate the Kamen Rider Club into stopping their interference in the Horoscopes' plan. Kengo Utahoshi sent a Nugerover after the Virgo Zodiarts in an attempt to unearth the Horoscope's identity, but Virgo crushes it. However, Kengo keeps track of the Cosmic Energy readings of the destroyed Nugerover and detects them coming from Tachibana. Commenting that he is not surprised of such cleverness coming from the son of Rokuro Utahoshi, Tachibana reveals himself as the Virgo Zodiarts. Upon this revelation, Meteor fiercely attacks him, but Virgo banishes him to the Dark Nebula.

The Virgo Zodiarts then battled Fourze, all while encouraging him to fight with ruthlessness. However, after seeing Kamen Rider Club reform Emoto remembers his friendships with Rokuro and Gamou and realizes that ruthlessness was not what was needed. Emoto brings back Tomoko and Ryusei from the M-BUS, the true face of the Dark Nebula, and reveals his true intentions to the Kamen Rider Club. However, Gamo takes notice of this and transforms into the Sagittarius Zodiarts to attack him and the Riders. After being critically wounded by Sagittarius, Emoto teleported the Kamen Rider Club to safety and attempted to tell Kengo what really happened to his father, but he is interrupted by Libra and Leo. Emoto then tells Kengo the Horoscopes' goal before teleporting away to fight the Leo and Libra Zodiarts. As Emoto was killed by Leo's claws he died smiling, happy to have made friends once again.

The Kamen Rider Club later held a funeral for him on the moon. The set up a shrine outside the Rabbit Hatch in his memory that contained his cracked glasses, Tachibana's helmet, and a picture of him and Rokuro. 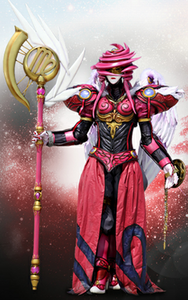 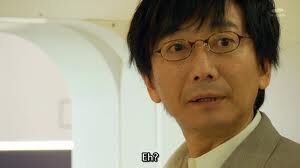 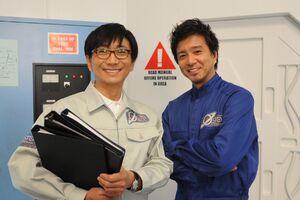 Emoto with Kengo's father in the past. 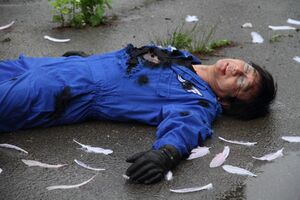 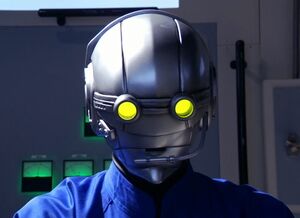 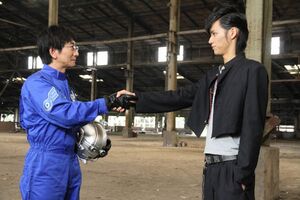 Emoto after being unmasked as Tachibana. 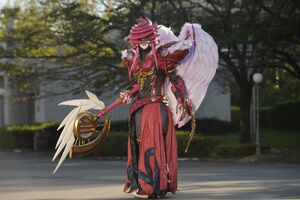 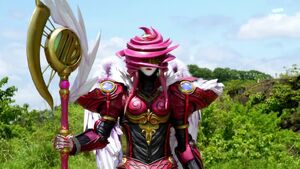 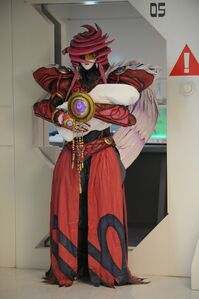 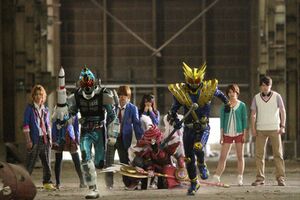 Virgo with the Kamen Rider Club. 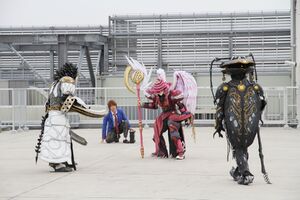 Virgo is chased down by Libra and Leo for his betrayal.