Kunks Butylmercaptan is a skunk-themed Gangler Monster and its the main antagonist in episode 30 of the 2018 TV series Kaitou Sentai Lupinranger VS Keisatsu Sentai Patranger. He is also equipped with a rose bouquet-like treasure called La Vie en rose.

He is voiced by Takeharu Ōnishi who previously voiced a Tireloid from 2012 TV series called Tokumei Sentai Go-Busters.

Kunks Butylmercaptan made his first appearance on the roof of a building where he used the treasure's ability to disguise the scent of explosive gas and once he was done he was about to head to the next location to apply the explosive scent, but he was stopped by the two cadets he'd then fired a disguised explosive at them, but they transformed during the explosion to battle him.

When the thieves arrived they battled cops and Kunks. However when Lupin Blue gained access to Kunks' safe (which his password is 9-3-1) and got La Vie en rose (which translate as "Life in Rose") Rose Bouquet his scent that's been disguised is revealed as his original scent and it reeks. Due to this accident he has the advantage in this fight and if anyone hits him he'll released even more of his stinky gas.

His scent was so strong that even the Ganglers that reside in the Back World can even smell it and to do this Goche Ru Medou has to enlarge him from her home dimension without smelling that awful scent.

Speaking of which the disguised scent is revealed to be flammable gas as it began to explode on every building that Kunks Butylmercaptan has placed however it was all put out thanks to this robot known as Lupin Kaiser Splash Magic. Once that was done Kunks then battled the robot and X Emperor Gunner. After that he was then destroyed by this finisher Good Striker: Big Poppin' Splash. 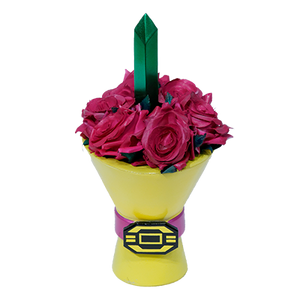