Member of the Four Kings of Heaven

Kunzite is the fourth and strongest of Queen Beryl's Four Kings of Heaven and an antagonist in Sailor Moon who represents the Middle East region.

Kunzite first appears following Nephrite's defeat, collaborating with Zoicite before he was defeated as well. Targeting Minako, who deceived all parties that she was Princess Serenity reincarnated, Kunzite called her out to Tokyo Tower while she attempted to reach his true self. But Kunzite ends up defeating the Sailor Guardians and killed Tuxedo Mask when he got in the path of an attack meant for Sailor Moon, revealing them to be Prince Endymion and the real Serenity. Kunzite spirits Mamoru away, starting to regain some of his past life memories when Beryl used her magic to fortify the enslavement spell that she cast him and the other Kings of Heaven. While killed off by the Sailor Guardians in the original manga, Kunzite and the others kings later fend off the Sailor Guardians from entering the Dark Kingdom's stronghold. Kunzite is revealed to Sailor Venus's lover in their past life as she freed him from Beryl's spell, though he and the other Kings were vaporized by Queen Metalia for no longer being of use to her. But the four stones that the Four Kings of Heaven were reduced to end up in Mamoru's possession with the quartet's spirits now able to resume their duty as his protectors and advisers, Kunzite revealing Metalia's weakness.

Malachite first appeared in Episode 18. He was later seen occasionally, but actually attacked the Sailor Scouts in Episode 29, trapping them inside a black dome and weakening them in an attempt to force Tuxedo Mask to hand over his crystals, but Sailor Venus arrived and shot Malachiet's hands with a Venus Crescent Beam smash, destroying the forcefield.

In Episode 30, Malachite appeared as part of Zoycite's double-cross, when he challenged Tuxedo Mask to a battle over the crystals, he appeared and took them. In Episode 31, he became horrified after He witnessed Queen Beryl kill Zoycite, unsuccessfully trying to convince her to spare her. However, the only one that he seemed to feel animosity toward over Zoisite's death was Sailor Moon, and he attacked the Sailor Scouts later on, but Sailor Moon fought him off using Cosmic Moon Power.

As it was Sailor Moon/Usagi Tsukino who possessed the Legendary Silver Crystal, Kunzite's plans revolved around trying to find and destroy Sailor Moon and take the crystal from her. However, he often got into arguments with Prince Endymion (Mamoru Chiba), whom Beryl had turned evil (though he still fought off Kunzite's Youma at times). Like Zoisite, Kunzite would turn people into Youmas, except they can disguise themselves as their human forms at any time.

In Episode 39, Malachite attacked the Sailor Scouts in a cave, but they were sent back in time to view the battle at the Moon Kingdom. During this scene he was seen in a flashback, standing alongside Jedite (Jadeite), Neflite (Nephrite), and Zoycite. In the present, Malachite attacked Luna and Artemis in a snowy area, and nearly killed them. The Sailor Scouts fought Malachite, but he had the advantage, as he gets stronger whenever they see him, and threw powerful energy blades at him. But Sailor Moon gained the upper hand using Cosmic Moon Power. Malachite threw an energy blade at her, but she reflected it back at him with her crescent moon wand, mortally wounding him. Before dying, Malachite said he would be coming to join Zoycite soon, and dissolved into nothingness.

The final battle with Malachite, up to the point in which the deathblow was struck and he said "I'm losing strength" was shown when the Sailor Scouts recalled past battles in the final episode of Sailor Moon R. 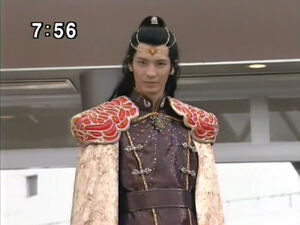 The late Akira Kubodera as Kunzite.

Kunzite as he appeared in the first anime.