Brainwash the entire world on a global scale in order to rule the world with Project Gekkako.

Defeat the Tsukikage Members who are a threat to her.
(all failed)

Kurara Tendō (in Japanese, 天堂久良羅, Tendō Kurara), also known as Clara Tendo (in the English version) and Sparrow Woman is the main antagonist of the 2018 original anime series Release the Spyce.

Kurara is a high-ranking member of Moryo and stands out as the one who carries out the interest of the organization as a whole in Far East branch. She plans to use the organization's influence to lead humanity to a new order where she and the others will control a brainwashed humankind to create a new era. Controlling criminal organizations from the underworld, Kurara staged many terrorist attacks and criminal activities, including murders, drug trafficking and prostitution.

She was voiced by Shizuka Ito in the Japanese version, whom also voiced Benitsubasa and Ellen Mira Mathers, and Joanne Bonasso in the English version.

Also known as the Sparrow Woman, she is currently serving as the head of the evil Moryo organization. She gives her mercenaries jelly drinks to energize them, as well as wipe their memories when they fail their missions. Aiming to take control of the world using her special drug of brainwash, Kurara worked with other leaders of Moryo organization and staged terrorist attacks across Japan to complete her secret project.

Kurara Tendo in her first appearances is seen as a faceless woman with a sultry black and red kimono and a sparrow that accompanies her. However, in Episode 6, she was seen as a beautiful blonde woman with purple eyes and a long hair that almost looks like Princess of Japan while also has a rose as a compliment. In addition, she also wears some black boots. During her disguise as the CEO of Kyuten Science, Fumiko Torimaru, in Episode 10, she wears a glasses.

Tendo is described as a rather enigmatic figure of Moryo. A serious no-nonsense leader, Tendo has no hesitation to eliminate her own henchman or her collaborators if they failed her or defying her orders or using them as a test subjects to stop the Tsukikage once and for all for infiltrating her plans. This was shown when she mutated her own muscle woman, Dolte, as a zombie with her drug or experimenting her own subordinates by giving them a rather painful drugs for brainwashing.

Prior to events of Release the Spyce, two years ago Moryo had been planning on hijacking satellites around the world by dropping them on key cities of each nation. As the Tsukikage members Yuki Hanzomon and Nagaho Fujibayashi tried to disrupt their plan led by Alexei the Crimson Storm, he tried to stop them but they were able to defeat him. Kurara Tendo appears with backup to fight the Tsukikage. When Nagaho was fatally slashed by Tendo's katana, she decided to blow herself up with a explosive gadget to save Yuki as the facility was destroyed causing Moryo's plan to be foiled.

After her plans failed two years earlier, Tendo created the Kyuten Science Facility as a front on her schemes on Sorasaki City by ranging to drug trades to testing chemical weapons that could brainwash the humans as the Tsukikage been trying to foiled them. On every move along with the newcomer Momo Minamoto as the Tsukikage been a thorn on their side she hired mercenaries such as Theresia Rey Dolte and Byakko to stop the Tsukikage. Despite Dolte's brute strength, she couldn't matched by Momo and Yuki in the battle even Byakko was defeated by a teamwork by Momo and Fuu causing Byakko's memories to been erased and been fired by the Togen in order to prevent their ties been soured. As the Tsukikage been going on Okinawa to stop the Terrorist Group Nirai Kanai from creating a Chemical Weapon been based of the flowers when a member of Shisa Ouka Miyaume got forced to work with them but she decided to aid the Tsukikage on stopping the Nirai Kanai from distributing the flower to Moryo as the Tsukikage able to defeat the Chief or Nirai Kanai.

As the Tsukikage had captured Kurara Tendo and been decided to Interrogated her but suddenly their base of operations the Wasabi Resturant got attacked by Moryo after their operation as the Tsukikage got cornered on the Harbor by Moryo's Robots and the Tsukikage had to Fight Tendo head on as things gone ugly Mei Yachiyo a Tsukikage Member betrayed them as she attacks Aoba causing her been badly wounded and been fall on the water as she threw an Explosive Gadget on the Water that make sure she is dead while Goemon got Knocked out cold by Mei using a Taser when Momo was badly beaten by Tendo while Yuki was killed by Moryo's Robots as Tendo wanted them captured for their experiments as Mei got rewarded by Tendo a liquid Jelly.

As Moryo been thinking they were winning Tendo wanted to Interrogate the Tsukikage for information while Mei been talking to Tendo about the Plan (unscrewing Goemon's Restraints) when the Interrogator joins to torture the Tsukikage Members but Goe, Momo, and Fu were able to escape. When they decided to rescue their family members from Moryo agents and been sheltered on their underground base when the Tsukikage members found out the Yuki is Alive but badly injured from the previous fight and she decided to stop the Project Gekkako at all costs. when the Tsukikage had planned on their attack on Kyuten Science Facility where all Moryo Members and allies been gathered as Mei had wanted to fight Fu in another round as she wanted to kill her but it fails and retreats. While Goemon been facing Theresia Rey despite Theresia had able to fight Goemon but she was defeated as Tendo been walking around because Theresia did not erased her memories from the liquid jelly Tendo slashes Theresia's arm so she could bleed to death as a failure. While Yuki found out the Gekkako Device been operational the Tsukikage had to Retreat and fight another day.

As the Project Gekkako been starting to been fully operational, the Tsukikage had launched a desperate attack on Kyuten Science Facility to end Moryo's plan once and for all. As Goemon had to distract the Moryo's Robots as Fu had to enter the Control Room but Moryo's Robots been pinning them down only been joined by Katrina Tobey and Byakko aid Fu on disrupting the controls of Gekkako Device. While Mei and Aoba been able to knock out Moryo members and their allies with a knock out gas since Mei's betrayal was a ruse so they can destroy Moryo from within and Theresia Ray was alive after Tendo almost had bleed her to death as the Tsukikage had turned the tide on disrupting the countdown Tendo been appeared as she uses a backup computer to start again and she was facing Momo Minamoto in a one on one sword fight. Despite Tendo's skill with a sword, Momo was able to injuring Tendo after a long fight. When the Tsukikage were not able to stop the countdown, their pet owl dropped a bomb on the Project Gekkako and destroyed it as Tendo falls to her death which leads the Moryo Organization's downfall. 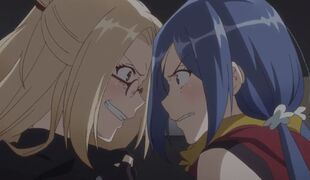 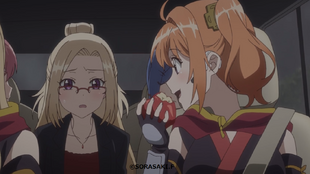 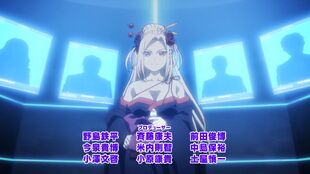 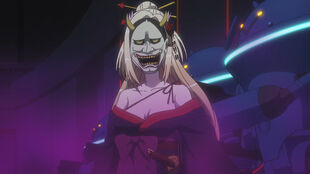 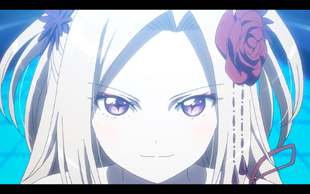 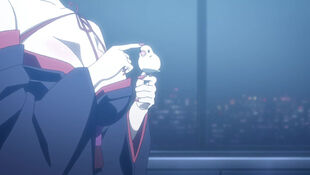 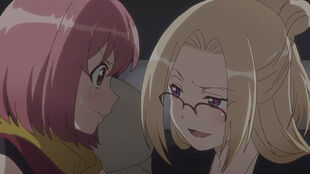 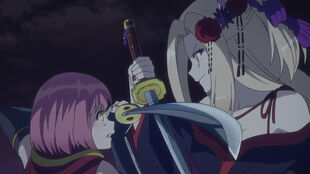 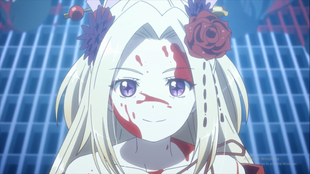 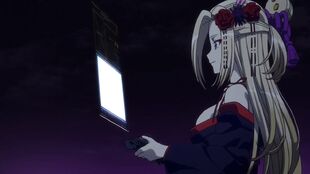 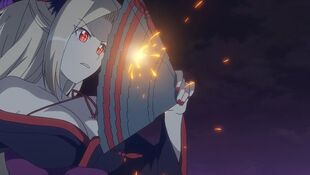 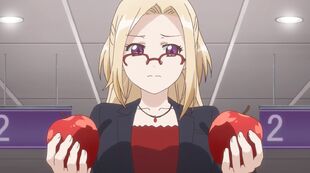 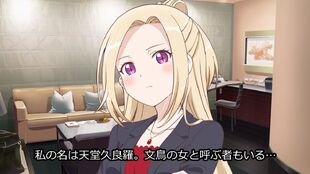 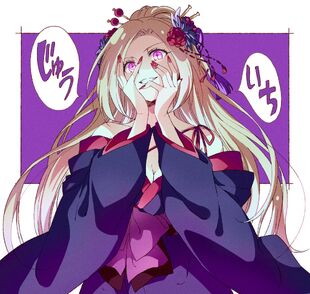 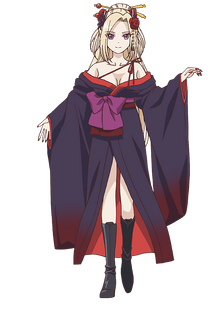 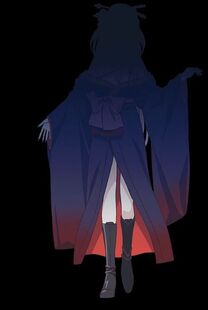 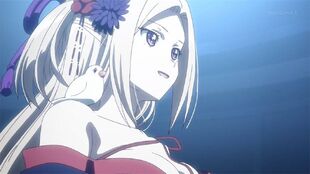 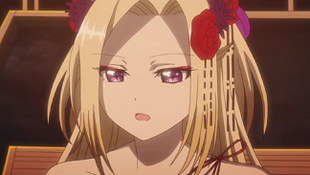 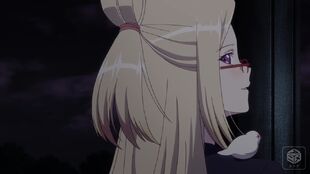 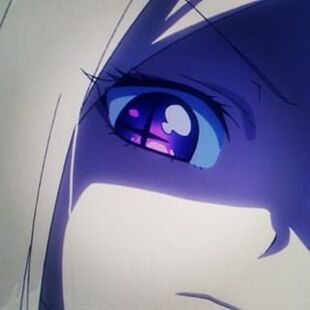 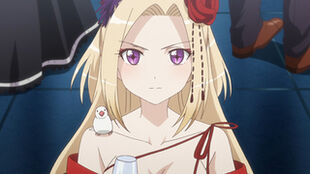 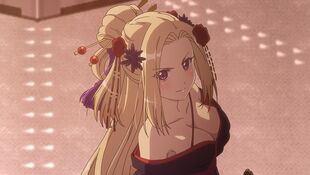 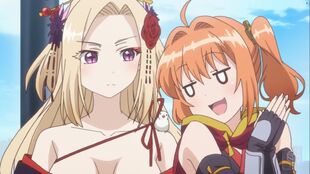 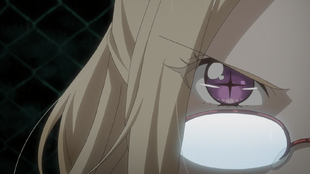 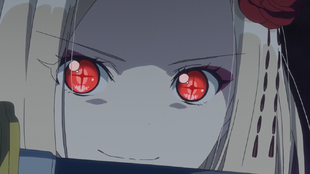 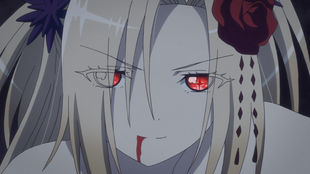 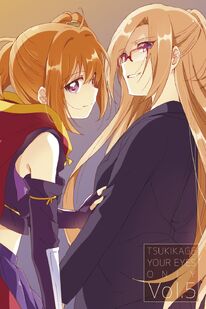 ENG SUB 【Release the Spyce】Intermission Movie Part.6
Add a photo to this gallery