Enforcer for the Witch's Cult (as a zombie).

Warrior of the Volakian Empire.
Member of the Many-Armed Tribe.
Bodyguard of Stride Volakia (formerly).

Become heralded as the strongest in the Volakian Empire (succeeded).

Barbaric Swordsman
Kurgan, also known as Eight-Arms Kurgan or simply Eight-Arms, is a major antagonist in the Japanese dark fantasy franchise Re:Zero − Starting Life in Another World. In the main 2014 light novel series, Kurgan only acted as a posthumous threat as a reanimated zombie. In this regard, Kurgan served as a major antagonist in the fifth story arc. Outside of the main series, he acted as the secondary antagonist of The Love Ballard of the Sword Devil, the third volume of the spin-off light novel series Re:Zero − Starting Life in Another World Ex.

Kurgan was a warrior belonging to the Many-Armed Tribe, a tribe whose members, as implicated in the title, each possessed a multitude of arms surpassing that which was considered ordinary. Kurgan, who was famously heralded as "Eight-Arms" due to the number of limbs he possessed, was a gigantic warrior who stood heads above his foes in the field of battle. His deeds of combat were considered legendary and his name was known far and wide as a formidable warrior.

Roughly forty years ago, Kurgan and his master Stride Volakia were visiting the Kingdom of Lugunica that neighboured their homeland Volakia when they had a confrontation with members of the House of Astrea in the city of Pictat. The encounter quickly turned into a duel between Eight-Arms and the Sword Demon Wilhelm van Astrea that resulted in Kurgan losing six of his eight arms. The duel, known as the Silver Flower Dance of Pictat, was considered a significant event in the history of the world.

Around fifteen years ago, Kurgan was killed defending a Volakian city by the Witch Cult's Sin Archbishop of Greed Regulus Corneas. His body was taken by the Witch Cult, who proceeded to reanimate his corpse as a zombie loyal only to them. Sixteen years later, Kurgan's zombie was involved in a terrorist assault of a Lugunican city. During the attack, Kurgan's body was finally destroyed by Garfiel Tinzel, allowing the Volakian warrior to rest at long last.

Kurgan was a giant who stood around seven feet tall and towered above most other people. His huge body was armored by thick, twisting muscles and his fists were said to be as large as a child's head. The trait that distinguished Kurgan as a member of the Many-Armed Tribe and earned him the legendary appellation "Eight-Arms" was his eight powerful arms. His blue skin and black eyes gave the impression of a vengeful demon. The warrior's physical appearance and combat might bestowed Kurgan with a legendarily intimidating presence. Even the likes of the Master Swordsman Theresia van Astrea failed to suppress a shudder upon gazing at Eight-Arms for the first time.

Reflecting his barbarism, Kurgan wore scant clothing. His ensemble consisted of a tattered black loincloth, black bracers on each forearm that had golden bracelets attached to their bottom hems, and black hosiery that covered his legs below the knees and had the same golden bracelets adorned at the bottom. Kurgan had various pieces of gold jewellery traipsing down his body, including his neck, face, and waist area.

Some years after becoming Stride Volakia's bodyguard, Kurgan accompanied his master into the great city of Pictat. Pictat was located in the Kingdom of Lugunica, a nation located to the north that had a long and storied history of conflict with Volakia. Kurgan was under the impression that his master sought to acquire a piece of refined merchandise from a shop inside the city, although Stride's goals were actually more sinister. Stride actually hoped to confront the Master Swordsman Theresia van Astrea who was visiting the city. Theresia was the greatest warrior in the Kingdom who'd single-handedly ended a decade-long civil war plaguing Lugunica by quelling the insurrectionists. As he'd hoped, Theresia and her father Veltol Astrea eventually arrived and conversed with Stride while Kurgan waited outside listening in on the conversation.

After a short while, the dialogue got so heated that Veltol challenged Stride to a duel for his numerous insults. The noble accepted the challenge, although due to his feeble body he decided to nominate his champion Kurgan to fight in his place. Taking it as his cue, Kurgan entered the shop with a robe draped across his large frame. Kurgan, whose very presence was enough to startle even the Master Swordsman, asked his master why hostilities had kindled. Theresia yelled out the giant's name and identity, grabbing his attention. Kurgan was surprised that the beautiful young woman was able to recognize him and quickly felt a lust building within him, although before he could do anything more than insinuate Stride ordered him to contain himself. Veltol stepped forward and berated Eight-Arms for his uncouth behaviour.

Kurgan, seeing the determination in the weaker man's demeanour, apologized for his rudeness with newfound admiration for him. The two men then formally exchanged names as Theresia and Stride spoke to one another. The Swordsman was shocked at Stride's aggressive behaviour that she perceived as an attempt to damage the relations between Volakia and Lugunica. With conversations out of the way, Veltol and Kurgan prepared to duel despite Theresia's misgivings. Although he knew his opponent was far weaker, Kurgan made his intention to fight at full might as a sign of respect known. Although the dual was quick and brutal, Eight-Arms left his honorable foe alive. Stride used a ring in his possession to curse the gravely wounded Veltol. He told the owner of the store to deliver a message to Theresia and her allies, as the girl had already rushed her father to a nearby hospital. The message instructed the recipient to meet him and Kurgan on a large bridge inside the city unless they wanted the curse to kill Veltol.

The next morning, Kurgan and Stride were confronted on the bridge by Theresia and a man with brown hair and a sword by his hip. The man and Stride immediately began hurling insults at one another, although upon Kurgan's insistence they got down to business. As Stride revealed the ring to his opponents, Theresia issued a challenge of her own. She refused to make their personal feud an international incident by duelling Kurgan, instead opting to have her husband, the brown-haired man, fight in her place. Although Stride was appalled by the idea, Kurgan approached his new opponent and politely introduced himself. Theresia explained that her husband was her equal in swordsmanship and as such had been kept a secret from international ears.

Eight-Arms let out a booming laugh at this revelation, as he had heard the rumors regarding the "Sword Demon" Wilhelm van Astrea who had once defeated Theresia and then taken her as his bride. Wilhelm asked Stride what he wanted if he won the duel, however the nobleman merely stated that since Kurgan would be doing the fighting it would be him who would list demands. Much to the surprise of everyone, Eight-Arms stated that his prize would be Theresia becoming his woman. Although irritated by Kurgan's request, Wilhelm agreed to Kurgan's terms and the legendary duel between Eight-Arms and the Sword Demon commenced.

Around twenty-five years after the death of Stride Volakia, Kurgan was still an active warrior heralded as a mighty hero of Volakia. At the time, Eight-Arms was posted in the Fortress City Gacklar, the most heavily guarded settlement on the Empire's border that housed a garrison of thousands of fierce warriors. Rumors began to spread that a magical item relating to one of the six other Witches of Sin was being placed on auction within the safe walls of Gacklar. Whether or not the information regarding the item were true or not, the Witch Cult, who despised and refused to acknowledge the existence of the other Witches, chose to act. Regulus Corneas, the invincible Sin Archbishop of Greed, assaulted Gacklar and single-handedly laid waste to the entire garrison with ease. Kurgan, the legendary hero that he was, fought Greed in the fallen city. However, the Sin Archbishop proved far too strong for the eight-armed warrior, who finally fell in battle.

The Witch Cult took the corpse of Kurgan and reanimated it, turning him into a mindless puppet who served them unquestionably. Although still formidable, the might of the zombie paled in comparison to the power exhibited by Eight-Arms during life. Kurgan, whose posthumous affiliation with the Witch Cult was unknown, was recognised as a courageous hero and honorable warrior across the world after his death. His popularity led to some people such as Garfiel Tinzel using Kurgan's name in idioms. The loss of Volakia's mightiest resulted in all four nations and their citizens taking the threat posed by the Witch Cult far more seriously. The desolation of Gacklar, like the Silver Flower Dance, became an important event in modern history. In the years following his demise, some Volakians such as Balleroy Temeglyph saw Kurgan's weakness as a betrayal to the Empire, casting dishonor upon his honorable death. 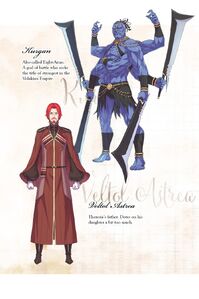 Characters summaries of Kurgan and Lord Veltol Astrea in The Love Ballard of the Sword Devil. 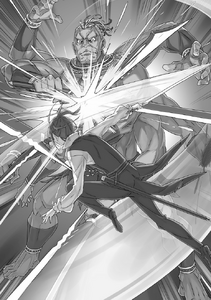