Inflicting pain on others
Deception

Bullying Nao (formerly, as a child)

Kuriko is the main character/major antagonist of Junji Ito's The Bully from his 12th volume of the Horror World series. She was a typical but deadly bully as a child towards the main antagonist Nao before turning into a psychopathic child abuser and implied murderer in her adulthood as a mother to her abused son Hiroshi.

Kuriko and her boyfriend Yutaro sit in a park playground. She says that she wonders if he would still want to marry her if he knew her story. The playground brings up dark memories for Kuriko, and she says she wishes it had been destroyed. But she wants to tell Yutaro about her history before they marry.

As a child she went to the playground to see a boy. That boy was Yutaro. But Yutaro and his friends won't play with her and tell her to go away. A mother and her son approach Kuriko and offers her chocolate to play with her son and then leaves. The quiet young boy introduces himself as Nao. Yutaro and his friends scoff at them and leave. Nao becomes attached to Kuriko and begins to show up by himself at the playground every day to play with her. One day Nao's mother brings cakes to Kuriko's house as a thank you for playing with her son, who had recently moved into town and was having a difficult time making friends.

Kuriko becomes frustrated, feeling obligated to play with Nao instead of with Yutaro. She begins bullying him, yelling in his ear and telling him that there are bugs in it in order to try and chase him away. But the young boy keeps coming back to play with her. She forces him to drink gutter water and beats him with a stick when they are "fencing". When she tries to taunt him into jumping off a high jungle gym Nao's mother shows up to retrieve him and takes him home. The next day Nao doesn't show up, so she goes to his house to ask him to play. She says she was angry to see his mother and asks if he told her anything, which he hadn't. That day she pushes him into the yard of a very aggressive dog, where he is attacked and she runs away. Shortly after Nao and his mother move out of town.

Ending the flashback, Kuriko says that she was a horrible child, but Yutaro doesn't seem fazed. But she says that there is more to the story. She says that she recently ran into Nao, who was all grown up and recognized her. He invited her out to tea like an old friend. His job brought him back into town, and he says that he has a lot to talk about with her. They returned to the playground where Nao confesses that he's loved her all along and never stopped thinking about her. This relieved all her guilt that she'd carried for years. Yutaro is surprised, and asks if she's seen him since. Kuriko says she'd seen him many times since, and that he was showing up that day. She leaves Yutaro for Nao.

Kuriko and Nao happily marry and have a child. But just after the birth of that child, he disappears. Four years pass. Kuriko and her son Hiroshi live alone in a condo. She is a single-mother and refuses to leave in case Nao comes back. One night, Kuriko snaps and accidentally refers to Hiroshi as Nao. Hiroshi asks who Nao is. She says that Nao is his father, and that they look just alike. She begins to reminisce about the way that she bullied him but he always came back, and wishes she could bully Nao again for leaving her. She begins to direct her resentment of Nao towards Hiroshi, calling him Nao, pulling on his ears and blaming him for getting in the way of her and Yutaro as children. Kuriko realizes that this was Nao's revenge all along. She says that she'll take him to the playground and play with him there. Kuriko, dressed as she had been as a child with pigtails and school clothes that are much too small, looking more like a monster than a woman, takes Hiroshi's hand and leads him down the street towards the park.

It is implied that she's always been a psychopath since childhood but her innocence as a child buried it deep in psyche when she nearly killed Nao back then. As a result, she grew up with regret and remourse for what she did to him. When she meets, falls and marries the adult Nao, she had the intention to make it up to him and put the past aside by lving happily together with their unborn child, Hiroshi. However, when Nao left her after childbirth, her distraught about it slowly uncovered her pyschopathy for four years before she finally snapped and sadistically abused her only son, Hiroshi as a surrogate for Nao who is considered the true villain for abandoning his family thus, allowing his son to be abused by Kuriko. 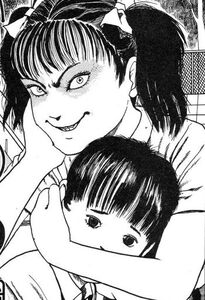 Kuriko and Nao when they were kids. 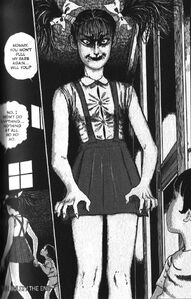 Kuriko preparing to "play" with her son Hiroshi who is a surrogate to Nao. 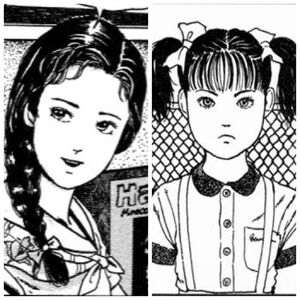 Kuriko as an adult and child.
Add a photo to this gallery

Retrieved from "https://villains.fandom.com/wiki/Kuriko?oldid=3847950"
Community content is available under CC-BY-SA unless otherwise noted.