Carrying out missions for Yggdrasill.

Protect the secrets of the Yggdrasill Corporation.

The Kurokage Troopers are a group of Armored Rider soldiers employed by Yggdrasill Corporation and antagonists in Kamen Rider Gaim. They are modeled after Ryoji Hase's Kurokage suit.

The Kurokage Troopers appeared again to capture Baron after he is defeated by Zangetsu Shin, followed by Kouta moments later after Ryoji's death.

Two Kurokage Troopers brought Kaito and Kouta to Yggdrasill's headquarters, later taking them to a cell. When the two were freed by Mitsuzane, six Kurokage Troopers came to apprehend the trio. After a brief scuffle, Kaito transformed into Baron to fight them as Kota and Mitsuzane ran off in different directions. Mitsuzane was soon after met by three Kurokage Troopers on Dandeliners, transforming into Ryugen to face them.

While Gaim and Baron escaped, about three Kurokage Troopers chase them in the forest before being defeated by the duo.

Sometime later, 12 Kurokage Troopers, supervised by Marika and Ryoma, were stationed to protect a crack from Inves trying to reach Earth from the Helheim side. They fought the fist wave as Kota and Mitsuzane arrived. After defeating the wave, they turned their weapons to Kota when he revealed himself to them. As Kouta and Ryouma were talking a second wave of Inves attacked and they fought and defeated them. A third wave came, now with the assistance of Gaim, fought them. After Inves were defeated and the crack closed, Kouta steals Minato's Peach Energy Lockseed, 3 tried to stop him from getting away but were unsuccessful. The rest of the Kurokage Troopers try to go after Kota from going to the crack of the HQ but Ryoma tells them to let him go. Later, 12 other Kurokage Troopers who were guarding the HQ crack tried to stop Gaim but he got passed them. 3 of the Kurokage Troopers who were in the base tried to fight Gaim but were defeated by him. Later, as Gaim goes through the hallway to destroy the Scalar System control room, two Kurokage Troopers tried to stop him but were also defeated followed by another two.

Like with the other Armored Riders, the Kurokage Troopers' forms are called Arms.

This form is briefly seen during Kurokage's henshin sequence, before the armor attaches. However, this form is completely vulnerable to any incoming attacks when shot at directly in the suit, rather than at the Arms that is descending down on the Rider.

Matsubokkuri Arms is Kurokage's default pinecone-based armored Japanese Ashigaru form. Accessed through the Matubokkuri Lockseed, this form's Arms Weapon is the Kagematsu, while the helmet Kurokage wears is the Matsu Kabuto with the Comb Eye visor. This form debuts in episode 12.

In this form, Kurokage's punching power is on par with that of Gaim in Ichigo Arms, and can kick at the same power as Gaim in all of his Arms. He can also jump a tiny bit less, as well as run a tad bit slower, then Gaim in Orange Arms.

This Arms' finisher is the Shadow Sewing Stab, which has two variations depending on which function Kurokage activates from his Sengoku Driver.

Suika Arms is Kurokage's colossal mecha-like watermelon-based armored Japanese Samurai form. Accessed through the Suika Lockseed, this form's Arms Weapon is the Suika Sojinto, while the helmet Kurokage wears is the Suika Head

This form can interchange into three modes.

Suika Arms is the most massive Arms Change so far, and it shows by having the most monstrous punching and kicking power once in Yoroi Mode. Consequentially, it also has the worst jumping height in all of Rider history, and any Rider can practically outrun it. Though this is rendered moot thanks to Gyro Mode. Also, after a utilization, the Suika Lockseed's color becomes black, indicating that its energy is low and needs time to recharge back to its green color before it can be used again.

This Arms' finisher is the Suika Large Windmill, where Kurokage first traps the target in a watermelon energy ball, then slashes the "watermelon" all over until it blows up, raining fire and "watermelon flesh" as the target is destroyed. 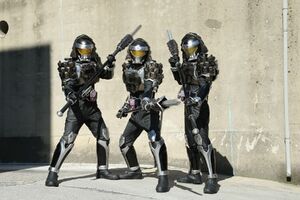 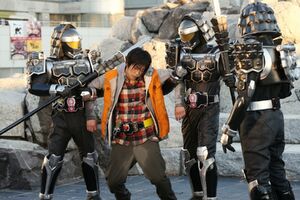 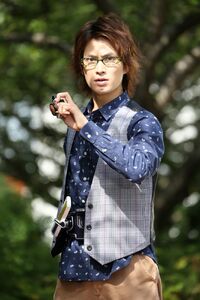 Hideyasu Jonouchi about to transform into a Kurokage Trooper. 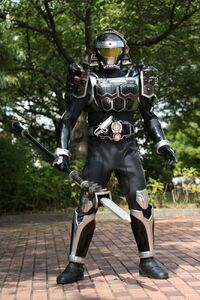 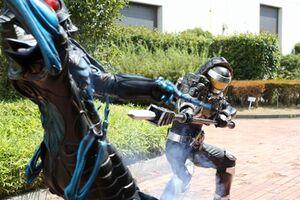 A Kurokage Trooper battling an Advanced Inves.
Add a photo to this gallery

Retrieved from "https://villains.fandom.com/wiki/Kurokage_Troopers?oldid=4067190"
Community content is available under CC-BY-SA unless otherwise noted.