Destroy the Revolutionary Army and Night Raid (formerly).
Be with Wave and reconcile with Akame (succeeded).

Kurome is a supporting antagonist in the manga/anime series Akame Ga Kill! and the deuteragonist in the prequel manga Akame Ga Kill! Zero. She is Akame's younger sister and the second strongest of the Jaegers after General Esdeath, capable of taking on the entirety of Night Raid with her Yatsufusa and almost winning. She is also the only person that can clash swords with Akame and come out unscathed with no allies or supernatural assistance.

Kurome was a young girl with short black hair, and black eyes. She wears a black sailor uniform and a wears a red belt that has a red side skirt cover like Akame. Her shirt is slightly too short as it doesn't cover her belly button. She also wears red gauntlets like Akame. She keeps her Teigu with her at all times. She wears it with long black socks and black shoes.

Kurome was born into a poor family, at some point of her childhood, her parents sold her and her sister Akame to the Empire, and the sisters were forced to participate in a cruel exam, being put inside of a forest inhabited by many Danger Beasts, the only goal being to survive and escape the forest. Of 100 children participating in the exam, Kurome and her sister are among the few who manage to survive, After the two little girls survived by working together, they were drafted into different assassination divisions (because of their superiors reluctance to keep sisters in one group).

After joining her division, Kurome was subjected to cruel treatment as well as forced to ingest experimental drugs, making her body more powerful. Dr. Stylish developed a poison that mimicked the effects of the disease Rubeola and made a deal with Kurome's superior to exchange for 10 male prisoners. Stylish's poison would be used on Kurome's groups first official mission. The Targeted city was poisoned with this fake Rubeola, forcing the Revolutionary spies to flee. Kurome's group was tasked to intercept these spies as they left the city. The group waited for their targets to arrive and finally spotted them, taking their doping pills to enhance their strength as they began their attack. The group initially had the advantage against the spies, but soon the tides began to turn, when Remus was wounded grievously and Wu Ming killed by manner of bisection. Heavily wounded and distraught by the death of their comrade, the group returned to base, where they were treated cruelly and locked up. The groups leader withheld their medication and told them to reflect on their failures in punishment. The leader then heads to the infirmary and inquires about the status of "number 32", a female doctor informs him that Remus is wounded so badly she will never be able to be an assassin again, he then enters the room where Remus attempts to apologize for her failure, but the leader injects her with a vial, euthanizing her.

While her sister eventually became aware of the Empire's evil nature and left it to join Night Raid, Kurome did not have this option due to her constant need to rely on these medicinal drugs, which only the Empire could supply her. Eventually, after having participated in a slaughter with several Empire soldiers, she was given an order to join the Jaegers. She later cooperated with the rest of the Jaegers to annihilate a militia group as their first assignment, but was evidently disappointed in the level of her opponents.

After the fight between Shura and Wave, Kurome displays confidence of her companion's strength by claiming that he will win. After the result of the fight, Kurome and Wave listen to Run's plan to change the Empire from the inside. Just as Run is heading to Wild Hunt's station to take revenge on the one who killed his students, Kurome interrupts him and joins him, claiming that they are no help to the empire in any way.

The two work together for vengeance, with Run luring Champ out of the base and Kurome preventing Cosmina and Enshin from intervening. Kurome summons Natala and Doya to attack them, with Enshin amputating both of Doya's hands and slicing Natala. Two Danger Beasts, summoned by Kurome are easily defeated by the sound waves produced by Cosmina's microphone Teigu. This attack is blocked by Kurome by covering her ears as she cuts Enshin on his back. She then gets corned by the Wild Hunters but just as they attack, Run lifts her up with the help from his Teigu. Run and Kurome get trapped in a whirlwind by Champ's elemental teigu, Run protects Kurome during a fire explosion - taking a lot of damage. The two fall to the ground. Night Raid intervene and Akame and Kurome have a short confrontation, Akame questions why the Jaegers are attacking Wild Hunt. Kurome claims that they were disturbing the peace and prepares to fight Night Raid. Run shoots feathers at Night Raid which are blocked by Tatsumi and the two flee together.

As Run falls, accepting his death with a smile, a mentally unstable Kurome rejects the thought of her comrade dying. Shedding tears; "If Run's gone, Wave will be sad! I don't want you to go too...Let's stay together for a while longer." She stabs Run with her Teigu, who shows a face of despair at her choice, enslaving Run and turning him into her corpse. Kurome stops crying and smiles, happy to keep her comrade "alive", even if he won't be the same. Eventually, Kurome comes to fight against Akame but Wave interrupts the fight and he confesses his love for Kurome and destroyers her teigu to end the fight. The two then defect from the Empire and are seen eating cake.

In manga, she survives the war and the collapse of the Empire, but she will be haunted by the ghosts of victims she killed for the rest of her life and is observed closely by Wave.

Kurome seems to hate her sister for betraying the Empire, or more specifically, betraying her, yet claims that she still loves her, calling her "beloved older sister". Although she shares some traits with her sister, such as her social awkwardness and her gluttonous desire to eat candy, in place of the meat that Akame is shown to eat, she is much more aloof and seems to show darker sides of her when it comes to killing her enemies. She is cold and ruthless in battle, usually ending the lives of her enemies as one would expect from a seasoned assassin.

Secretly, she is very scared of being seen as weak, knowing that, in the Assassination Division, if she became dead weight she'd be taken out to keep her silent. This has a lingering effect of her upbringing, as she almost did suffer this fate, were it not for the drug therapy she later underwent. She has shown this side of herself, unintentionally, to Wave, who she seems to have developed some trust towards in comparison to the other members of Jaeger.

She holds some form of unstable mental attachment to her fallen comrades as she keeps them as her corpse dolls. This warped psyche was most likely fueled by the empire; as claimed by Run before being enslaved. When Run was severely injured and about to die, she states that it allows them to be "together forever", and she intends to add her sister to this collection. She also seems to play with the corpses of those she has killed, as well as keeping powerful ones to use in her permanent collection which is limited to 8.

She has initially introduced as the ruthless and psychopathic assassin whose main goal in life was being her older sister's sole murderer. Eventually through her interactions within the Jaegars and Wave's kindness she begins to show a kinder and sweeter side behind closed doors. This change is lamp shaded by Run, when she encounters Akame for the third time, announcing her intent to take her down for the sake of the people, and not her deep-seated grudge towards her. This is unfortunately averted, as when Run is slowly dying from his wounds obtained in their battle against Wild Hunt, she unexpectedly decides that instead of letting Run die peacefully, she'll instead Mercy Kill him and force him to continue living as one of her corpse puppets.

Kurome wields an offensive Teigu like her sister, in the form of a sword named "March of the Dead: Yatsufusa", which allows her to enslave up to 8 enemies killed with the Teigu. However, the corpses do not show any emotion. Also like her sister, she is extremely skilled in the art of the sword and assassination. She was able to land a hit on Esdeath. After Chelsea wounded her, Kurome has been visibly more tired and weaker in combat. A notable example is when she fought the entire Night Raid she was able to summon and control eight corpse puppets and still have the strength to fend off Akame simultaneously while largely keeping the pace of the battle. After the failed assassination she can barely summon two puppets, and is suffering from a potentially Incurable Cough of Death; thus losing a subsequent battle of speed against Akame, resulting in the death of Bolic.

The following corpses have been used by Kurome:

Kurome wants to kill her, and vice versa. They are sisters grew up together as assassins after being sold by their parents. Before they were assassins, it was depicted that both of them were very close; neither of them were willing to leave from each other when they were notified that they would be receiving their training separately. In chapter 66, her final battle with Akame was stopped by Wave, and Kurome and Akame were able to reconcile now that Kurome has a chance to survive for the future. They rekindle their sisterly love for one another before Kurome leaves with Wave.

They are friends to an extent, and play chess together during their free time. Though she does not talk much, Kurome is usually seen walking with Wave. Whenever Wave's attempt to comfort a teammate fails, she pats him on the shoulder. Their relationship has developed further following Kurome's assassination attempt; she confides her fear of being killed for being weak and useless to him, and thanks him for his concern. She even expresses real concern when Wave is near breaking point for the actions of Wild Hunt, and when he angered Syura. Following Wave's fight with Syura, she shows signs of romantic affection toward him tending his wounds, and was very grateful for him when he protected her from Syura, who attempted to take her as his personal toy. Wave's determination to protect Kurome's life clashes with her desire to fight Akame, culminating in her kissing Wave at one point to distract him from upcoming confrontation. Wave however manages to prevail against the arranged fight and manages to win Kurome over, with the two properly forming a relationship and defect from the Empire together.

In Chapter 48, Run and Kurome work together to get revenge on Wild Hunt. They display great teamwork and loyalty to one another, as he is able to save her multiple times. When he is about to die, Kurome could not bear to lose her comrade, so she turned him into a puppet.

Kurome and Bols had a very friendly relationship for being members of the same team. Both were targeted for assassination, and Bols was killed. Kurome became enraged and ordered her puppets to brutally kill Chelsea for Bols's death. 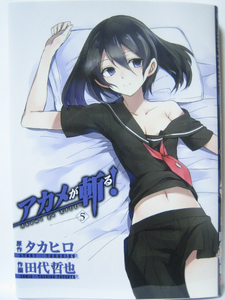 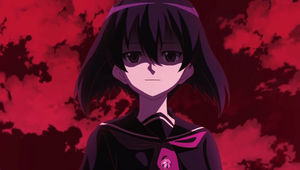 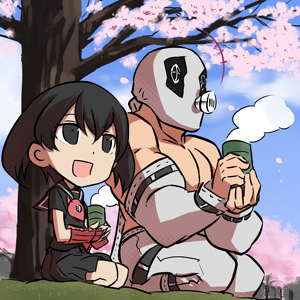 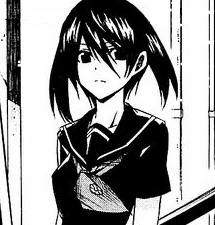 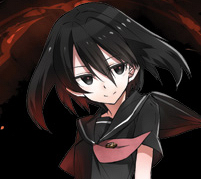 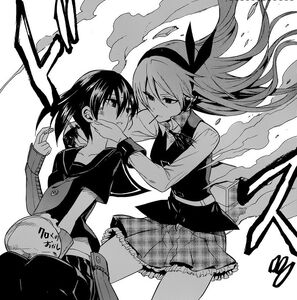 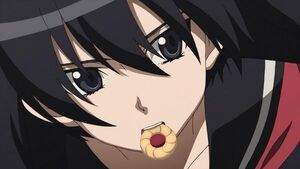 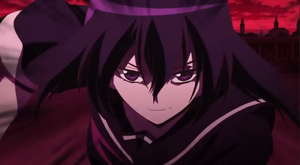 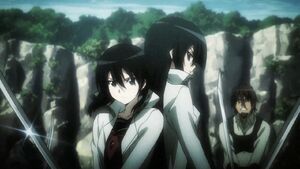 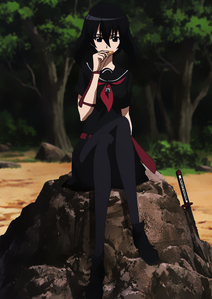 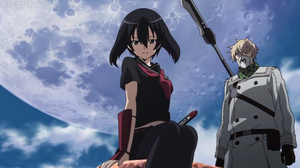 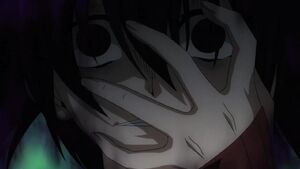 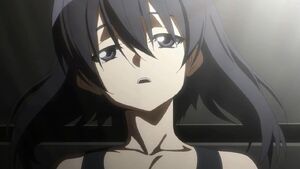 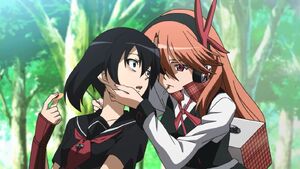 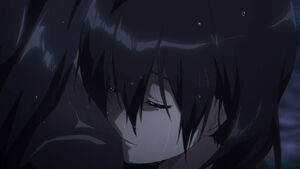 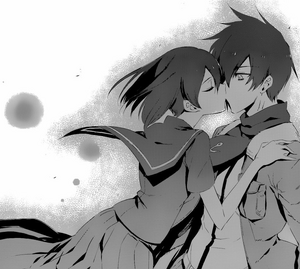 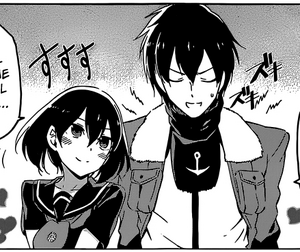 Kurome and Wave together. 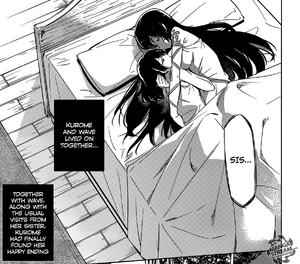 Akame visiting Kurome from time to time at the end of the manga.