Kill the Imawanos and take over Japan (failed).

Kurow is an assassin who works for the Darkside Society Organization. After Hyo Imawano's plan to rule Japan fails, the DSO marks the entire Imawano clan to be killed, sending Kurow to do the job. Kurow, however, had his own plans, seeking to take over Japan only for himself.

Kurow enlists himself on Justice High School, in order to approach both Hyo and the school principal, Raizo Imawano. Kurow attacks Raizo, who is left unconscious, and later attacks Hyo as well, brainwashing him after sensing the evil power within him. Kurow then puts his plans into motion, seeking to generate chaos and discord amongst the various schools. He first brainwashes the students from the Pacific High School during the Taiyo-Pacific event, making the various students fight each other. Kurow then brainwashes Daigo Kazama, ordering him to command the students from Gedo High to attack the other schools, as well as sending Momo Karuizawa and his sister Yurika Kirishima to infiltrate Gorin High and Seijyun High respectively and separate the students. At the same time, Kurow disguises himself as Batsu, in order to ruin Batsu's reputation and isolate him, which would make him an easy target.

Unfortunately, Kurow's plan starts to backfire on him, as the students from the various schools start investigating the events and are eventually led to him. Batsu and the other students from Taiyo High fight Kurow, who ends outnumbered and without options left (as Yurika and Momo eventually switch sides), so he decides to send Hyo after them. However, Hyo reveals that he hadn't been affected by Kurow's brainwashing at all, pretending this whole time just to see how far Kurow could go. Enraged, Kurow attacks Hyo, but he ends badly wounded. Their fight breaks Hyo's sword, which releases the spirit of Hyo's father that had been imprisoned there. Hyo is possessed by the spirit but ends defeated as well. Kurow is sent to the hospital, but after three days he runs away without leaving a trace. 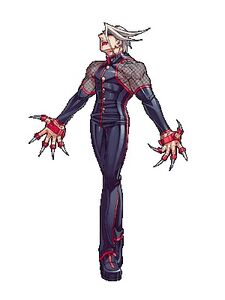