Make Kumorasaki be with him (failed)

Kurozumi Orochi (in Japanese: 黒炭オロチ, Kurozumi Orochi) is a major antagonist in One Piece. He is the shogun of Wano Country. Many years ago, he allied with Kaido and the Beasts Pirates to kill Kozuki Oden. Since his rule, Wano Country has been polluted and most of the citizens in the country are oppressed by his rule.

He is the secondary antagonist of the Wano Country Arc and one of the central antagonists in the Yonko Saga.

Orochi is considered to be a cruel individual based on what the Kozuki retainers and other individuals have said about him. In the past he was responsible for Kozuki Oden's death and became the shogun of Wano hinting at his intentions to gain power through cruel ways. As the ruler of the Wano Country, Kurozumi has access to the food and water that was not poisoned through the pollution but does not care about the majority of the country that does not have the eatable food and drinkable water. He also does not care about the citizens who are oppressed by the authority of the Beast Pirates. Orochi is also paranoid and fearful of Kozuki Toki's prophecy that he would be overthrown and killed one night 20 years after Oden's death by nine samurais. Orochi banned all training methods in Wano which his subordinates merely viewed him a coward.

Orochi also have an interest in the Wano Country's top idol Kumorasaki, and wants to make her his woman but only show his fury after she rejected him. In business dealings with CP-0, Orochi is willing to get what he wants and feels that he has a lot of power. Because of his allegiance to Kaido, Orochi is confident and does not have any fear of the Celestial Dragons and the Marines. At the banquet, Orochi shows that he enjoys the banquet and is relaxed.

As a child, Orochi lived in poverty. One day a mysterious elderly women approached Orochi. She told him about his family, the Kurozumi Family, history's in Wano. She told him that Orochi's grandfather attempted to usurp the position of Wano. However, when he was caught, he was forced to commit suicide for his punishment. Since that inicident, the Kurozumi name, had taboo associated with it for the attempt to poison the shogun. When Orochi heard the story, he was shocked and began to work with the elderly woman to become the shogun of the country.

Orochi worked as a servant for one of Wano's daimyos, Shimotsuki Yasuie. One day during his service, Orochi met Oden, Kinemon, and Denjiro. When Yasuie's home was a mess, Orochi says that Oden was responsible for the mess and for stealing the money. At some point, Orochi quits serving under Yasuie and Oden gives money to support him. Orochi serves under the Kozuki Family specifically under Kozuki Sukiyaki. The elderly woman disguised herself as Oden to help vouch for him to get serve under Sukiyaki. During this time, he hoarded gold and other valuable items so that he can gain wealth and power. While serving under Sukiyaki, Orochi would poison the shogun over time causing his health to deteriorate. Orochi would work alongside the elderly woman and mock the people he considered his enemy. At some point Sukiyaki died from his poor health. The elderly woman disguised as Sukiyaki nominated Orochi as Sukiyaki's successor as the shogun of Wano. Orochi reveals to Yasuie and the others that he was a Kurozumi. Yasuie and the others were surprised of his true identity and wanted to know why he hid it from them. Orochi gave a dry apology before accepting the position.

When Kozuki Oden rose to power in Wano, Orochi was aware of this and wanted to know about what Oden knows about Raftel. Around the same time Orochi came into contact with Kaido and became allies. Oden refused to tell them anything about Raftel. With Kaido's help, Orochi managed to execute Oden, destroy his castle, and take the position as the new shogun of the Wano Country from Kozuki Sukiyaki. Before her death, Kozuki Toki prophesied that Orochi would meet his end 20 years later one night when nine samurais would appear. Since her prophecy, Orochi has been paranoid about that possibility.

Since his usurpation, he maintained a solid rule on Wano Country. Under his allegiance with Kaido, he allows the Beasts Pirates to set up factories in Wano to create weapons. Orochi and Kaido both obtained the smile devil fruit from Doflamingo and Caesar. Some of the people in the Flower Capital ate the smile fruits. Not liking the oppressed citizen's apathy and rage, Orochi devised a plan to put the smile fruits in with the other leftover food from the Flower Capital and send it to leftover towns like Ebisu Town. As a result, the people who ate the smile fruit can no longer express anger, sorrow, or any negative emotions and can only smile and laugh.

Orochi also maintains an oppressive rule over Wano by allowing the factories to pollute the country and the food and water supply leaving most of the country, except for the Flower Capital (his territory) and Kaido's territory, with tainted food and water supply. He also managed to produce propaganda media to make himself and the Beasts Pirates look like heroes after his usurpation of the country. His tactic of propaganda is in the news and taught in the classroom to show Orochi and Kaido as good people. Orochi also set up laws to prohibit any uprising by having the swords and martial arts training forbidden to people in the country. Over the years, many people who have stood against and opposed Orochi have been imprisoned in Udon Prison. When Kin'emon, Kanjuro, Momonosuke, Kiku, and Raizo appeared in Wano, Orochi and Kaido's forces tried to capture them but they managed to escape.

Orochi appears behind shoji doors when an individual tells him that Kumorasaki will be coming to his banquet. Orochi laughs and declares that he will make Kumorasaki be with him. Orochi later had a meeting with CP-0. Orochi remarks that because Doflamingo (the World Government's intermediary) is no longer involved in the trading deals, the World Government now have to come directly to him and Kaido. Orochi demands that the World Government gives him Dr. Vegapunk since he already has warships. One member of CP-0 rejects his demand and Orochi shoots another member knocking their hat off. Orochi says with Kaido by his side he is not afraid of the Celestial Dragons or the Marines.

Orochi appears at the Banquet and meets Kumorasaki. He is happy at the banquet and tells everyone that the Fire Festival is next week. He also tells everyone to enjoy themselves at his banquet. Orochi parties with the people at his banquet until he sees Robin emerges. He welcomes her and then Komurasaki gets Orochi's attention. Orochi then tells the people at the banquet that it has been 20 years since Kozuki Oden's death. He tells everyone about Kozuki Toki's prophecy about how nine powerful fighters will emerge 20 years after Oden's death to take vengeance against him and take down Kaido. Unbeknownst to Orochi, most of his underlings do not believe in the prophecy. A girl, Toko, laughed uncontrollably and Orochi became enraged and attempted to kill her with his sword. People tries to tell Orochi she was a child and he ignored them. Komurasaki slaps Orochi and the guests at the banquet demand that she apologizes. Komurasaki refuses and stands in front of Orochi. Enraged at her actions, Orochi transforms into his eight-headed snake form.

He tells Komurasaki that he will forgive her if she begged for her life and gives an apology but she refused. Orochi attacks his own men out of frustration by biting them with his snake heads. He then attacks her by having her caught in one of his mouths. She is freed by him and shortly after she is bisected by Kyoshiro. Orochi is shocked at Komurasaki's death and yells at Kyoshiro. Kyoshiro reminds Orochi that anyone that attacks the shogun gets killed. Orochi looks at Komurasaki on the floor with an upset expression and decides to lash out at Toko for laughing at him and blaming her for Komurasaki's death. As he chases Robin who is carrying Toko, Nami attacks Orochi with Big Mom's homie, Zeus, with a lightning attack.

After the events of the banquet, Orochi sends an assassin, Kamazo, after Toko for laughing in his banquet. In addition, Orochi became angry when he learned about Kin'emon's symbol and secret message. As a result of this, Orochi's men and the Beasts Pirates begin to arrest people who have the symbols on them. Orochi continues to cry and mourn over the death of Komurasaki and gets angry when Fukurokujo tries to report the latest news to him. At first Orochi does not care about the capture of the Witching Hour Boy, but soon becomes shocked when he learn the identity of the individual as, Yasuie, a man who was once a daimyo and ally to Kozuki Oden. After learning this information, Orochi looks forward to seeing Yasuie's execution on the same day as Komurasaki's funeral. Orochi tells his men to prepare his horse.

As Orochi approaches the execution platform, Yasuie begins his speech and starts to insult Orochi. Orochi gets angry at Yasuie's insults as he calls Orochi a coward. When Orochi reaches the execution platform with his men, they execute Yasuie. Orochi continues to mock Yasuie after executing him. He notices Toko near Yasuie's dead body and begins to blame her for Komurasaki's death. Orochi realizes that Toko is Yasuie's daughter and attempts to kill her by shooting her until Zoro and Sanji intercepts his attack. Orochi gets enraged when Sanji and Zoro saves Toko. Zoro attempts to attack Orochi with his 720 pound phoenix move and he is left shocked at the attack but Kyoshiro blocks it. When things become hectic near the execution site, Orochi retreats and orders his men to kill everyone who stands against him. He cheers on his men to execute anyone who he perceives to be his enemy as his men escorts him out of the chaotic situation in the city.

After the situation in the city and getting to the Flower capital, Orochi is angry to hear that the Straw Hats and their accomplices have escaped. Fukurokujo tells him that they captured Trafalgar Law and that with him captured, the pirates will fight among themselves. Fukurokujo tells Orochi that they will use any torture method available to work in their favor. Orochi was happy to hear what was happening.

Orochi receives information that revealed the area where the rebel forces would be meeting at and addition information about Kozuki Hiyori being alive. Orochi is happy to know about the information on the rebels. He instructs his men to sabotage the areas where the rebel forces would be meeting. As a result, the alliance members are not able to meet and coordinate to initiate their plan against Orochi and Kaido. The next day, Orochi is seen with his men preparing to go to Onigashima for the Fire Festival. 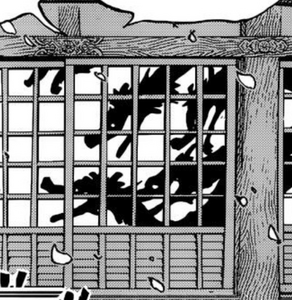 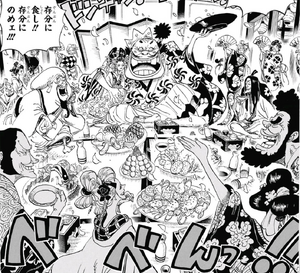 Orochi at the banquet. 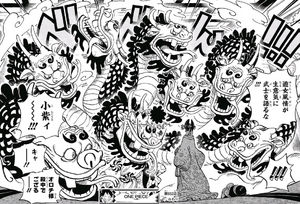 Orochi in his Yamata no Orochi form.

Orochi's color scheme.
Add a photo to this gallery

Retrieved from "https://villains.fandom.com/wiki/Kurozumi_Orochi?oldid=3479857"
Community content is available under CC-BY-SA unless otherwise noted.