NOTE: This article is about the incarnation of Kurse from the Marvel Cinematic film series. The mainstream version can be found here: Kurse (Marvel).

Kurse
The Last of the Kursed
Monster

Second-in-Command of the Dark Elves

Aid Malekith in plunging the entire universe into darkness (failed).

Kurse (also known as Algrim the Strong) is the secondary antagonist of the 2013 Marvel Cinematic Universe film Thor: The Dark World.

He is a Dark Elf who served as the right-hand man to Malekith. Loyally serving his master during the war against the Asgardians, he was one of the few Dark Elves who survived the catastrophe that almost wiped out their race. 5,000 years later, Algrim did not hesitate to sacrifice himself to transform into the last of the Kursed, a Dark Elf "super soldier", so they could unleash their revenge on Asgard.

He was portrayed by Adewale Akinnuoye-Agbaje, who also portrayed Lock-Nah in The Mummy Returns, Nykwana Wombosi in The Bourne Identity, Malko in Game of Thrones, Simon Adebisi in Oz, Killer Croc in Suicide Squad.

Algrim is first seen fighting alongside his leader Malekith against the forces of Asgard being led by King Bor, father of Odin. Malekith and his forces aim to unleash his weapon the Aether, in order to plunge all nine realms into darkness. However Malekith and Algrim are defeated and forced to flee and live in suspended animation until the Aether once again awakens them.

Thousands of years later, human scientist, and Thor's love interest, Jane Foster, becomes the living host of the Aether upon accidentally discovering it. This awakens Malekith and the rest of the Dark Elves including Algrim. Upon learning that Foster has been taken to Asgard by Thor, Malekith begins his plans of attack by giving Algrim a powerful magical stone and helmet that will transform him into a fierce warrior and secretly places him among the marauder prisoners being transported to Asgard's prison cells. Once in the cell Algrim cracks the stone, which transforms him into the powerful Kurse.

Utilizing his new powers Kurse breaks free and proceeds to unleash all of the other prisoners (including Duhg and the Marauders) within Asgard's holding cells, resulting in a massive skirmish between the freed prisoners and Asgard's forces. Kurse makes his way to Asgard's defense generator, killing numerous soldires along the way, before destroying the generator effectively leaving Asgard defenseless. Malekith, with his army of Dark Elves then invade Asgard and make their way to Jane's location. Once they find Foster they learn that she has been hidden away and they are confronted by Frigga, mother of Thor, she briefly battles Malekith only to be stopped by Kurse, who shortly after stabs her in the back with his sword, killing her and enraging Thor who finally enters the room. Thor burns Malekith's face and throws his hammer at Kurse but it is to no avail as he and his master are able to make their escape.

Later, Malekith is taken to their home realm, Svartalfheim, to heal from his wounds. Eventually Thor and Loki along with Jane, track Malekith to his realm, once there Malekith awakes from his healing chamber and senses the Aether's presence. Kurse then accompanies his master outside of their ship to confront the two Asgardians. After a staged betrayal by Loki and a failed attempt to destroy the Aether, Kurse engages Thor in one on one combat while Malekith, now in possession of the Aether, flees to Earth.

Kurse uses his strength to pummel the god of thunder into the ground. However before he can cause any further damage Kurse is impaled with a spear by Loki, saving his brother from possible death. Kurse faces Loki and impales him on the same spear and throws him to the ground seemingly mortally wounded. Just as Kurse approaches Loki to finish him, the god of mischief points out that he had activated one of Kurse's Black hole grenades dangling from his waist. Before Kurse can act the grenade detonates breaking Kurse to pieces and sucking him into the black hole, killing the monster once and for all and avenging Frigga.

Kurse is only mentioned in the film as it took place following the events of Thor: Ragnarok. After being rescued by the Guardians of the Galaxy from a rampage caused by notorious alien warlord Thanos, Thor explains his adventures to them while mentioning about losing his mother to Kurse's strategic onslaught.

Algrim's Dark Elf physiology already made his abilities much greater than that of a human being. However, as a Kursed, he became one of the physically most powerful beings within the Nine Realms that could surpass even Thor's immense strength (a feat acquired by barely anyone). 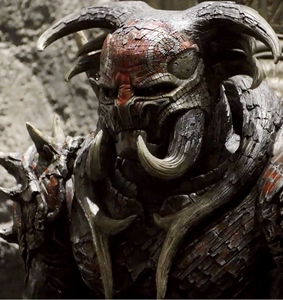 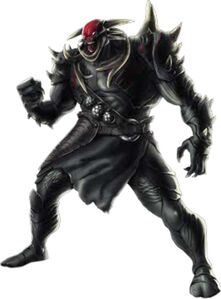 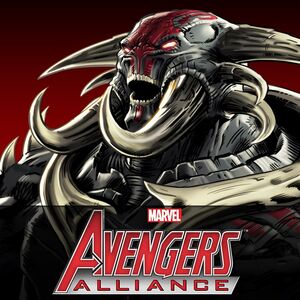 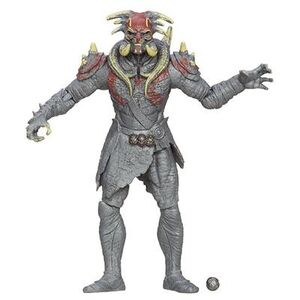 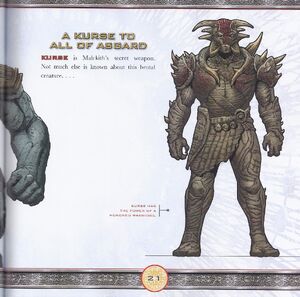 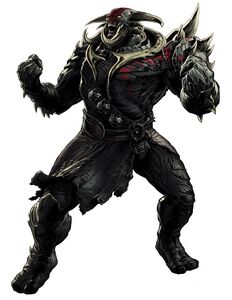 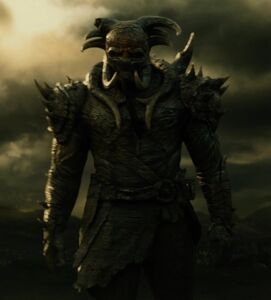 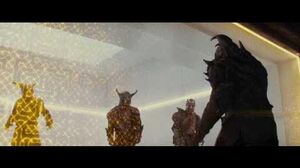