Verbally abusing his employees when they point out the obvious.

Mentioning "the grinder".
Belittling Good Burger and its workers

Put Good Burger out of business and make Mondo Burger the #1 fast food chain in the world.

Avoid getting caught by authorities.
Find out Ed's sauce recipe to make his burgers more delicious and exquisite.
Incriminate Ed & Dexter to be spies and frauds in order to claim precaution to Mondo Burger's assurance of safety (all failed).

Kurt Bozwell is the main antagonist of the 1997 Nickelodeon comedy movie Good Burger. He is the owner and manager of Mondo Burger and the arch-enemy of both Ed and Dexter.

His goal is to put Good Burger out of business and make Mondo Burger the #1 fast food chain in the world.

He was portrayed by retired actor Jan Schweiterman.

Kurt Bozwell is best described as rude, egotistical, arrogant, aloof, heartless and selfish. He throws a whole lot of insults, boasts and slam-downs to just about everyone. Kurt is also extremely abusive to his Mondo employees, as he insists that their lives now revolve around Mondo Burger, and that he essentially owns them, he has no friends at all, minus his two minions, Troy and Griffin, and only cares about himself, and he will stop at nothing to put Good Burger out of business. Kurt uses the illegal chemical Triampathol to make his burgers big and enormous.

He states that he doesn't know what side effects his burger-growth chemicals have on customers, nor does he care. Thus he has no regard for the well-being of his Mondo customers—only for the money and popularity they give to his restaurant. He crosses the line when he drops shark poison into Ed's sauce, not caring at all that it would severely harm or even kill several innocent people.

All in all, Kurt's greed and obsession of his restaurant being #1 even if he had to do illegal things to make it happen, leads to his restaurant's downfall as well as his own.

In an attempt for pay for the damages belonging to his teacher, Dexter Reed (one of the main protagonists of the film) tries to work for Kurt at Mondo Burger, but Kurt fired Dexter for horsing around, so Dexter decided to go working for Good Burger. However, Kurt is upset that Good Burger is becoming more popular due to a new sauce created by Dexter's friend Ed (the other protagonist). Figuring that Good Burger won't stand a chance if Mondo Burger has bigger burgers and Ed's sauce, Kurt attempts to steal the recipe (such as offering Ed a job at Mondo Burger—which he declines and trying to get sexy woman Roxanne to seduce Ed to reveal the sauce recipe), only to fail several times.

Dexter and Ed later learn that something is wrong with Mondo Burger after they attempt to feed a dog with it, since the dog does not actually like it. Suspicious about this, the two disguises themselves as ladies and went to Mondo Burger, where they found out that Kurt has been making bigger burgers by using an illegal chemical called Triampathol. They attempt to inform the authorities, but Kurt (having spotted them through their disguises) had his henchmen Troy and Griffin to admit the two into the Demented Hills asylum to prevent them from spilling the beans about the illegal chemical.

Later, Kurt decides that if he can't have Ed's sauce, no one can. That night, he and his cohorts sneak into Good Burger and spike Ed's sauce with shark poison when Otis, the elderly employee at Good Burger, catches them in the act. Kurt explains that his shark poison will put Good Burger out of business once several customers get food poisoning by the next day so that Mondo Burger will be the sole burger joint in town. He then has Otis admitted to the asylum as well.

However, Dexter, Ed and Otis manage to escape Demented Hills and arrive just in time to stop any customers from eating the contaminated sauce, warning the staff of Good Burger about Kurt's attempted sabotage. Dexter and Ed then head over to Mondo Burger to get a hold of one of Kurt's Triampathol canisters, planning to turn it over to the authorities. While Dexter distracts Kurt and his goons, Ed sneaks over to grab a Triampathol canister. As Ed reaches for a can, he accidentally knocks one over and it falls in the meat vat, spilling the illegal chemical into it. This gives him an idea. He then grabs another of the cans and purposefully pours all it's contents into Mondo Burger's meat supply.

As Kurt corners Dexter and Ed, the latter smugly reveals he poured all the chemical into the vat, causing the burgers as they go through the grill to grow enormous and explode. This causes the restaurant to shake violently, and the customers and staff flee from the scene. Kurt, Troy and Griffin try to shut down the grill, but one of the enormous burgers explodes in their faces, causing them to flee with others while the restaurant undergoes extreme damage as it collapses.

The scene then attracts a number of policemen and firemen, where they find the Triampathol induced in the remaining Mondo burgers, thus exposing Kurt's true colors. Kurt is arrested while Troy and Griffin are questioned by other policemen. After Ed and Dexter confessed of Kurt's use of the illegal food additives to make the burgers big and beefy, Kurt yells that they are lying, desperately trying to save face. However, one of the officers already found the remaining Triampathol canisters, proving Kurt's guilt, so they take Kurt to jail. As the cops lead a humiliated Kurt away and place him in the back of a police car, Dexter and Ed taunt him and yell "Hey, hey, remember: when you mess with Good Burger... YOU go in the grinder!" Thus with Mondo Burger shut down, Ed and Dexter are praised as heroes for saving Good Burger. It is unknown what happens to Kurt after this, but it is very likely he was sentenced to spend the rest of his life in jail. 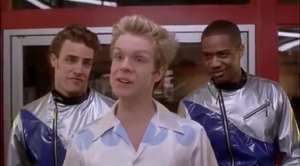 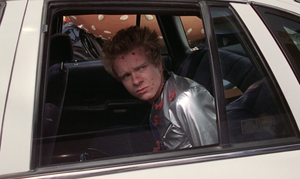 Kurt's defeat as he goes "into the grinder" for all of his crimes after being exposed of his true colors. 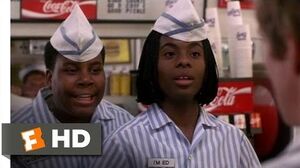 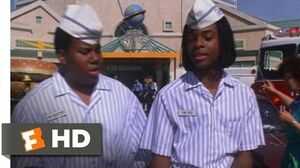