Working as a terrorist.

Kill Ethan Hunt and his team.

Steal a nuclear launch-control device and use it to ignite a nuclear conflict between Russia and the United States of America (both failed).

He was a Swedish-born Russian nuclear strategist and a terrorist who attempted to ignite a conflict between Russia and the United States, hoping to strengthen the remnants of humanity that are surviving and ultimately serve humanity.

He was portrayed by the late Michael Nyqvist, who also played Viggo Tarasov in John Wick, Nikola Kozlow in Abduction, and Lothar Kraftzcyk in the Wallander TV series.

Born in Sweden c. 1961, Kurt Hendricks served in the Swedish Special Forces in his youth. He later became the Professor of Physics at Stockholm University where he specialized in the minutiae of the nuclear endgame theory. Hendricks was regarded as a genius, with an intelligence quotient of 190. Despite this, the university forced him to resign due to Hendricks' outlandish theories and claims of insanity.

Following this, Hendricks was affiliated with the Russian Central Command during the Cold War, wherein his job was to "predict the unthinkable". After twenty years in his role as a nuclear strategist, Hendricks came up with the concept of nuclear war in the place of natural order after following the examples of Hiroshima and Nagasaki. Hendricks then worked in the Kremlin as a nuclear strategist, where he formulated a plan to steal a briefcase with nuclear launch codes to facilitate his concept of world destruction.

Hendricks' plan is to instigate a nuclear conflict between Russia and America. His strategy for this conflict is to ignite a global nuclear exchange and thus eliminate most of the world's population. With most of the world's people wiped out (and presumably their old conflicts and hatreds along with them), a new era of "peace" could be ushered in. Hendricks uses the code name; Cobalt, to prevent his true identity from surfacing. His activities as an extremist remains undetected, since he acts only under the code name. The Impossible Mission Force chases Cobalt without knowing his identity, and discovers that he was one of the top nuclear strategists in Russian intelligence. To expose his true identity, IMF agent Ethan Hunt is sent to infiltrate the Moscow Kremlin and find Cobalt's high-security file. However, Hendricks secretly plans to arrange the destruction of the Kremlin in order to steal a nuclear launch control-device while ultimately placing the blame on the IMF and also in order to facilitate the conflict between Russia and the United States.

After strangling a guard, Hendricks uses his radio to ask in English if the "team leader" has already entered the archive. This gives the impression that the Kremlin has been infiltrated by enemy agents - which is true, after all - and so Cobalt can make sure that the alarm goes off and the guards rush in to check the archive. But Hendricks continues and "tells" this team leader that the detonation can occur at any time.

After Hendricks has the bomb armed, he makes his way outside. On the way he past Ethan Hunt, who is disguised as a Russian general, and greets him. Since Ethan does not recognize his true identity and thus his face, he does not feel suspicious and he greets him back. Hendricks later manages to get out in time, where Ethan sees him again on Red Square and realizes what has happened. However, at the same moment, the bomb explodes and destroys both the Kremlin and much of the square and the American gets injured in the explosion. He cannot follow Cobalt, so he is able to make his successful escape.

Later, Ethan meets with the IMF's Secretary and chief analyst William Brandt in their SUV and Brandt confirms that the individual whom Ethan met at the Kremlin was indeed Kurt Hendricks. He explains that Hendricks is an intelligent, but deranged nuclear physicist and that he bombed the Kremlin in order to steal a nuclear launch-control device from the Russians undetected. Upon viewing archival footage of Hendricks during the Cold War, they realize that his plan is to start a nuclear war so as to usher in the next phase of human evolution. However, the secretary tells that the agency is officially disavowed because of the Kremlin bombing and his team is tasked with stopping Hendricks and bringing his conspiracy to light, or be hunted down as terrorists responsible for the bombing. When Leonid Lisenker, a nuclear code expert, attempts to leave Russia in the wake of the Kremlin bombing, Hendricks and his right-hand man Marius Wistrom kidnap his wife Anna and son Alex, forcing him to grudgingly work alongside him.

Hendricks later arranges a meeting with French professional killer Sabine Moreau to acquire the launch codes that she stole from late IMF agent Trevor Hanaway. In order to avoid attracting attention, he wears a latex mask and poses as Wistrom. The IMF decides not to stop "Wistrom" and to let him take them to Hendricks, unaware that he is there. The IMF plans to deceive "Wistrom" by giving him false codes. The agency also wants to ensure that "Wistrom" does not meet the real Moreau and sends his only female agent, Jane Carter, to meet "Wistrom" posing as Moreau.

When Hendricks arrives in Dubai with Lisenker, the IMF team immediately realizes that their plan with the wrong codes will not work because Lisenker will authenticate them immediately to "Wistrom". To give them time, Benjamin "Benji" Dunn slows the elevator by making it stop at lower floors. When Hendricks arrives on the right floor with Lisenker, Jane is waiting for them pretending to be Moreau. Hendricks claims to be a worshiper of her job and after sitting down, Jane asks for payment. Hendricks responds that he wants to see the codes first. The conversation is interrupted as Benji knocks on the door, disguised as a waiter he enters the room with tea. The knocking startles Hendricks and Jane reassures him she asked for it. Nevertheless, Hendricks refuses tea.

Hendricks hands the diamonds to Jane and receives a suitcase, which is locked. When Hendricks is displeased Jane feigns surprise and says there must be a key and proceeds to search for it, in order to stall for time to print the copied codes from the other meeting. She claims mistake, it is a combination not a key and proceeds to enter the code, only to have Hendricks instruct her to tell him. Hendricks takes the codes from inside the case and hands them over to Lisenker to confirm the authenticity. Once Lisenker has verified the codes Hendricks immediately grabs them and walks out of the room, without saying a word and with Lisenker in tow. In the hall, he calls the real Wistrom and orders him to release Lisenker's family, as promised, but what he really means is kill them. He then takes out a silenced pistol and shoots Lisenker with it, telling him he will meet his family in death. He then enters the elevator, which Benji slows down again to allow Ethan to catch up with Hendricks and pursue him.

Hendricks realizes that Ethan is following him and flees into the streets of Dubai as a sandstorm approaches the city, decreasing visibility to a minimal level. The criminal almost manages to escape in this sandstorm except for the short range tracker Ethan has in the suitcase. After stealing a car he crashes into Ethan while trying to escape, who initially does manage to hold on but falls off soon. Hendricks has almost escaped, but the spy does not abandon the pursuit and steals a car himself which he uses to collide with Hendricks vehicle. Hendricks and Ethan both survive but are injured and struggling, Hendricks manages to get far enough away from Ethan and jump on the back of a truck that Ethan cannot catch. As he moves further away from Ethan, he removes his latex mask and reveals he is Hendricks.

With the real Wistrom, Hendricks now travels to Mumbai, India, to access a purchased and private Russian military satellite and implement his plan, for which he now has everything he needs. When he enters the relay station from which he plans to launch an attack, a security guard greets them and asks if he can help. Hendricks replies that this is probably not the case and Wistrom kills the man. At the relay station, Hendricks and Wistrom activate the satellite and re-configure it to its original military objectives.

Once the satellite is ready, Hendricks isolates a nuclear submarine, supposed to launch a rocket that targets San Francisco. He activates the starting sequence and confirms the order when the Russian submarine captain follows protocol. After Hendricks has confirmed the launch order, the rocket is fired. As Hendricks and Wistrom leave the relay station, Ethan and Jane arrive and when Hendricks sees them, he orders Wistrom to disable the relay station while he escapes with the control unit. He flees into the city to lose Ethan in the fray. Meanwhile, Wistrom runs back into the relay station to take it offline, with Brandt, Jane and Benji in pursuit.

Ethan catches up to Hendricks in an automatic parking garage and Hendricks, after being beaten by Ethan, jumps from a high floor of the garage with the device in his arms in an attempt to bring it outside Ethan's reach and ensure the missile's detonation, mortally wounding himself in the process. Ethan manages to strap into a car and survives the fall thanks to an airbag. He then crawls to the case to hit the big red abort button, which does not seem to work, but after Benji kills Wistrom, Brandt brings the relay station back online and Ethan is able to use the launch control device to abort the missile, letting it crash into the San Francisco Bay. Hendricks watched his plan fail as he lay there dying.

Kurt Hendricks believed that the "world destruction is an unpleasant but necessary part of evolution" and he wondered him what was going after the end of the humanity. Thus, he felt invested by a mission to provoke an armed conflict between Russia and the United States in order to destroy the world and to establish peace. This shows that Hendricks is a misanthropic man and extremely dangerous and ruthless because if his plans had been accomplished, he would have been responsible for millions of deaths and he did not care what it was all about. Like any great fictional villain, the terrorist was also determined to achieve his goals. In addition to that, Hendricks was cruel even when it seemed pointless as demonstrated by the fact that he killed Leonid Lisenker in cold blood when he survived his usefulness.

Being a former special forces soldier, Kurt Hendricks was trained in hand-to-hand combat as shown in the final scene where he had fought Ethan Hunt in the vehicle assembly garage before committing suicide by leaping from the top floor while taking the launch device with him in order to ensure that Ethan would never get it on time until he found a way to reach it.

In addition to that fighting style, he could form a strategy to instigate a nuclear conflict between Russia and the United States. Hendricks could also arrange the destruction of the Moscow Kremlin so he would steal the launch control device while placing the blame on the IMF. 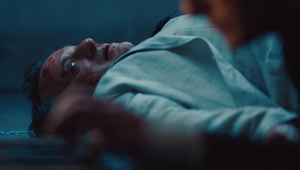