Attacking anyone and anything that stands in its way.

Destroy Sora and his friends (failed).

Dark Monster
Kurt Zisa is a minor antagonist, as well as one of the optional bosses, from the video game Kingdom Hearts. It is an Emblem Heartless that attacks Agrabah.

Kurt Zisa is six-armed beast with a brown and black segmented body. Its head is golden and it bears a strong resemblance to the cobra head on the evil sorcerer Jafar's Snake Staff. It wears a white sleeve trimmed in gold on each of the arms, a white tunic with puffy gold sleeves over its oddly-shaped upper torso, and white, gold-and-turquoise trimmed pants on its lower body; around its waist is a brightly colored sash in turquoise, decorated with bright orange tassels and a gold apron bearing the Heartless Emblem. Its feet appear to be clad in gold and brown shoes at first glance, but the toes are curled into fierce hooks that point down towards the ground. Each arm ends in three sharp segmented talons.

The Kurt Zisa is a skilled oppenent, proficient in swordplay and magic. It can twirl its swords around to deflect attacks and slash enemies. It can also use a spin attack, both horizontal and vertical. It is also a skilled spellcaster, able to defend itself with an anti-physical shield of energy. It can also create a tornado by lifting its hands and create fireballs to act as mines.

The Kurt Zisa fights in three phases, each one granting it different attacks.

In stage one, the Kurt Zisa wields two glowing spheres in each of its top hands. Magic is unusable for the group, even for Sora. The Kurt Zisa uses nothing but physical attacks in this form. The spheres in its hands must be destroyed. Once destroyed, magic will be available to the party again and battle will fall into stage two.

In stage three, the Kurt Zisa will protect itself with a shield and float. As it hovers around the arena, it will summon tornadoes to cause damage to Sora and make fireballs rise from the ground. Sora can only damage the shield through magic or hitting fireballs it summons back at it. Summon and Thunder spells work well against the shield. If attacked physically, the shield will drop MP balls. When the shield is destroyed, the Kurt Zisa will go into stage two again. After a while, stage one will commence again with the Kurt Zisa adding a spinning horizontal/vertical blade attack. If the player wants to save MP and doesn't really care about time, he or she should wait until the Kurt Zisa summons fireballs and then hit them. They will automatically go towards the Kurt Zisa, track its movement, and damage the protective barrier.

The battle continues like this until the Kurt Zisa is defeated.

Since the Kurt Zisa is a rather difficult boss to defeat, it is highly suggested to Summon Tinker Bell right before Magic is unusable as she can keep party members healed and revive Sora once if all his health is drained in battle. Another option is to cast whatever variation of Aero you have before Silencega is cast so damage from the Kurt Zisa's attacks are reduced while your magic is sealed. Having Aerora or Aeroga allows you to inflict more damage on the Kurt Zisa if the shield is in range of the Kurt Zisa's hands or head, as well.

Another strategy to get past its shield mode quickly is to either summon Mushu, Genie, or Dumbo and use Water, Fire, or Showtime to nail through Zisa's shield.

Alternatively, the player can summon Bambi and nail it with offensive spells while he supports you with magic orbs. 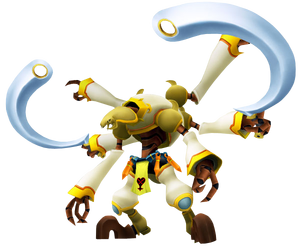