Eat whoever he encounters.

Man-Eating Youkai
Kusaregedo (in Japanese: 腐れ外道) is a character and minor antagonist from Samurai Shodown V and Samurai Shodown VI. He was a former human turned ghoul, has no recollection of his former life, and haunts Japan to satiate its cursed hunger by eating humans.

Kusaregedo was once a normal human being who lived a life with his daughter Hakana. Hakana came to respect her father as a kind man. His life was happy but very impoverished. Then a disaster struck: a great famine ravaged his nation, people are either starving to death left and right, or committing atrocious crimes to feed themselves. Kusaregedo, already a poor man with never having enough foods in his life to begin with, had to put up with his worsening starvation. Unable to endure his hunger any longer, Kusaregedo had a choice: die of starvation or eat whatever edible to live. He discarded his own morality and was forced to consume dead human fleshes to soothe his hunger. But the famine lasted far longer than anyone anticipated, and Kusaregedo, as he consumed more dead human meats, began to develop cannibalistic habits (especially the flesh of children) and continued to feed on human meats. Then one day, when he woke up from his sleep, he became a Preta (Buddhist equivalent to Ghoul, that are cursed to suffer an eternal hunger) and lost all memories he had when he was a human.

When the gate to Makai is opened by the Dark Emperor he immediately starts to search for food. He gets the scent of a young girl, Rimururu, and decides to give chase to her, intending on eating her. On his ending he cathes up to Rimururu, who was left unsconscious, but before he could eat her he is stopped by Hakana, who weeps for her father's horrid mutation, rescues Rimururu and pledges for him to stop eating people and come back home with her in an attempt to bring back the man she once cherished. However, Kusaregedo, as said before, barely has any recollection of his past life and, giving in to his hunger and deciding to eat her instead.

Kusaregedo returns in SS VI, still looking to satiate his gnawing hunger. SS VI 's storyline is a parallel world based on the events of Samurai Shodown V and previous games in the series.

In his ending he ends up devouring all contestant fighters he comes across with. He becomes a dreadful fairy tale / urban legend in Japan through rumors, as no human who encountered Kusaregedo had ever lived to tell a tale about him and now is feared as an enigmatic man-eater. Thus he came to be known as a fearful and mysterious being who spread fear and death wherever he went. People pray that they would never have a misfortune to encounter this being.

Kusaregedo is a giant, deformed monstrous creature, with many of his bones exposed. His weapon of choice is an exposed bone on his arm (presumably his ulna or radius) sharpened approximately at the wrist to form a spike or blade. He is the only fighter in Samurai Shodown series to utilize his own body as a weapon so his way of losing weapon involves having his arm cut off and retrieving fallen weapon involves reattaching his severed arm. Kusaregedo's large size weighs down his speed and jumps, as well as making him an easy target if his attacks miss.

Kusaregedo is motivated solely by his insatiable hunger, fanatically searching for more people to eat. His hunger is infinite that at times he even chews down his own fleshes in a futile attempt to appease it. Fitting to his great size, Kusaregedo his extremely powerful monster who can take down his opponent's vitality from full to nothing in mere seconds if players do not pay attention to their characters' vitality bars.

As Kusaregedo's character is a cannibal, many of his attacks center on eating his opponents. His final attack called Gedo's Supper, which was censored for international release, has him dragging his opponent to the outside of screen, saying "bon appetit!" completely devouring his opponent whole save for their skull or hair. After that he says "good meal!" 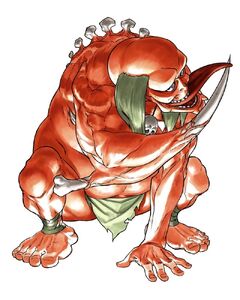 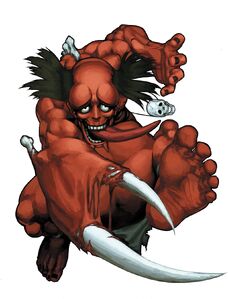 A early concept for Kusaregedo. 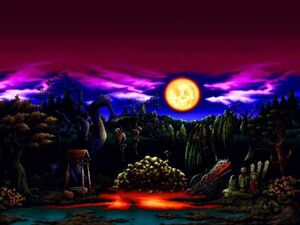 Kusaregedo's stage at night.
Add a photo to this gallery

Retrieved from "https://villains.fandom.com/wiki/Kusaregedo?oldid=3890336"
Community content is available under CC-BY-SA unless otherwise noted.