Kwiz Kid is a villain from the Teen Titans media. He does not appear in the show. Instead he appears in the comics that are based on the show, called Teen Titans Go!.

Kwiz Kid has the ability to make quizzes and riddles pop up all over places and if the person gets the answers wrong then they cause harm. 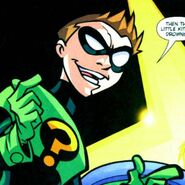 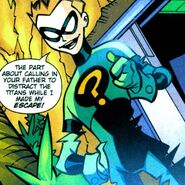