Totalitarian Mastermind
Kycilia Zabi (in Japanese: キシリア・ザビ, Kishiria Zabi) is an admiral in the Principality of Zeon's military and a major antagonist in the Mobile Suit Gundam anime series. She is the only daughter of Degwin Sodo Zabi and the head of Zeon's Mobile Assault Corps.

She was voiced by Mami Koyama in the Japanese version, and by Michelle Porter in the English version. In The Origin, she is voiced by Akeno Watanabe in Japanese and Wendee Lee in English.

Not much is known about Kycilia's youth, but she is known to have grown up on Side 3, where she first met Johnny Ridden.

During the Battle of Loum, she ordered her fleet to withdraw as soon as the main engagement was over, allowing her brother's fleets the "glory" of mopping-up the Federation's retreating troops while preserving the lives of the men under her own command. A veteran of the battle, Lt. Cdr Gerhart Schmeisser (who had been too seriously wounded in the fight to continue active combat piloting), approached her during the Antarctic Treaty cease-fire. He proposed the formation of a small Earth-bound covert-operations unit, to be named the Midnight Fenrir corps. She immediately approved.

In the latter half of the One Year War she took Char Aznable under her wing after Dozle Zabi dismissed Char from his regiment for failing to protect Garma (Though she would later figure out the truth behind her brother's death and Char's true identity). With her support, Char proceeded to form the 300th Independent Corps, gathering Newtypes from Zeon-held territory and prototype mobile armor Elmeth from the Flanagan Institute.

When Degwin attempted to negotiate a peace with the Federation's General Revil, Kycilia was en route to the location with her fleet in case the negotiations failed. Her fleet's sensors picked up the IR signature of the firing of the Solar Ray, but she was unaware of the death of her father until Gihren told her, also claiming that the firing of the weapon was an accident.

As the opening shots of the Battle of A Baoa Qu were fired, however, Gihren Zabi finally confessed to Kycilia that he killed their father, Degwin. Kycilia promptly executed Gihren with a single shot to the head for the patricide, and took control of all Zeon forces during the battle. As the defenses began to falter, she gave the order for the Zeon forces to retreat, and for the defenders of A Baoa Qu to surrender 15 minutes after her escape. Just before she left, however, Char Aznable decapitated her by firing a bazooka through the window of the Chimera, her flagship. The ship was destroyed only moments later by Federation warships, the crew unable to communicate Char's treachery to the fleet. Without her leadership, the Zeon fleet rapidly fell into disarray, with individual commanders recovering what suits and pilots they could, then fleeing; others fighting to the death, believing their commander to still be alive but unable to escape.

Kycilia is portrayed ambiguously during both the main series, and the various side stories surrounding the One Year War, with her motives often open to question. On the one hand, she is shown to be fiercely loyal to the people of Zeon, and to the men under her command. Many of her actions, however, can also be interpreted as those of a charismatic, but utterly merciless manipulator of the highest order, preparing for a military coup.

She was quick to adapt to the changing technology of the One Year War, and was equally proficient in gathering intelligence for use against the Earth Federation. She was in charge of the Principality's mobile suit forces, and was responsible for their use against the Federation. In addition, she was responsible for the creation of numerous elite mobile suit units, including Char Aznable's 300th Independent Corps (aka "Char's Newtype Corps"), the hand-picked Chimera Corps and the Midnight Fenrir covert ops team. 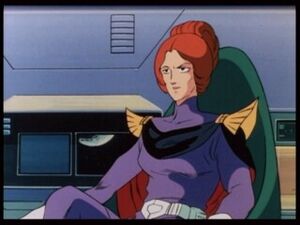 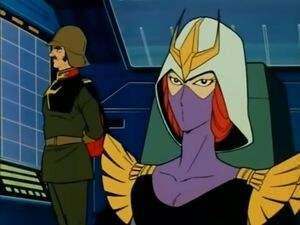 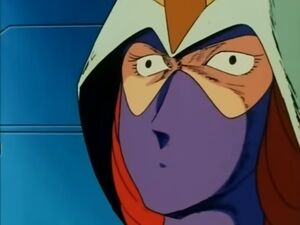 Kycilia realizes Char is aiming a beam rifle at her. 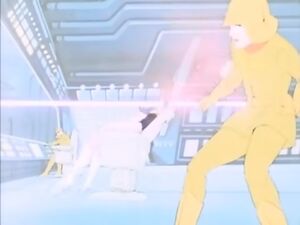 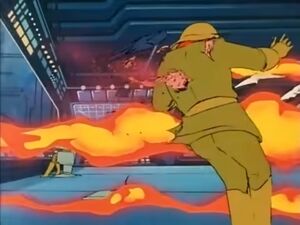 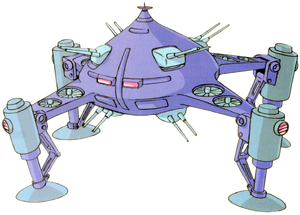