Kyd Wykkyd is an antagonist in the Teen Titans media. He is the most mysterious member of the H.I.V.E. Five, not speaking and rarely interacting with the other villains.

When the Brain executed its plans, Kyd Wykkyd was sent with Psimon to defeat Raven. They succeeded in overpowering her and with Psimon's psychic powers, creating a portal, sent her to an unknown region. However, Raven returned and brought reinforcements. During the final battle against the united Titans in the Brotherhood's base, Kyd Wykkyd and his H.I.V.E. Five mates attempt to escape but are stopped by Kid Flash and are knocked out by a hex from the reformed Jinx, and is flash frozen with the rest of the villains.

He first appears in "Nose Mouth", in Robin's Dream. He is one of the Several villains surrounding Starfire, Before Robin promptly arrives and defeats him with his staff.

He is later seen in "I'm The Sauce" drinking chocolate milk with the Teen Titans and the other villains after their game of Heads-Up Seven Up, and once again in "Black Friday" running over Starfire while shopping.

Kyd Wykkyd's main power is teleportation. He can teleport himself and anyone in contact with him, or for creating a hole in any surface of something by touching the material. That and his strong skill of stealth make him an expert in doing sneak attacks. Attack-wise by using offensive attacks, Kyd Wykkyd's cape has sharp edges that are capable of cutting through massive steel structures and other metals. 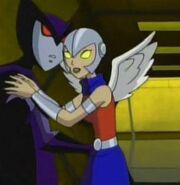