Spending time in the Kawatche Caves.

Being with Clark Kent.

Stop LuthorCorp from building on Kawatche lands by any means necessary (succeeded through Clark).

Kyla Willowbrook was a hidden villainess from Smallville, appearing in Season Two's "Skinwalker".

She was portrayed by Tamara Feldman, who also portrayed the villainous Angela Mason in "Children Shouldn't Play with Dead Things," from the second season of Supernatural.

Kyla was a lovely Native American and member of the Kawatche tribe. She opposed LuthorCorp's intention of building on the Kawatche lands. She was a "skinwalker" with the ability to transform into a wolf.

Kyla was from the Kawatche tribe, a tribe consisting of Skinwalkers, giving her the ability to change into a beautiful white wolf at will. To prevent Luthorcorp from doing construction on Kawatche land, she shifted into her wolf form and went after Dan Hammond, a foreman for Luthorcorp, which resulted in his death.

Clark Kent discovers an underground cavern after suffering an accident on his dirt bike. After being thrown off the bike, he falls through a weak patch of earth, plummeting into the cave.There he meets Kyla, a Native American girl studying the cave drawings.

Kyla encountered Clark Kent after he fell into the Kawatche caves, suffering an accident on his dirt bike and developed feelings for him, which were reciprocated. Clark learned that the Kawatche had been visited by Kryptonians centuries ago and that the paintings predicted he would arrive and save the world.

From the moment she met him, Kyla realized there was something special about Clark and - after he shielded her from a collapsing rock that actually broke against him rather than hurting him.

She came to believe he was Naman, a cosmic deity from the stars that had been prophesied to journey to Earth. One of Clark’s major fears was that he would never be accepted for who he is, but Kyla discovered his identity and loved him anyway.

Clark tried to help Kyla preserve the caves from a LuthorCorp construction project.

Her passion for the preservation of the caves and her lack of self-control in wolf form, led her to attack several LuthorCorp employees. Though her intention was to scare them into leaving the caves untouched, not to harm anyone, however, Kyla attacked Clark's mother, Martha, in her wolf form at a parking lot.

Since wolves have been extinct in the Smallville area for decades, Clark and Chloe investigate into Kawatche mysticism and learn of skinwalkers. When a wolf terrorized construction workers, Clark learned that Kryptonite had given some Kawatche throughout history the ability to turn into wolves.

Kyla's rage increased when her grandfather, Joseph Willowbrook, was accused of killing Hammond, and Clark suggests the theory to her due to Joseph also being a skinwalker.

An upset Kyla goes after Lionel Luthor himself, but Clark (thinking that the wolf is Joseph) arrives to stop her. Kyla escapes through a window, only to be fatally wounded by a shard of glass.

Clark discovered the wolf's true identity when she shifts back to her human form in front of him. She expressed remorse over her actions, stating that she didn't mean to harm anyone, and apologized that she couldn't be the one for him, calling him "Naman" right before dying peacefully in Clark's arms.

Her grandfather Joseph later gave Clark Kyla's bracelet, telling him to give it to the one he was destined to be with, which would turn out to be Lois Lane. 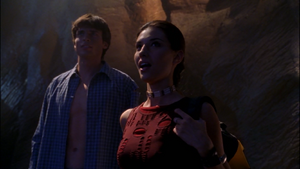 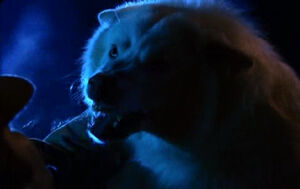 Kyla in her white wolf form.

Kyla reverting to her human form.