Leader of the Hermits

Training his goons with the Blue Evolve.

Use Blue Evolve to defeat the Chimeras.

Overthrow the government of Sector V.

Kyle Merkulov is a minor antagonist of the 2019 game Astral Chain. He is the leader of the Hermits, a rogue gang of hackers that rule over the abandoned District 09.

He was voiced by Takaki Ootomari in Japanese and the late Brad Venable in English.

Kyle took over the Hermits after the previous leader and founder mysteriously disappeared. In the game, the player and Hal are sent by Yoseph Calvert to track down a certain drug that will help enhance their powers in fighting the Chimeras called Blue Evolve. Their search leads them to Zone 9, where Hal believes the drugs are being manufactured and disguises the player to not give away their identity of a Neuron cop. Talking to the residents leads them to the abandoned District 09, converted into the headquarters for the Hermits. Unable to bypass the highly guarded entrance, the player and Hal use the ducts to sneak into the building.

Inside, they spot a Hermit battling a Chimera, where Kyle comes out to spectate the battle. Once his soldier defeats the beast, Kyle complements that with the batch of Blue Evolve in their hand, they will fight back against the Chimeras and the Centrals "above" them, referring to the player and Hal in the ducts. With nowhere else to go, the player and Hal reveal themselves. After introducing himself, Kyle tells the intruders that he carries no state or economy, only information. He offers to tell them anything they want if they can show their worth and summons a hoard of Hermits to battle the player. Once the player defeats the Hermits and Kyle, he admits defeat and brings them to his lounge. There, he tells the player and Hal that he and the Hermits will give them the drug samples if they help him find their missing client, Douglass.

After the player rescues Douglass from a gate leading to the Astral Plane, Kyle grabs his case full of the Blue Evolve and thanks the player for helping him out before handing the serum out to the Hermits. Before Kyle could drink his serum, the other Hermits painfully turn into Chimeras, as the serum was tainted by Yoseph Calvert. Unable to bring himself to attack his own teammates, Kyle is knocked unconscious.

At the end of the game after defeating Noah, the epilogue reveals that Kyle survived and he and the other Hermits are helping Hal in restoring Zone 9.

Kyle Merkulov appears in Super Smash Bros. Ultimate as a spirit, first introduced in the "Chain the Future to Spirits!" event. He is an Advanced level support series that grants the user stronger trade-off attacks when used. In his spirit battle, the player must face Cloud with a team of three Sheiks on the New Pork City stage with the hazards turned off. Here, the enemy's attacks will be strengthened when they take a high amount of damage, reinforcements will appear when an enemy is defeated, and explosive items spawn commonly. 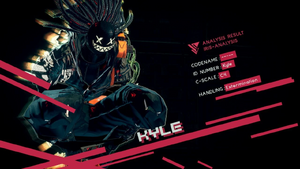 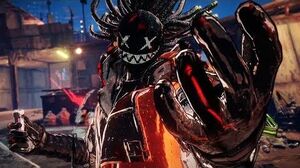