Kyle Nimbus, nicknamed The Mist by Cisco, is an antagonist in the first season of The Flash. He is a meta-human, having gained the power to transform into poisonous gas.

He is portrayed by Anthony Carrigan, who also portrayed another DC villain - Victor Zsasz - in the TV Series Gotham.

After becoming aware of his new powers, Nimbus kills the treasonous members of the Darbinyan crime family while they are dining in a restaurant. Posing as a waiter, Nimbus locks the room before releasing his deadly mist, killing every member of the family present. At first, the police expects that the gas was pumped inside the room from outside but when witnesses claim that there was no one outside, Joe and Barry Allen contact Harrison Wells, Cisco and Caitlin. Eventually, Caitlin finds DNA inside the body of the victims, causing her to wonder how another person`s DNA got into the person's body. Barry realizes that the murderer does not control gas but becomes gas.

At the same time, Nimbus attacks Theresa Howard, the judge who sentenced him to death, inside an elevator at a shopping center, killing her. When Barry heads there, he finds Nimbus leaving the building via an emergency exit and confronts him. Barry asks Nimbus why he killed the woman, but Nimbus tells him that she deserved to die. He claims that there is still one person on the list and that he would rather not put Barry on the list too. Barry then attempts to strike Nimbus, but Nimbus merely morphs into gas. Barry tries to fight, but can't hurt Nimbus due to the latter's gas form. Eventually, Nimbus enters Barry's lung, choking him. Barry returns to Wells and his team in time to be saved. Though Barry is weak, he survives and additionally has brought the team a sample of Nimbus' gas.

When they find out the identity of Nimbus, they realize that Nimbus is murdering those who had part in his "death". Knowing this, they find out that Nimbus' last victim is Joe, who is at Ironheights Prison right now, meeting Barry's father. While Joe talks to Barry's father, Nimbus enters the room in his gas form and chokes out a guard. He then returns to his human form so Joe can recognize him before morphing once more and choking Joe, while Barry's father can only watch. Having drained the oxygen out of Joe, he leaves the prison through the air vents. Barry arrives seconds later, injecting Joe with the antidote to Nimbus' poison.

Nimbus is then incarcerated at Star Labs' particle accelerator which was turned into a makeshift metahuman prison by Wells.

During the journey, Mardon and Nimbus argue and a fight almost ensues. It's prevented when the truck arrives at the air-place. However, as Snart had previously tampered with the device preventing the metas from using their powers, they soon realise that they can use their powers again. Mardon creates a thunderstorm and the airplane intended to bring the metas to Lian Yu is hit by lightning and crashes. The metas then escape from the truck. While Joe opens fire at the metas, Nimbus becomes gas and attacks Barry whereas Shawna quickly flees the scene. Barry eventually defeats Nimbus by moving his arms so fast that they create a suction, forcing Nimbus to return into his human form. Bivolo uses his power to force Caitlin to attack Cisco while Simmons shoots his lasers at everyone moving. While Barry evades Simmons, Mardon strikes him with a lightning bolt. Before Simmons can finish Barry, he is shot in the face and killed by Snart's cryo-gun, as Snart claims that Simmons owed him money. When Bivolo tries to use his powers on Snart, he is stopped by Lisa who aims her gun at his head. 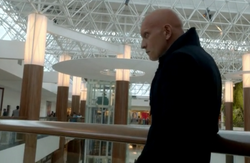 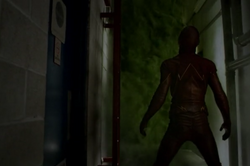 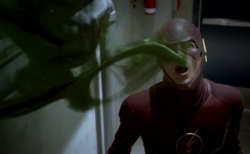 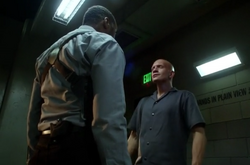 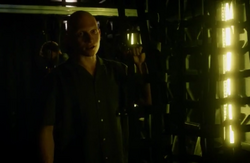 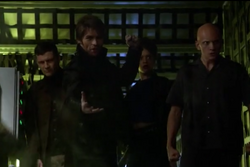 Retrieved from "https://villains.fandom.com/wiki/Kyle_Nimbus?oldid=3527076"
Community content is available under CC-BY-SA unless otherwise noted.