Schneider was originally an architect forced by Outer Heaven to design their barracks. Drawing the line when his wife and child died, Schneider formed and led a resistance group against the PMC and used his military genius to plan the resistance's next movements.

When the FOXHOUND rookie operative known as Solid Snake was assigned to rescue a captured peer imprisoned by Outer Heaven, Schneider provided the agent with intelligence about the internal structure of the base, as he was the head of its construction. Kyle was originally presumed deceased after Snake lost his frequency, as the resistance leader was just about to reveal the true identity of Outer Heaven's president, who was later found out to be Snake's commanding officer. (Or so it seemed)

However, Snake's assumption of Kyle's death was later revealed to be incorrect in 1999, where the former was called back in the field to intercept Zanzibar Land. After the fall of Outer Heaven, Kyle was saved from NATO's bombing run by Big Boss, where, after witnessing the deaths of both resistance members and war orphans, he began to hate the US. Afterwards Schneider became a part of NASA experiments to make him a super-soldier, injecting him with strength-granting drugs and forcefully toughening him up to be the ultimate ninja. This granted him his codename Black Ninja. After Black Ninja's unit was disbanded, having him retreat and join Big Boss' Zanzibar Land PMC where he became a skilled assassin. As far as the rest of the world was concerned, Black Ninja joining the Mercenary War in 1997 led to people knowing of his existence, but nothing of his past.

Black Ninja forgave Big Boss, who was the one behind the former's imprisonment as an architect, as the Zanzibar Land president took pity on him and his men and granted them food and shelter. Indeed, he seemed to almost worship Big Boss as his one true leader. After it was discovered that the kidnapped Dr. Kio Marv had a FOXHOUND transmitter in one of his teeth, Black Ninja was assigned to assassinate any FOXHOUND member who tried to rescue him. After disguising himself as Marv, Black Ninja confronted his former ally, Solid Snake, who was the one sent to rescue Marv, but was defeated despite his enhanced physical condition. Moments from dying thanks to his mortal wounds, the Black Ninja revealed to Snake his identity, where the real Marv was, and that Big Boss was the sole man behind Zanzibar Land's formation, knowing that telling Snake this was what Big Boss would've wanted. 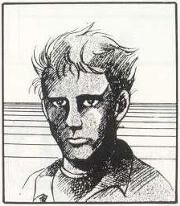 Kyle during 1995 before becoming the Black Ninja