To obtain the Light of Zartha and conquer Planet Zartha (failed)

The Kylothians are a malevolent race of strange plant-like aliens from the planet Kyloth. They appear to be entirely made of small tentacles, which are wrapped around each other. Only one Kylothian is known, Serleena, who is their Queen and the primary antagonist of Men In Black II. She comes to Earth looking for the Light of Zartha to conquer or destroy the planet Zartha and the Zarthans. When Serleena arrived on Earth, she represented as Kylothian worm. But this worm knew that she can't travel through New York by this form. But for her luckiness, she found a magazine, where she saw a photo of Lara Flynn Boyle of Victora's Secret. So, the worm starts to multiply in many other Kylothians to form a human female body. In the end, the Kylothians' plan failed when Serleena was stopped and destroyed by the Men In Black Agents Jay and Kay.

Kylothians are extremely small, roughly the size of an earthworm, and as long as one. They are aggressive and can shapeshift to any form and size using the tentacles. To match this, their ships are the size of a tin can. Despite the size, they are extremely aggressive, being able to scare away a dog over 200x its size. 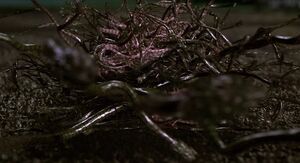 A Kylothian beginning to transform into a human.