Being recognized in his talents.

Kyogai, also known as the Drum Demon, is a supporting antagonist in Demon Slayer: Kimetsu no Yaiba anime and manga series. He was a former member of Twelve Demon Moons and the former Lower Six, until he was driven out by Muzan Kibutsuji due to his weakness. He later went on a quest to reclaim his title. He serves as the main antagonist of the Drum House Arc.

He is voiced by Junichi Suwabe in the Japanese version, and by Steve Blum in the English dubbed version.

While being a bloodthirsty oni/demon, Kyogai is actually very collected and soft-spoken, and always mummurs things that irritate him. He is also shown to be intolerate towards rudeness and will kill anyone who barge into his house. Even so, if irritated enough, Kyogai will raise his voice about the nuisance and insult his opponents. But deep down, Kyogai is an insecure man who desires to be recognized by the world through his writing skill.

Kyogai was once a human who aspired to be a writer. Unfortunately not only there was no one to understand or appreciate his dream, people sneered and outright ridiculed his talent. To make matters even worse, his skill at drum which he practiced as a hobby in his spare time, was also mocked and unrecognized. Life as a human was a struggle for Kyogai who suffered being constantly ignored. Then at some point in his life, he met Muzan Kibutsuji, received his blood and turned into an Oni.

In spite of being an Oni, he was still attached to his human dream of being a writer. So he hid his newfound powers and continued to live among humans. Then one day he showed his completed scripts to his editor, hoping for positive feedback. But Kyogai's editor not only verbally insulted Kyogai by denouncing that Kyogai's work is a waste of papers and pencil, but trampled Kypgai's scripts with his foot. That was the last straw for Kyogai. Consumed with demonic urge, Kyogai turned Oni and brutally slaughtered his editor.

Giving up on being writer and human altogether, Kyogai devoured as much humans as he could since, becoming stronger and elevating himself onto one of the Lower 6th rank in Twelve Demon Moons. But somewhere along the line, he slowly began to consume less and less humans - a sign of Oni reaching his evolutionary limit. Discovering that Kyogai had reached his limit, Muzan stripped Kyogai of his title of 6th Lower Ranker of Twelve Demon Moons. Relegated to his manor and weakened due to him reaching his capability limit, Kyogai sought how to reintegrate into Twelve Demon Moons. To fulfill his wish, humans with special type of blood - blood that possesses nutrition value 100 times that of ordinary human blood. A human boy named Kiyoshi possessed such blood, and he would seek the human boy to devour him. 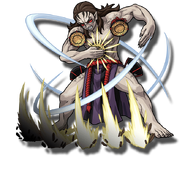 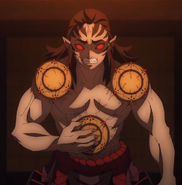 Retrieved from "https://villains.fandom.com/wiki/Kyogai?oldid=4098555"
Community content is available under CC-BY-SA unless otherwise noted.